How queer and poly partnerships can benefit straight marriage 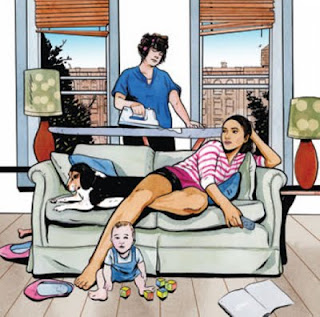 Just as New York becomes the newest state to legalize gay marriage, the weekly New York Press looks at the benefits that an alt culture of gay and poly partnerships can bring to conventional marriage — an institution that has been on shaky ground for decades, and that needs to evolve to serve even the most normal people better if it's to regain its footing.

From gender-role squabbles to non-monogamy: What straight couples can learn from same-sex couples to be happier in their own marriages.

Andrea Reese and Alice Ro have been engaged for just over a year.... One of the ceremony's guests will be Andrea's ex-husband, John. He is, by Andrea's own admission, a "great guy," to whom she was married for four years (they had lived together for five years prior). They ultimately parted because they had lost the feeling of being a romantic couple and had become much more like buddies. "We have maintained a close friendship," says Andrea. "He's a big fan of Alice, and Alice and I are glad to have him at our ceremony."

Maintaining close ties to one's exes is a relationship dynamic fairly common in the LGBTQ community.... But maintaining close ties with former lovers after beginning new, committed romantic relationships, especially marriage, is only one of many unconventional relationship constructs — unconventional for opposite-sex marriages, at any rate — that same-sex couples are likely to import into the institution of marriage. And that's not necessarily such a bad thing.

At least not according to Stephanie Coontz, co-chair and director of public education at the Council on Contemporary Families. Coontz, along with other experts, believes that the ways in which young, opposite-sex couples view marriage have changed substantially over the past several decades. And if the experts are right, then, as ironic as it may seem, it could turn out that these "conventional" couples may just find their best role models for the sorts of marriages they want to construct by looking at those of pioneering same-sex marriages.

...Although gender roles within marriages have been evolving over the last few decades... same-sex relationships come even closer to the egalitarian ideal that Coontz asserts young people strive for, because they are entirely free of any conventions to begin with.

..."Well, of course we structure our relationships and marriages without strict hierarchies and defined gender roles," says Barbara Carrellas, sex educator and author of Urban Tantra Sacred Sex for the 21st Century. "We have to, by default." Carrellas, who identifies as queer herself, believes that what is most interesting about that dynamic is not the actual division of labor but the joint, conscious process through which the relationship is negotiated and co-created. She feels that this is the aspect of LGBTQ relationships most valuable to opposite-sex marriages as a model for loving partnerships.

"People, unmarried people looking to be married, have this idea that they know what marriage is, but they don't. How could they?" she explains. "Most people go into marriage with a view that they have constructed by themselves based on certain goals that society holds out in front of them, and then wonder why they have such a difficult time obtaining those goals or discussing them with their partners."

...Varied approaches to sexuality is probably the most taboo of the constructs that same-sex couples may import into marriage, and one that Coontz approaches very delicately. "I want to be very careful about how this is phrased, but there is a prevalence among some same-sex relationships, particularly gay male relationships, to establish long-term commitments while allowing for nonmonogamy," she says. "While this is not for every opposite-sex couple, just as it is not right for every same-sex couple, it is one of the ways that some people may handle the pressures of a world where people want partnerships but live long lives and have frequent opportunities."

It was just such frequent opportunities that led married New Yorkers Kurt Walters and George Karabotsos, both 48, to open up their relationship sexually. They were monogamous for the first three years of their relationship, but finally began to question whether or not it was the right choice for them....

Thirty-nine-year-old New Yorker Mikey Rox [says] "I prefer removing the temptation by allowing my partner and me to explore, provided we are both on the same page about it and have established rules." For Mikey, it lessens the chances that his marriage will dissolve.

But is this a model that same-sex couples should be frightened of? "Quite the contrary," says Manhattan-based psychotherapist Bob Bergeron, author of The Right Side of Forty: The Guide to Happiness for Gay Men at Midlife and Beyond. "Same-sex couples might not necessarily want non-monogamous relationships, but they can learn a great deal from non-monogamous, same-sex couples about how to talk to their partners about sexual desires inside and outside of the relationship." As Bergeron explains, "talking about your desires doesn't mean you act on them, but not talking about them can create more trouble."

"Don't knock it until you've tried it," Carrellas says of non-monogamous marriages.... "An open marriage might not be for you, but perhaps there is some other area in your marriage where you could use, to your benefit, the same tools that some other couple is using to negotiate their sexuality."...

Incidentally, one of the more endearing things to me about the poly world is people's tendency to be long-term friends with their exes, as in the article's lead (not always possible of course, and often best done after a healthy interval of no contact). If you don't buy into the myth that One Right Person exists who has to be your everything, then you don't have to shun a person you loved as a Totally Evil Mistake if things don't work out. In poly, you don't have to extremify.

Thanks so much for posting, this is great! The institution of marriage can only benefit from acknowledging the fact that human sexuality is diverse and complex, and that individual situations require individualized relationships.

"...you don't have to shun the person as a Totally Evil Mistake if things don't work out. In poly, you don't have to extremify." Very, very well said, Alan.
I'd like to quantify that point, if I may, by providing an example. One tribe I was in involved seven people. One of the two points of the tribe, a husband and wife, passed away. He was my boyfriend's wife's boyfriend. It was sad and there was a whole huge mess that came in the aftermath (including my eventual decision to end my romantic relationship with my boyfriend & his wife), but two shining points that have been marked in beautiful, sparkly paint are my good fortune in maintaining a very close friendship with my ex-boyfriend & his wife, and also the wonderful new friendship that I expect to last forever with our dearly departed's widow, her boyfriend, his wife, and their daughter.