And the media attention to the new poly apartment building in Brooklyn continues to spread.

Leon Feingold, Open Love NY co-president and the guy behind the project, writes, "Hey Alan! Hope all's well. The interest in the polyamorous house has gone global." In the Netherlands: Dit huis is gemaakt voor seks. As Google Translated into English,


This House Is Made for Sex

In the New York borough of Brooklyn is a building that is for swingers. If you want to live with your partner, you should be aware that he or she is with another resident dives into the suitcase.

The Hacienda Villa... building is an initiative of Open Love NY, an organization that encourages polyamory. That is a way of life where people love and sex relationships engage with more people. The Hacienda Villa are only polyamoristen welcome.

"It is very important to us that people who are considering coming to live the lifestyle of the other residents respect here," explains co-founder Leon Feingold Open Love NY out of the New York Post. He has snared six tenants.... At this moment they are just friends, but that may just be different tomorrow.

The original story in Dutch (May 18, 2014). A Dutch speaker tells us the piece reads more friendly than snarky.


Roomies with Benefits: Brooklyn Building Caters to the Polyamorous

For those out there who think “love stinks,” maybe you’re just doing it wrong.

A three-story Bushwick building is being converted into a judgment-free living space for polyamorous lovers. According to the Poly Lexicon, polyamory is defined as “the non-possesive, honest, responsible and ethical philosophy and practice of loving multiple people simultaneously.” It’s like MTV’s The Real World only without the jealousy, the fighting and the douchebaggery.


From Mischa Lin, also a leader of Open Love NY: "Fantastic story on Bustle.com — and a great rebuttal to all the sensationalist reporting from other outlets:"


NYC'S first polyamorous-only apartment (building) is here, and it's nicer than your place 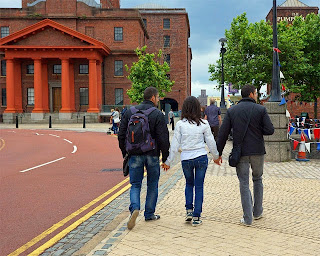 Polyamory may not be for me, but it works for plenty of people....

...Although a rather depressing number of media outlets are calling Hacienda Villa a “love shack” and a “swinger’s apartment” (New York Post and Daily Caller, I’m looking at you), Feingold is adamant that the building is anything but. “It’s not a sex-fest,” he told the Daily News. “It’s not a place to come and get your freak on. It’s a place to come home to.”...

...The house’s first resident, a 40-year-old scientific researcher named Lily who had her first poly experience two years ago, remarked to the Daily News, “I’m really happy and safe knowing I’m going to be in a place where people are really wise and understand the community.”

Open Love NY is a New York-based organization that provides a safe space for the polyamorous community, as well as coordinates educational and social events for its members geared towards “fostering a public climate in which all forms of consensual adult relationship choices are respected and honored.” Find out more at the Open Love NY website.

Update June 10: The building is almost fully rented. Also, Leon posts on Facebook, "Dozens of media outlets have tried to get us to agree to a reality show or documentary - all of which I've vetoed, because it's designed as a safe space to live, not for others' ridicule or sensationalism."