"All you need is loves: the truth about polyamory"

The Guardian —a major progressive daily paper based in the UK but circulated worldwide — has run feature stories on polyamory for many years, and today it's out with another. I presume this means the topic is a click bringer. The story bobbles a couple of definitions (can you spot them?) but it's basically on-target and quite positive. It gets my Show Your Parents tag.

More and more young people are abandoning monogamy in favour of open relationships. But is it really that easy to turn your back on jealousy? And what about all the admin?

Alex Sanson is nervous. She is hosting a dinner party this Friday, and wants it to go well, because her lovers are coming – all of them. “Cooking for one person you fancy is hard enough, but three of them is even more stressful!” says Sanson, who has brown hair, an open, friendly face and a bookish air.

...Dinner-party jitters aside, things are going swimmingly for Sanson, who works in marketing. “There’s so much joy in being poly,” she says. “It’s lovely not to burden one person with all your stuff. You just spread it all out.”

Polyamory, also known as consensual non-monogamy, seems to be growing in popularity among young people, though with no definitive figures it’s hard to know how much of this is a matter of increased visibility. It comes in many shapes and forms, from open relationships (where in layperson’s terms you “cheat” on your partner, but they are aware and do not mind, and do the same to you), to solo polyamory, where you identify as polyamorous, but are not currently in multiple relationships. But all those involved reject monogamy as stifling, or oppressive, or simply not to their taste.

“It’s not as complicated as people make it sound,” Sanson insists. If you are unsure whether polyamory might suit you, try this simple thought experiment: does the thought of your partner in the first flushes of romantic ardour with another person fill you with contentment, lust, indifference, or murderous rage? If it’s the last one, best to swerve polyamory. (There’s a term for the warm feeling polyamorous people experience when seeing their partners with someone else: compersion.)

...“The thing I’ve always disliked about monogamy and marriage,” Sanson adds, “is the idea of owning another person and them being your other half or somehow completing you, like you weren’t complete before you met them. What I love about polyamory is that I’m my own person and no one owns me. I don’t own any of you, either. We’re all free.”

Polyamory is having a cultural moment right now, with celebrities such as Will Smith and Jada Pinkett-Smith speaking about being non-monogamous, and the BBC drama Wanderlust depicting a middle-class couple as they open up their relationship.

...“Things are changing rapidly,” says Janet Hardy, the co-author of the polyamory handbook The Ethical Slut. “More people are getting the idea that it’s possible to be happy and healthy without being monogamous. What I’m seeing among young people is that they don’t have the same need to self-define by what they like to do in bed, or in relationships, like my generation did. Everything’s out on a big buffet, and they try a little of everything.”

Polyamorous people reject the end game of romantic monogamy, and disdain so-called “relationship escalators”.... Still, being polyamorous isn’t just a carefree romp. It requires you to unpick the messy yarn of human emotion, and that most familiar knot of all: jealousy. Perhaps the biggest myth of all about polyamorous people is that they don’t feel jealousy. “Jealousy is a part of human nature,” says 27-year-old William Jeffrey, a member of Sanson’s polycule. “You still feel it. But I’ve found with every jealousy I’ve ever had while being polyamorous, I’ve been able to trace the jealousy back to an insecurity about myself. When I figure out what the insecurity is, I can overcome it.”

...Is jealousy only ever the result of insecurity? “I’d say that’s too simplistic a view,” says Hardy. “I don’t think there’s one emotion you can call jealousy. I think jealousy is an umbrella we put over all of the emotions we find difficult that we want to quell by changing someone else’s behaviour.” In her introduction-to-polyamory workshops, Hardy asks participants to write a thank-you note to their jealousy. “It exists for a reason. Jealousy tries to protect you from something.”

...The polyamorous people I interview effortlessly manage packed schedules. Jeffrey, for instance, will meet once a week to play a Buffy the Vampire Slayer role-playing game with Scoins and the fourth member of their polycule, Laura Nevo. He also has a weekly date night with his live-in partner, as well as seeing Sanson and Nevo once a week.

While shows such as Wanderlust depict polyamory as a tumescent bonk-fest, in reality polyamorous people spend most of their time doing the deeply unsexy business of talking about their feelings. Sanson credits polyamory with giving her more emotional self-awareness. “Polyamory has allowed me to be more introspective, think about the motives behind what I’m doing, identify emotions more accurately and be explicit about how I’m feeling about things.”

...And monogamous people can learn from polyamory. Twenty-three-year-old Aliyah, who uses they/them pronouns, was polyamorous, but is currently in a monogamous relationship. They credit polyamory with giving them a healthier outlook on monogamy. “The way I was taught monogamy wasn’t healthy,” Aliyah says. “I’d have this constant paranoia of being cheated on.”

Polyamory made them better at monogamy. “I learned that monogamy doesn’t have to be as strict as we conceptualise it growing up,” they explain. “Before I felt that deep love should only be reserved for romantic connections. But being polyamorous taught me I have so much love for my friends, and that doesn’t have to be explored in a sexual context.”

As polyamory becomes more visible, it won’t be seen as such a tear in our social fabric, but as an ordinary and unremarkable thing. ...

Read the whole article (Sept. 15, 2018). It's also in today's print edition, under the title "The Rise and Rise of Polyamory," with a promo box at the top of the front page: 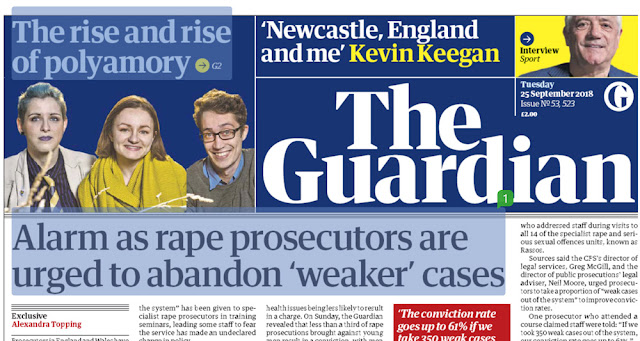 ● Here are three previous articles that appeared in the Guardian this year:

'What were her knickers like?': the truth about trying an open relationship (September 8).

My son is trans and polyamorous – here's what I learned from him (February 9).

‘Discovering my true sexual self’: why I embraced polyamory (January 20).

The definition they provide for solo poly is way off

And the other one is, I would argue that even "in layperson's terms" open couples do not "cheat" on each other, because they are not breaking an agreement.