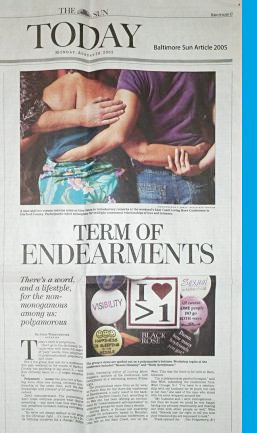 Shortly before the Loving More East conference was about to begin in Maryland last August (2005), its organizers faced a decision. The Baltimore Sun, one of the country's major newspapers, wanted to send a reporter and photographer. What to do?

In the interest of getting the word out about poly, the Loving More staff decided to take a chance. They said okay, with an agreement that the reporter and photographer would be escorted by a staff member at all times and would take photos and use names only with people's permission. All the attendees (I was one of them) were told about the newspaper folks present  who were, in fact, models of courtesy and professionalism. They left well before the conference was over.

Here is the article that resulted. And what a fine piece it is. Hats off to Robyn Trask and the rest of the organizers for making the right decision.


...The polyamorous came from as far away as Puerto Rico for the three-day conference at Ramblewood, a rustic resort in the backwoods of Harford County.... Loving More, a 20-year-old quarterly journal on polyamory based in Boulder, Colo., sponsors two national conferences a year, one on the East Coast, one on the West.

"I'm a polyamorous psychotherapist," said Nan Wise, attending the conference from West Orange, N.J. "I've been in a relationship with my husband for 30 years, but this is not him," she said of the man who stood with his arms wrapped around her.

"My husband and I were monogamous... but then we found we could be very happy having our primary relationship and sharing our lives with other people as well," Wise said. "Nobody has the right to tell you how your relationships are supposed to look."...

Read the whole article. (This is the text as reprinted at the Polyamorous Percolations site; the original article, with photo, is now walled off in the Baltimore Sun's paid archive.)