Conservative fear: "The Mainstreaming of Polyamory"

The American Conservative, and elsewhere 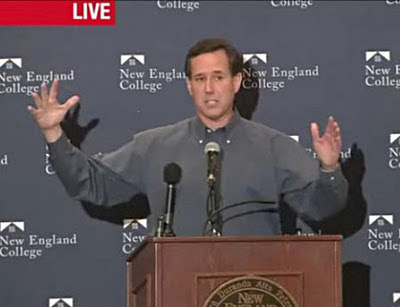 I guess we must be getting somewhere if we're in the presidential race. Here's Rick Santorum being interviewed by Glenn Beck on Fox News a while back:

GLENN: Polyamorous relationships. Polyamorous. That is the most incredible —

SANTORUM: I said it.


Santorum at a recent contentious event (above):

So if you're not happy unless you're married to five other people, is that OK? Reason says that if you think it's okay for two, then you have to differentiate for me why it's not okay for three.


Michele Bachmann is out of the race, but a couple months ago her Iowa campaign co-chair, Tamara Scott, had this to say:

Scott said polyamorous relationships exist in Boston and Illinois, two places that recognize gay unions. She then suggested that that gay marriage would lead to people marrying objects, such as “when a woman marries the Eiffel Tower.”


We're usually discussed only in this secondary role, as part of the magical steam pit at the bottom of the lubricated gay-marriage slide where people marry turtles, ducks, and France's national phallic symbol.

But some conservatives fear us directly for who we really are. In a paleoconservative magazine online:

The mainstreaming of polyamory

...Andrew Sullivan today linked to a personal account of a young man who came to call himself a polyamorist after a girl he met invited him to fly to her home to have sex with her, with her husband’s consent. What’s interesting about this is how the man’s conscience kept trying to stop him. For example:

“Is your husband really ok with this?”

“No!” I quickly exclaimed.

The whole thing just felt odd. I tried to put my finger on it, but I couldn’t. Eventually I concluded that my feelings of weirdness grew purely from the fact that she was married and what that word meant to me. It didn’t make a whole lot of sense to expect someone else to conform to my notion of what a marriage was, so my reticence was not from any concern that could be considered rational. And as someone who has made a career out of telling people that emotional responses should not take precedence over rational ones (and as someone who likes sex with attractive, super nerdy women), it did not take Christina long twisting my rubber arm until I agreed.

At least once more, when confronted by her husband, he balked. It felt wrong. But the husband talked about his girlfriend, and how cool polyamory was, and, well, that was that. And now:

I’ve learned a lot from Christina and Chris, but chief among them is that I am polyamorous and would have been much sooner if not for a bunch of wonky societal myths. And so I write blog posts like this, because that’s why we come out. We come out to normalize something we think are awesome in order to dispel those myths.

We’re going to be seeing a lot of this, I bet. People who have nonjudgmental attitudes about sex deciding that the only thing keeping them from violating taboos is fear. And when that is conquered…

...Scalia has shown how and why, when gay marriage comes before the Supreme Court, a majority of justices will rule it to be a constitutional right. How could they not, given Lawrence [v. Texas]? And having so ruled, what rational basis is there to deny polyamorous, er, entities legal recognition? By then, though, it may not even be controversial, given the progressive liberalization of attitudes toward sex.

Some historical perspective: The argument that gay marriage is a slippery slope to polygamous marriage goes back at least to the late 1990s and hasn't evolved since, even with the arrival and normalization of gay marriage during this time.1

From about 2003 to 2006, some major organs of the American right tried to whip up polyamory as the next great threat against which they could defend American civilization. A driver in this was Stanley Kurtz, an intellectual for top conservative think tanks, who splashed the topic on the cover of the Weekly Standard, in the National Review, and elsewhere. It didn't take. Anti-poly hysteria gained no traction beyond the conservative movement's immediate followers, so leaders dropped it and went on to other things. The 2003–06 effort may have served mainly to make more of the public aware that happy, successful poly households even exist — which was less known at the time, and which is a key part of our own nefarious agenda.

I'm still waiting for a real backlash, and it keeps not coming. Meanwhile we've made good use of this long window of opportunity to define ourselves to the public on our own terms. More on this: Winning the Race to Define Ourselves... So Far.

UPDATE THURSDAY: More politics! From The Hill: “In an explosive interview, Newt Gingrich’s second wife, Marianne Gingrich, says the former House Speaker wanted an 'open marriage,' but that she refused.

“Her revelation comes as the presidential contender is closing in on front-runner Mitt Romney ahead of South Carolina's GOP primary.... Marianne Gingrich says in the interview that her husband wanted an open marriage so that he could remain married but continue a romantic involvement with a congressional aide who eventually became his third wife, Callista Gingrich.” Read on.

Same-sex marriage is simple and, from a structural point of view, not legally innovative. That is, it maps exactly onto the vast legal regime that's already well developed for straight marriage. (This has been true ever since courts started regarding men and women as equal parties in marriage.) By contrast, state recognition and regulation of poly relationships would require many new legal structures, precedents, and policies.

And because there are many different basic kinds of poly relationships, compared to only one basic kind of couple marriage, each would need its own legal regime — and we know how good the state is at sorting out complicated personal realities.

Moreover, unlike couple marriages, poly relationships can change from one kind to another kind while continuing to exist. An equilateral triad can become a vee or vice versa, or something in between. The flexibility to adapt — to "let your relationships be what they are" — is a core value in the poly circles I know. How would the state keep up with your particular situation?

I've also heard it argued that opportunities would abound for unscrupulous people to game the system in ways that the law couldn't easily address: for people to pretend that their poly relationship is a different kind than it really is, or that they're in poly relationships when they're not. For instance, could gang members group-marry to gain immunity from each other's testimony?

In polyfolks' discussions that I've been in, the talk comes around instead to business-partnership models for poly households, such as subchapter-S corporations or family LLCs or LLPs. These are already well developed to handle a wide variety of contractual agreements between any number of people. (Though they have to be maintained properly, with formal annual meetings and such, or they lose their validity.)

Looking further ahead: Good law follows reality rather than precedes it. Fifty or 100 years from now when poly households are commonplace and their issues are well understood, I'm sure an appropriate body of law will have grown up to handle the issues that arise. At least that's how it works when civil society is allowed to go about its business, free of religious or ideological compulsion.

That is, the state wouldn't jail you for it *or* give you a marriage certificate for it. Those are two different things. Which conservatives tend to confuse, with their brain wiring that naturally confuses what's allowed with what's required.

The Sister Wives family is suing Utah right now so they won't be criminals liable for jail, and for that they are arguing from Lawrence v. Texas, which confirmed the right to choose one's intimate relationships.

Everything in it's own time...

>There are sects of polyamory

We have sects now???

First, I find it interesting how advocates for same-sex marriage rights have so quickly "pulled up the drawbridge" whenever polyamory is brought up. So our biggest obstacle may not be the Religious Right, but our supposed allies.

Second, let's consider what it took for same-sex marriage to even be conceivable. Originally marriage was not a very egalitarian arrangement; the husband was in charge, and that's that. When feminists rightly critiqued this, and put forward a new partnership model, that opened the door for being able to see marriage in a "gender-neutral" manner -- and thereby inclusive of same-gender couples. By the same token, we would have to address certain questions about the structure of marital/relationship agreements before moving on to seeing how multi-partner agreements could be similarly recognized.

> First, I find it interesting how advocates for same-sex
> marriage rights have so quickly "pulled up the drawbridge"
> whenever polyamory is brought up.

There's plenty of potential reasons for this. They may not want to confuse their message with another public fight for recognition. They may also simply personally not agree with polyamoury - many folks don't.

However, it's not really surprising. Some of the folks who were at the forefront of the race-related civil rights movement turned out to be strongly anti-gay.

Suggested reading - Free Speech For Me But Not For Thee by Nat Hentoff.

More news from the right: Newt wanted an open marriage.

I do not believe that I wish to be part of anybody's mainstream.

Come now Natja, "everybody knows" polyamory is all about the sects! :P