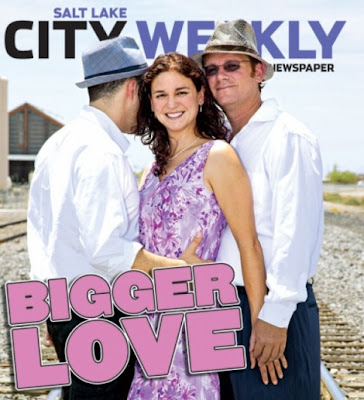 Salt Lake City is the capital of the Mormon Church (LDS), so it's no surprise that members of the Utah Polyamory Society say they're always having to explain that no, they're not about patriarchal religious polygamy. They even have to explain this at their annual Pride Day booth.

This week's City Weekly, Salt Lake City's alternative newspaper, presents a long cover story about polyamory and the UPS that ought to make their job a little easier from now on. The article was written by one of the society's own members.

Bigger Love: For Utah’s polyamorists, one romantic partner is not enough.

The house looks typical enough — an attractive split-level in an established Salt Lake County neighborhood — but the family living here is far from conventional. While Utahns are familiar with polygamy, another form of “non-monogamy” is both more commonly practiced and lesser known. We’re about to visit the household of the Smiths/Joneses (not their real names) — two wives, two kids and two husbands....

...Utah’s polyamorists come in all sexual orientations — straight, same-sex, bisexual — and their sexual practices span the spectrum: one-on-one or “vanilla” (probably the majority), group, kink. The Smiths/Joneses form what’s known in the poly community as a “quad” — two couples with each individual able to share some sexual intimacy with any of the others....

The Smith/Jones quad is also “open,” meaning partners can have additional outside lovers, if desired. Other polyamorists practice “polyfidelity,” where sexual intimacy occurs exclusively within the group. Others may be “fluid bonded” — using condoms or other safer sex practices [only] with outsiders.

...How did they vault the cultural fence and become polyamorists? Celine reports, “I was raised pagan, so being strange was never a big deal, but my big problem when I was young was that I fell in love with all my friends.”

...One reason they formed an extended household was simple practicality and green economics. Liz explains, “My ideal is living in a communal situation. It’s wasteful for two people to live in an isolated box and try to raise children.”... Joe adds, “We now have more buying power.”

...“We all have different things we specialize in and different ways of doing things we all respect,” Celine says, and points to a set of 20 cards that make up a homemade mobile hanging from the ceiling, each card containing one of the jointly drafted family values and their child-rearing philosophy. She explains that “in parenting situations, we defer to the birth parent for the most part, but anyone has input and can take control of a situation with a child.”

...The Smiths/Joneses drafted documents with an attorney for the transfer of property and guardianship in the event of a death, since they want the children to stay in the home they’ve created rather than be placed with extended family. They report, however, that it was tough to find willing legal professionals.

One who does assist society’s fringe types is Midvale attorney Andrew McCullough, who believes polyamorists enjoy broad protections stemming from the 2003 Supreme Court decision Lawrence v. Texas. “It basically tells government to stay out of our bedrooms,” says McCullough, who opines that if kids aren’t subjected to behavior any more salacious than what they’d see in the typical home, “it shouldn’t matter how many ‘parents’ they have.”

For peer support, the Smiths/Joneses are involved with the Utah Polyamory Society, which maintains a Listserv at groups.yahoo.com/group/UtahPolyamorySociety/ for more than 500 subscribers. The society holds meetings twice a month and occasional socials for 10 to 100 attendees, geared to Utahns seeking encouragement and advice in creating successful polyamorous unions.

...My own polyamorous journey began seven years ago....

...Vanessa is open about her bisexuality, but Anna is leery of too much exposure and public displays of affection with others. She’s not shy, however, about listing the benefits she’s accrued on her polyamorous journey: “Coming into who I really am while breaking out of what my parents and my bishop thought I should be, and doing what moves me, has been awesome. I love loving how I love. I love being how I am. I think I’m one of the luckiest women in the world, and I’m surrounded by intelligent, spiritual, loving people.”

All are hopeful that society will continue to become more accepting of unconventional lifestyles. Jake philosophizes, “I think the day will come when everybody will be living their dreams full-on, all the time, and without reservation.”...


Read the whole article (June 1, 2011). It profiles a number of other people and their experiences, including an awful one. One sidebar lists "resources for exploring the polyamory path" (including Polyamory in the News!), and another discusses the anthropological basis of poly, drawing on Sex at Dawn.

P. S: Why do so many gentiles still think of polygamy when they think of Mormonism, more than 120 years after the LDS church left polygamy behind? In 1890 the church officially renounced its doctrine that a Mormon man needs three wives to please God and get top treatment in the afterlife, and outlawed the practice, in what amounted to a deal to get the federal government to accept Utah as a state.

Part of the reason the church hasn't been able to shake the polygamy tag is that it abandoned polygamy only in this life. Three wives remain the expectation for good Mormon men in the afterlife. Even though the church doesn't publicize this, indications of it may show.

Then there are the breakaway Mormon sects, with a few tens of thousands of followers, who hold to the original doctrine of "celestial marriage." They claim, with some justification, that they're the real Mormons and the mainstream LDS church is the breakaway, because its leaders abandoned God's revelation for secular gain.

I think it's also been difficult for them to shake because of how strange it was for a modern-day Christian church to profess a strong belief in and practice of polygamy. It sticks out in the history books because of its peculiarity.

People all over the country still think of Mormon polygamy first! My triad on the east coast has been asked whether we're Mormon...

perhaps that's true, same story as I know here in our place.

I still believe that overall, Mormons might be hurting the polyamorous community to a great deal. Just think about Canada where poly is illegal pretty much only because of the Mormons and other religious groups/sects in which patriarchal polygamy was the desired situation.

It simply sticks too much in pulic knowledge. I suppose what we need is a lot of polygamists that are e.g. believing Christians or Atheists. Because that's like, main-stream society. We need to show that polyamory has nothing to do with religion, but is a practice of its own.

Let's see if polyamorous felationships still work when all of you are in your 80s dieing. Who will receive the lions share after you die. Will love triumph and will those you leave behind stay together when you're gone? It's possible but the probability is slim. Good luck in your relationships; you'll need it.