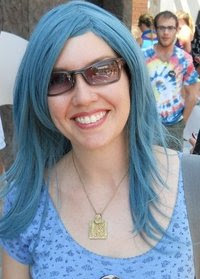 You may recognize Kendra Holliday, also known as The Beautiful Kind, as the kink/poly/fetish writer in St. Louis who lost her job at a nonprofit and faces a custody challenge from her ex because she accidentally outed herself in a Twitter slipup.

Having been outed will'er-nill'er, she picked up the ball and ran with it. On her substantial, sex-positive website The Beautiful Kind, she now says she

writes for SexIs magazine, does video reviews for EdenFantasys, and is the author of The Book of Goddess: Elevating Your Desirability to Mythic Proportions. She is co-founder of Sex Positive St. Louis and is an Alternative Lifestyle Advisor and Gynecological Teaching Associate for Washington University School of Medicine. Featured countless times in the local alternative weekly The Riverfront Times and winner of 2011 Web Award for Best Sex Blog, she also has a monthly advice column in The St. Louis Sinner.


She recently posted a fine piece that has just been picked up by the major feminist site BlogHer. Says poly activist Anita Wagner, "She elegantly expresses a perspective that practically guarantees a successful, happy polyamorous life. Read on!"

My partner and I have the perfect relationship. For us, anyway. We’ve been together for four years. We’re not married, but are in a long-term relationship. We do not live together, preferring to keep our households, finances, and families separate. Autonomy suits us well.

To top it all off, we are polyamorous; meaning, our relationship is open, allowing us to experience intimate relationships with other people, such as dating, loving, and exploring sexually. Sometimes we do it together; other times, separately.

We don’t fight. We have amazing chemistry and enjoy an incredibly satisfying sex life. We can’t get enough of each other. Our relationship is based on mutual worship and respect, and our number one rule when it comes to dating other people is they need to respect both of us.

Before I knew of polyamory, I thought I was defective and unfit to be in a relationship. After years of disappointing my partners, a series of men who enjoyed playing with the girlfriends I brought home but freaked at the mere mention of another “sausage in the room,” I resigned myself to remaining single.

Then I met Matthew, who was recently divorced from his wife of ten years. What had started as a happy, traditional monogamous union with Matthew left his wife stifled and miserable. Determined not to repeat those same mistakes again, he took a leap and partnered with me, a renegade female who was in charge of her sexuality and knew what she wanted....

Sex with him can be so fierce and fantastic. He’s larger than life, outweighing me by 180 lbs., a Beast to my Beauty. I get a contact high from his testosterone just being in the same room as him.

How could I possibly keep all that man to myself?

Ironically, he is the first man I feel I could be monogamous with; after all, our kinks and libido match perfectly and we’re both so sexually creative.

Honestly, just having the permission to sleep with other people — the FREEDOM — is enough to keep me content for months at a time....

My friend says, “Love is like an ocean, not a bathtub. One person doesn’t need to get out in order for another to get in.”...

Here’s a little secret: polyamorous relationships often include sex (some joke that is should be called polyfuckery), but not always. I’ve had several people contact me describing their unusual situation: for example, the wife’s best friend has been living with them for over five years. There’s no sex involved, but they do everything together, they consider her part of the family, and they even joke about her being “his other wife.” They ask me, is that poly?

I say yes. The poly groups I’ve polled agree with me....

...Before you dive in, however, please take note: Regardless of the relationship style, the following traits are desirable for ANY healthy relationship: agreeability, confidence, conscientiousness, and, the trickiest one -- being emotionally stable.

In order to be emotionally stable, you need to embrace honesty and love yourself and others for who they are....

That is how my partner and I have chosen to do things, and it is leading the two of us to self-actualization and full integration. I don’t think there’s anything more liberating than being fully integrated.

...As for our friends and lovers, our love is fluid. They come in town, we love them for the weekend, and then we release them back into the ocean like a message in a bottle. The respect and acceptance is there, and so is the glorious freedom.