Some Next Generation voices 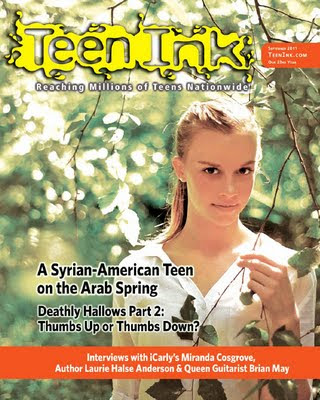 A student speaks out for polyamory on the website of the online and print magazine Teen Ink ("reaching millions of teens nationwide"):

In my opinion, I have too many friends that are pointlessly heartbroken.

...Most people involved in polyamorous lifestyles don't believe in the same standards of commitment that are idealized by society. Instead, honesty and trust are key factors, which lets each individual experience complete romantic, emotional, and sexual freedom.

I believe in the idea of polyamory, because to me it's completely logical. Think about it for a second. We, as animals, are not programmed to choose one mate and spend the rest of our existence with them, faithfully. It's not realistic. I don't believe you should have to subtract someone you love from your life instead of adding someone to it.

Based on this, I feel that exclusively monogamous relationships are impractical and against nature. You don't have the right to own or rule over another person's life, nor choose their decisions for them.

Sadly, because monogamy has been so normalized in our society, most people are conflicted and critical of the idea of loving more than one person at once.

...I honestly believe the world would be more productive if polyamory and monogamy switched roles. There would be no burden of numerous Twilight books....

Love is not something that should be lost for no reason. Love is not a pie; the more slices there are does not mean each slice contains less.

...It is one of my greatest hopes that polyamory will eventually be accepted in society, and not looked down upon and avoided because of misinformation.

When I turned eighteen, I began hearing a term I'd never heard before: polyamory. I wasn't sure if it was because I moved to the west coast or because it was catching on in society as quickly as bisexuality did, but either way it had me fascinated. How could it possibly work? Why didn't partners get jealous? Was it an appropriate lifestyle choice, or just a glorified excuse for cheating?

I've run into several polyamorous couples now, and they've all left me with a different opinion. For one couple, it worked perfectly. For another, it was the husband's way of getting away with sleeping with other women. For me, it was all far too confusing to figure out.

To clarify, polyamory is not strictly sexual, a common misconception. Those people are called swingers, not polyamorous. Also, having a girlfriend on the side is not being polyamorous. In a relationship involving polyamory, all partners know about each other, as the relationship is a romantic one. The technical term for sleeping with other people behind your partner's back is "cheating."

...Couples I've seen discuss everything together, from the wife's new boyfriend to the husband's new girlfriend. One couple actually both dated the new girlfriend, and had a strange sort of triangle going on. It worked for them, so cool.

...Could you ever partake in a polyamorous relationship? Do you think it's morally wrong to try to love two people at once? If your significant other were to tell you they wanted to try polyamory, how would you respond?...


Whole article (June 24, 2011), with many comments. Enough other readers voted up this and her many other essays to win her a $5,000 scholarship prize from the site's sponsor, CollegeNET, "a privately held company providing web-based on-demand technologies to colleges, universities, and non-profits."

● See too this article on Loving More's blogsite: The Influx of Young People Identifying as Polyamorous (Jan. 22, 2011), and read the many comments.

● Bitsy, a grad student and a member of the Polyamory Leadership Network, has put up a list of TNG (The Next Generation) poly groups. She intends to keep the list up to date permanently if you send her additions, changes, or corrections; mail to bitsy AT openlypoly DOT net.

Now, saving the best for last: at Boston University, Bitsy wrote an article for an underground orientation booklet that incoming freshmen received:

...The idea of being open and honest about having multiple partners strikes people as crazy.

Perhaps it is, but it's the best sort of crazy: the kind that allows many people to have happier lives.

....When I entered my first serious relationship, I told my partner-to-be that I didn't want monogamy. I had active crushes on other people and I knew these feelings weren't about to go away just because I was being lovey with one person.... We've now been dating for nearly ten years. In that time I've learned how many pitfalls forging your own style of relationship can have, found a name for what I do — polyamory — dated a few other people, and been incredibly satisfied with the paths my relationships have taken.

In addition to my long-standing partner, I have another whom I've been dating for about four years. I have lived together with both of them in the same apartment....

Let me add a warning: getting to a place where my relationship worked was difficult and painful.... One of the things polyamory teaches you is to be comfortable with emotional pain, knowing you'll move through it, knowing you have a larger goal. Moving through emotional pain allows you to grow into a better person, to be more in touch with yourself, and better able to deal with life's curveballs. You learn to communicate clearly, directly, and proactively, a skill that's applicable not just to your personal life but to academic and professional pursuits. You'll find that your emotions surprise you: things you think would be problems often aren't, and things that you'd never considered turn out to bother you tremendously....

Three years ago, poly activist Diana Adams (another member of the PLN) declared at a Loving More conference, "This is my poly dream: that every college student in America will know the word polyamory and what it means within five years."

With two years to go, it actually seems to be happening to some extent — more than I remember expecting at the time. Any ideas on how to boost the pace toward Diana's deadline? And to ensure that more of what gets out there gets it right?

Labels: college, millennials, The Next Generation

The only suggestion that works is for all of us who are poly and in college to spread the word. Just like the LGBT community, we need to be out, loud, and proud.

Does anyone here know how to send literature -- anything from nicely printed trifold flyers to web articles -- to college health centers and/or LGBT centers, for them to consider making available to students? Does someone have a mailing list? Or know where to find it?

Alan, I haven't a clue-but I am involved in a the LGBT club at the college I attend in Alaska-and if someone does figure that out and/or want to send fliers-I'd be VERY interested in putting them out in our school!

LGBT Centers (both city ones and college ones) often tend to have a spot for brochures for local groups. Also many have libraries. I've been looking for inexpensive copies of polyamory-related books to donate to ours, for example.

The totally fantastic sex ed site Scarleteen has a poll up on their main page right now about "what kind of romantic/sexual relationship would you prefer?" and the spectrum of options include "a fairly open model," "a completely open model," "a polyamorous model," and "a don't ask don't tell model," among others. I thought it was super refreshing to see a site for young adults not only treating non-monogamy as a perfectly normal option, but also even going so far as to differentiate between various kinds of non-monogamy.

I have been working on a blog site about the flavor of poly that I am living, which is close to polygyny (without the Mormonism, and with some bisexuality thrown in). If anyone is interested in checking it out and would like to offer some feedback, I would welcome it. www.polygrrl.com

As a 20 year old polyamorous gal, I'm glad to see more younger folks out there talking about these things.

I live in the SF bay area, and it seems like there's a pretty significant poly community here, but also seems to be made up of a mostly much older crowd.

This is a positive thing because there are all these experienced people to learn from, but I would love to see a younger poly community emerge- I think that a lot of college-age folks would feel more comfortable exploring the idea of non-monogamy for the first time surrounded by their peers.

I've also been blogging a bit about my poly experience, so here's another "Next Generation Voice"

I recently had my sister stay with me for a bit; I'm 30 and she just turned 19. I started to explain that I was in a relationship with both my husband, who she knew, and the other guy we were moving in with, who she had just met. I started saying "It's called a polyamorous relationship..." and she interrupted me to say "I know what that is, and it's okay. It's not like I'm going to think you're weird or anything."

I was blown away... if only I had known what polyamory was when I was her age. *sigh* It's so terrific that the younger generation is learning about these things, the choices that they have for who they want to be.

Heh, I have a blog, too, of course. http://generallywell-rounded.blogspot.com/