From cheating to poly?

Conventional wisdom in the poly world is that a couple who try to transition from cheating and betrayal to honest polyamory usually fail... at least with each other. Poly depends crucially on communication, respect, and trust. After cheating, trust is majorly broken. 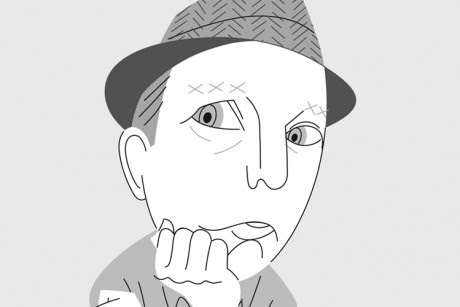 At Salon, advice columnist Cary Tennis (sketch at right) has snarked at the idea of poly in past years but in response to a new letter now expresses honest amazement that some people apparently make it work — though not necessarily the troubled letter writer. He ends with a plea for members of the poly community to weigh in here. To comment you have to register with Salon (I had trouble with it), but I urge you to go have your say, and represent us well. The comments so far are poorly informed.

My lover’s husband shares his wife with me

I'm even living in their house now, with their two kids. But lately her passion has cooled toward me.

I made a choice that I thought would make me deliriously, irrevocably happy, and it hasn’t. I fell in love with my colleague, J. We began working together two Augusts ago, then became closer last January; by February I was writing to myself warning about falling in love with this married and unavailable friend of mine. I did fall in love with her, deeply. We spent most of our waking hours this summer together, and with her young sons, going to the beach, dog sitting, swimming and watching movies....

After the first time we were intimate, she was remorseful; by the next day, we were nuts about when we’d be able to do it again. We were on-and-off with the intimacy all summer: She did want to stop because of her marriage and because she felt our friendship wasn’t in its best state with her worries about infidelity. The intimacy was and is wonderful, by the way. “It’s the closest you can get to someone, isn’t it?” she said, as I was about to joke, “Can I just crawl inside your skin?”

...In the end, J’s husband found an instant messaging chat between J and me in which we were discussing our deep love for each other and our affair. Miraculously, it seemed to us, he agreed to an open marriage in which J and I could be intimate. Miraculously again, he agreed that I should move in. I finally have the time I crave with the woman I love and the two little boys who have become so precious to me.

We have avoided many things people might predict will happen in such a situation, though I will speak only for myself. I do not feel jealous of J’s husband; I do not feel like an outsider in her family. What I have not been able to master, though, is a feeling of disappointment that her passion for me has seemed to fade so quickly. I know that her love is deep and abiding. All of her actions are caring and thoughtful. But we never seem to have sex and her proclamations of love have already become run-of-the-mill “love you’s.” She even texted her husband and me the same [rather bland] message yesterday.

...My internal debate the past week has been whether I love being a part of a deeply caring relationship and wonderful family enough to deal with a lack of passion. Am I going to end up effectually as a live-in best friend who snuggles well? Am I looking at it all wrong? How do I ask my beloved for more passion?

I want to make clear, for readers, that from your email name I am assuming you are a woman.

But so many things remain unanswered! You do not seem to recognize how unusual this sounds. Perhaps for people in the polyamory community it is not so usual at all. Perhaps we will hear from some. Perhaps this is more common than I am aware.

One thing I find missing is the husband. He seems a distant, spectral figure. Who is he? Who is this amazing man who has invited his wife’s lover into the house?...

...Your letter contains few details about the decision-making process that led to this arrangement. It would be nice to know on what terms you are living there. Are you paying rent? Are you a guest? Is this considered permanent, or an experiment? Have you moved your furniture into the house? Do you maintain another residence, somewhere to repair to if this should fall apart or explode? And how old are the children, and how do they regard you?

It’s all quite intriguing. As I say, I rarely write back to letter writers asking for clarification or amplification.

...So, it’s all just fascinating. As I have often done lately, I make a special appeal to readers who may have had similar arrangements to offer their experience and possible suggestions about the emotional dynamics of such a situation.

I commend you for venturing forth in this unusual way, and that I hope this arrangement can bring happiness to all concerned.

Salon does make it difficult to post comments. I've given up. D:

If you have trouble posting a comment to the Salon article, you might mail it directly to Tennis at

and ask him to post it because you couldn't. That's what I did.