"From a fringe scene to a veritable subculture" 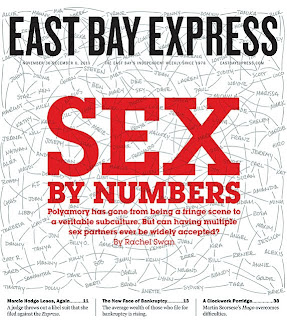 Among alternative newspapers, the East Bay Express in Oakland, California, was a renowned oldie even back when I was mixed up with the Association of Alternative Newsweeklies (as it was then called) a generation ago.

This week's issue offers the eye-catching cover at right, leading off a 3,800-word article on the state of polyamory in an area where it has been known and practiced long enough that there's nothing new about it. Excerpts:

Polyamory has gone from being a fringe scene to a veritable subculture. But can having multiple partners ever be widely accepted?

Jessica, John, and Kate (not their real names) sat together at Cafe Van Kleef recently, looking more like three long-time friends than three people involved in a love triangle — or, as they'd put it, a love polygonal. Jessica had an arm casually draped around John, who leaned against her contentedly.... About a year into their relationship, Kate entered the picture.... Both were warm and loquacious, identified as 'queer,' and saw themselves as part of the Bay Area's sexual underground.... Kate marched straight up to Jessica. "Full disclosure," she said. "I'm only here to get in your boyfriend's pants."

...Since reading Dossie Easton's polyamory primer The Ethical Slut in college, Jessica decided that she wanted to impose a cooperative, communal model on her own romantic life, without being a total freak. Although her current relationship with John is her first real foray into polyamory, Jessica said it's something she always wanted.

...And Jessica's not alone. Over the past decade, polyamory has gone from being a fringe trend to a bona fide scene to a relationship model that's widespread enough to almost be socially acceptable. The scene has its own canon, which includes texts like The Ethical Slut and Christopher Ryan's Sex at Dawn.... Some would argue that the proliferation of social networks and dating sites — namely, Facebook and OKCupid — has turned us into a more open culture. The Bay Area in particular, with its long history of free love, its vast network of Burning Man enthusiasts, and its overall progressive ethos, is a natural hotbed for the alternative sex scene. It's a place where avid polyamorists can bring just about anyone into their fold.

Sort of. It turns out that, no matter how successful they've been at negotiating relationships, many polyamorists still have one foot in the closet. And in a world where monogamy is not only well-entrenched but vital to the workings of a property-based society, their scene may always remain marginal. That realization has caused many "ethical sluts" to treat open relationships not only as a lifestyle but as a social cause....

...John would venture even farther, arguing that open relationships are actually a more natural state than marriage and the nuclear family. "Okay, like 10 percent of people in this society say they're gay, right? I think about the same amount of people are naturally born monogamous."...

...John has a fairly sunny view of Kinky Salon, at least in terms of its ability to attract a wide and representative swath of the polyamory subculture. Yes, more than half of the folks who attend are white, college-educated people in their thirties, he said. But they constitute the scene's demographic majority. "It's definitely a have-your-life-together-but-are-still-having-tons-of-fun kind of crowd," he said, adding that in general, the racial makeup pretty much mirrors that of San Francisco.

Jessica's read is a little more cynical. She's been to two Mission Control parties and says they definitely stand out in a scene that's become larger and more diffuse — in the last decade, so-called "pansexual" and "alternative adult" clubs have cropped up all over San Francisco, and many of them are a little less discriminating, in terms of the crowds they draw. All the same, she finds the crowd to be pretty specific, not so much in an elitist way as in an isolationist way. And generally, it's dominated by nerds. "You know, Burning Man people, Renn Faire people, people who are really costumed," she said. "They're older. They're not really people I'm interested in fucking."

...Ned Mayhem, a PhD student in the sciences and second-generation polyamorist (his father also has an open marriage), would agree with that assessment.... Mayhem said that a lot of the people he meets in the so-called "sexual underground" are nerds in other parts of their lives — grad students, engineers, costume-party types, bookworms, live-action role players. They tend to be open-minded and well-educated, but always a little to the left of what mainstream society would consider "sexy."

Perhaps that explains why polyamory has formed such a flourishing, albeit circumscribed subculture. It's a scene where square pegs and misfits can reinvent themselves as Lotharios, where a self-described "socially well-adjusted" person like Jessica feels like an outlier.

Certainly, not all polyamorists attend sex parties or engage in kink — many who subscribe to the "open relationship" philosophy still consider themselves fairly vanilla. But the fact that San Francisco has such a vast and well-networked sexual underground benefits them, too, since it makes for a more tolerant environment. It also shows that the alt-sex scene, and by extension, the polyamory scene, isn't just a countercultural fluke....

...And the truth is that polyamorous relationships are hard....

...[John] explained that even though most people are theoretically born nonmonogamous, few people can actually practice nonmonogamy in a healthy, fair, fully communicative way. We're so habituated to think of romance in terms of competition and scarcity that it becomes nearly impossible to break away from that model. John said one would think that his and Jessica's pool of potential partners is a lot bigger than that of the average person, but it's actually more limited.

In the end, it's hard to say which model is better, given our social circumstances. "I think monogamy has certain pressures and discontents that complicate relationships," [Dan] Savage wrote. "And I think polyamory does, too. You get to pick your poison."

It's possible to make a serious mess of a polyamorous relationship, be an unthinking, uncaring jerk, and alienate the people around you. Then again, it's also possible to create the kind of romance that John and Jessica apparently have, in which everything seems beautiful and clean.

The language choices like "clean" for John & Jessica's relationship and "without being a total freak" for Jessica's "well-adjusted" approach to nonmonogamy suggest attitudes that made me pretty uncomfortable, and there's definitely an undercurrent of "let's learn about those *other* people", but the voices of the interviewees seem to come through as speaking clearly and insightfully to the nature of ethical nonmonogamy. So, that's pretty great. It seems that public discussions of the ethics of consent, respect, and communication are on a trajectory that could take us in beautiful directions (and by "us", I don't just mean folks who practice polyamory). Thanks for posting this; having followed your blog for a year or two now, I've loved watching the growing space for polyamorous voices in mass communication.