In the thick of the most important event of this year, polyamory emerges naturally for a certain fraction of the participants.

Monogamy, polyamory and preoccupations with the future of modern love. 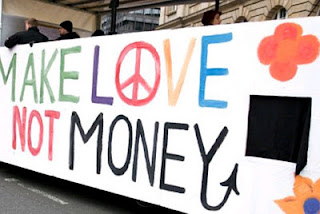 ...According to 2010 Pew research, 50 percent of young people think that marriage is becoming obsolete. As the Occupy Wall Street movement represents the change people want to see in our society, what kind of change do protesters want to see in relationships? What is the future of dating, or even marriage, according to the protesters? Here is a glance at sex, dating and modern relationships at Occupy Wall Street.

Part One: Poly at Zuccotti

Caitlin, Robert, Yelle, Leandra, Alex and Kyle slept together in the same tent at Zuccotti Park. “Everyone is romantically, intimately and sexually involved,” says Robert. They are a polyamorous family (a relationship style meaning, literally, “many loves”). The group share food, finances and plans post-protest: one pair are traveling to Portugal, others will be tree-sitting in Oregon.

After that, the group members started saying “I love you” to each other. There was more of a bond. “There are tender moments," says Caitlin. "Like taking care of someone who's sick.” And no two relationships in the group are the same, “I relate differently to the 18-year-old who is new to protest culture than to members who are older and more experienced than me," she says. "You need the one-on-one, or that sense of family gets lost."

While polyamory might not be the norm, the group says relationships are changing for their generation. “Traditional courtship rituals are not financially possible — for people here and for our generation as a whole," says Robert. "I’ve had more girlfriends in the past who I moved in with early on because it was the only thing that was economically feasible."

...And for them, it works. “We can go days without talking to many other people, because we have so much of what we need right here!”

Sebastian and Catherine met in L.A.... The couple describe the moment they decided to camp out at Occupy as amorous. “How many people can turn to their partners and say, 'You know, I think we should go live in a park for the good of humanity, for months on end'? The entire thing is a wholly romantic exercise,” says Sebastian.

They have a fairly traditional marriage: Catherine and Sebastian are monogamous; they want children. But their model for that is different than their parents'.... [Catherine] hopes that the future of relationships includes a more communal style of living. “Nuclear families can be so isolating,” she says. Sebastian points out that even if you believe in nuclear families, that model isn't looking sustainable....

Living with other couples can provide the nonsexual benefits of polyamory — you can have a support system while remaining monogamous, and passionately so....


Read the whole article (Nov. 18, 2011). It was written before November 15th, when New York authorities staged a pre-dawn raid, arrested 200 occupiers, and bulldozed the encampment.

Added Dec. 16: A reporter for the San Francisco Bay Guardian who was embedded at Occupy San Francisco and Occupy Oakland reflects on the non-monogamy movement and what it could mean for the 99 percent: Revolutionary bedfellows: What Occupy has in common with the sex-positive movement (Dec. 16, 2011).

Labels: leftist/anarchist, millennials, The Next Generation

> According to 2010 Pew research, 50 percent of young people think
> that marriage is becoming obsolete.

It continues to annoy me that many in the poly community continue to push that poly = not marrying. Many of us would prefer to see the concept of marriage extended to include more than one person.

And in the absence of that near future possibility, it is important for Poly people to avoid entering a State system that continues to marginalise our relationships. Talk is cheap, it is no good entering into the system and THEN bemoaning the lack of equality in our relationships. If we want to be taken seriously as an alternative relationship choice we have to prove that we can have strong relationships and families without the back out of the conventional State system.
On a personal note, a lot of people advocating for acceptance of marriage are married themselves and therefore often talk from a position of privilege, most of them do not know or care about the injustice of the inequality of their relationships in their non marital partner. Being radical comes with a price, what should that price be? Less marital benefits associated with marriage or the health, strength and well being of 'our' Poly relationships!

The fact that younger people do not value marriage as much as previous generations does not mean that they also place a lower value on exclusivity. Monogamous cohabitation has been on a steep rise for years, far out-pacing polyamorous cohabitation, which is comparatively very fringe. People who are delaying or rebuking marriage are still enjoying long-term monogamous relationships. The poly community should really stop using the declining marriage rate as a means to argue that the poly lifestyle is becoming more accepted.

Also, I don't think the poly community is well-served by profiles of gadabouts casually entering into polyamorous relationship for the sake of experimentation. They aren't building a stable, loving family unit that happens to be polyamorous--they're just fucking around as it suits them because it's better than getting a job or trying to form committed bonds with their partners.

Ironically, I think the TLC show "Sister Wives" has done a lot to promote a positive image of polyamorous life, though admittedly their conservative Mormon beliefs are at odds with the views held by most people who identify as poly. Insofar as poly child-rearing goes, the Browns show that it can work.

Wait - what? Occupy Wall Street the "most important event of our time?" Really? You have got to be kidding. No way is a bunch of unwashed protesters without a clue on how economics works more important than all the people lost on 9/11/2001.

OWS has accomplished something that the President, the media, academia, the party structures, *nobody* else could bring themselves to do. It got the nation to see and talk about the unmentionable elephant that has been growing in the center of the national living room for the last 30 years. The enormously widening income/wealth/opportunity gap is a profoundly new, *un-American* alteration of society in the last generation. It affects everything around us -- and a year ago no one dared mention it.

Now I come home and open the mailbox, and it's suddenly on the cover of The Economist, Time magazine, etc etc, with lots of graphs and tables. After 30 years the dam finally broke on speaking about it -- because of the moral force of some nobodies pitching tents, at what turned out to be exactly the right time and place.

Famous patriotic American Peter Griffin was quoted as passionately pointing out that "9/11 changed everything." So clearly, it must be true. And for the entire planet.

Yes, #Occupy is one of the most important events of our time. Those who don't understand that, and actually bring up one terrorist attack over hundreds around the world in the last decade as proof that hundreds of thousands of Empire citizens peacefully taking to the streets is insignificant is clearly going to miss out.

Most ppl under 25 these days in Canada and the US are poly. Unfortunately, most of those are still just as determined not to commit as previous generations in that age group, so polygamy has yet to become as hot a topic as polyamoury. But make no mistake: some of those kids will abandon the poly lifestyle to "settle down and get married" so they can have kids and such, but many won't want to give up all their loves to pick just one. When they want to all buy a house, or have a sick member covered under their health care, or make sure any of the adults can pick up their kids from school, you can bet that polyGAMY, not just relationships, will become a much bigger deal for them. And we have very little time to shift that viewpoint in Canada before the big court cases hit. We are all together in this fight, regardless of what commitment level you currently enjoy. Just sex, something more, all living together, or the full meal deal. Someday if not already, you may all want legal protections for all your family - partners and kids, and only by demanding equal marriage under the law will guarantee that our rights are the same as everyone else's.