Tonight's polyfamily on TV, and recent others 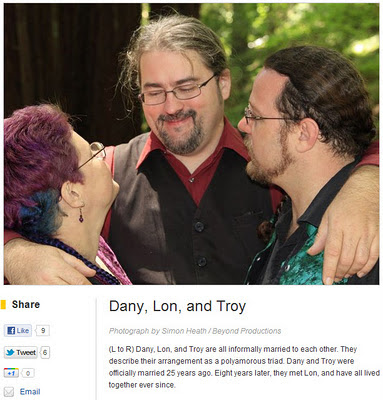 ● Tonight (Tuesday Jan. 10) the National Geographic Channel airs a segment about a longterm California polyfamily (above, from the NatGeo site) that it filmed last June for its "Taboo" series. "Taboo" is on at 9 p.m. Eastern time; see schedule. The polyfamily segment seems to be the last of three in the one-hour episode, which highlights. . . umm. . . unusual people and practices. The episode's title is "Odd Couples."

For more about it, and some thoughts and reservations by the people who participated in it, scroll down near the end of my post last week.

UPDATE: Just watched it. What a sweet portrayal from start to finish! Cuddly kindness and family warmth, intelligence and thoughtfulness, and such a steady smooth flow together after 17 years as an equilateral triad. They certainly need not have worried about how the show would treat them. See my next post.

The show is not online yet, but if/when it is, it'll get my "The Best" and "Show Your Parents" tags.

Now, on to the other committed poly triads on TV in the last few days:

Local ABC stations are airing clips from it, such as this one in Philadelphia: Polyamory -- Could you do it?.

They've also been filmed for ABC's Nightline, which could air any day now. UPDATE: This appeared on January 11; watch it here, or without ads on YouTube here (6:30). It's similar to their previous appearances, baring both their joys and troubles.


● I think an especially significant televised polyfamily was the fictional one on last Thursday's season premier of ABC's "Private Practice." A subplot running through the episode was a polyfi triad seeking to have a baby. Their respectful, sympathetic portrayal blew me away. It reminded me of the first pioneering TV treatments in the 1970s of gays as people rather than as jokes.

"Private Practice" is a medical drama that follows a group of doctors and their lives and patients. In comes a nice, seemingly conventional lesbian couple, Kendra and Rose, to interview with the fertility specialist. They've been together six years and want a child — one woman will be the egg donor, the other will bear the baby. Also along for the interview is the intended sperm donor, Evan. They indicate that he's just a friend helping out, though when questioned, he says he does plan to be around as "the fun uncle." When the counselor advises the women that they need to have him sign away parental rights, they balk, and the truth comes out: they're not actually conventional at all.

"We're all in love," they reveal, holding hands.

"We know it sounds crazy—"

As they're explaining: "That first night was amazing. And, so was the next morning. And, every morning after that. Most mornings."

They intend to be three parents as truly as possible: sperm donor, egg donor, and pregnancy carrier. (I actually know a triad like that!!) The counselor challenges them about the difficulties that they and the kid will face from society at large. They know, and say they are prepared to face it.

The docs in the practice discuss it among themselves. "A what?" "A polyamorous triad." They debate. "...That's the same argument that said interracial and same-sex couples shouldn't have children." The docs come to agreement: they will do the egg fertilization and implant, as the three wish.

But this is a TV drama, right? An ultrasound reveals a problem. "Unfortunately Rose's body is incapable of producing viable eggs or carrying a fetus." Kendra and Evan, meanwhile, have tested out fine; they could have a baby in the usual manner. Rose is devastated, and is threatened about being left behind in such a fundamental way. The three have already explained to the docs that they live by a rule: all decisions must be unanimous. "We have to avoid the two against one, so no one feels ganged up on." Kendra and Evan are just fine with having a child for the three of them regardless of this bump in the road. Rose objects and lays down a veto: "We're not having a baby." And walks out.

She needs time to process this blow, says one of the docs. "Hopefully their relationship will be strong enough to overcome it."

Later we see the fertility doctor in a heart-to-heart with Evan and Kendra. The doc explains that Rose fears "that the two of you might share a bond that she can never be a part of."

And later we see a doctor with Rose. Rose asks, "What if a baby changes everything?" Doc: "If the love is real, it can withstand anything." Rose: "Do you really believe that?" Doc: Well... no. "Sometimes life rises up and wins." Rose: "That's what I'm afraid of."

But life makes no guarantees to anyone; sometimes you just have to move forward on faith. As the show nears its end, we see the resolution. Rose has worked out her decision. "You two can make our baby," she tells Evan and Kendra. Relief. The last line of the discussion: "And we will all be together."

The 43-minute episode (with several unrelated plots interwoven) is up for viewing on the show's website. It will also be free on Hulu until early February. Title: "Are You My Mother?", air date 1/5/2012.

You can leave a comment on the episode's page (which mostly seems to be hardcore "Private Practice" fans).

This comment has been removed by a blog administrator.