Poly activists, researchers, and therapists have long tried to get a foothold at mainstream academic and professional conferences. They achieved a milestone last Wednesday (May 9) with a well-attended panel at the convention of the American Psychiatric Association in Philadelphia. Ken Haslam, who was there, posted to the Polyamory Leadership Network about

...what was probably the first-ever formal discussion of polyamory at a psychiatry convention. William Slaughter (a psychiatrist from Harvard), Richard Sprott (a psychologist), and Eli Sheff (an academic sociologist) presented a wide variety of polyamory topics to a standing-room-only audience of psychiatrists. It would appear that polyamory has, to a very small extent, finally made it onto the screen of mainstream medicine. 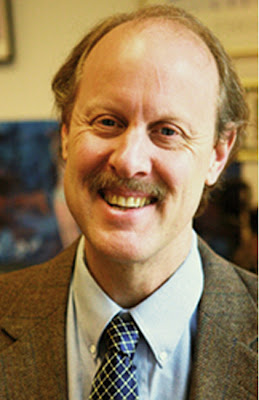 That's Bill Slaughter at right. Here's the session listing in the program:

Here are Sprott's PowerPoint slides from his part of the presentation: "A Review of the Research on Polyamory."

One of the people attending the session was a medical reporter for the Philadelphia Inquirer, the major local newspaper. She didn't hold out much hope at the time that she would get an article published. But in this morning's paper, here it is:

Experts in Philly describe mysteries of polyamory: When one lover isn’t enough

You think a romantic relationship between two people is hard? Try polyamory.

A panel of experts at the American Psychiatric Association meeting in Philadelphia last week said that open relationships between more than two people can work, but it requires a lot of talk about rules, boundaries, and time spent with various lovers.

William Slaughter, a psychiatrist in Cambridge, Mass., who has been treating polyamorous patients for about five years, said they need to have very good communication skills and be especially good at “mentalizing” or understanding others’ emotional reactions. He and Richard Sprott, a psychologist at California State University East Bay, and Elisabeth Sheff, a sociologist who recently left Georgia State University, talked about what to expect from polyamorous patients. Such patients often complain that they have to spend too much time educating their therapists, Slaughter said.

...The most common presentation, the panel said, is a couple that considers their relationship primary, while each may also have secondary relationships with other people. Sometimes all the relationships are considered equally important or all secondary.

Sheff said she knows of one group of seven, but that’s unusual. “When they get larger than quads, they’re a moresome,” she said.

...Sheff and Sprott believe polyamory is increasing. Sprott said younger generations are less insistent on monogamy than their parents. He cited research that found that 29 percent of lesbian couples, 29 percent of cohabiting straight couples, and 47 percent of gay couples are not monogamous.

...The panel said there is ongoing debate about whether polyamory is a choice or a sexual orientation. Some people float between monogamous and polyamorous relationships.

Sheff has studied children in polyamorous families. In her small sample, the “kids tend to be in great shape.” These families often aren’t obvious to the mono world. They look like a couple whose good friends come over a lot or people who are good friends with their exes. Most are discreet about sex, so the kids aren’t confronted by it and neither are their friends.

Sheff said the children say they like having extra adults in their lives. There’s always someone to drive them somewhere or help with homework. “A number of them expressed pity for children who only have two parents,” she said.

The important point for therapists, she said, is that polyamorous families are “not definitionally pathological.” While they don’t follow conventional morals, they do establish clear ethical codes that emphasize honesty and treating others well.

...Slaughter said people in the poly community come to him for the same reasons as other patients. Some extra issues include secret affairs, coercion, grudging consent, the opening and closing of marriages, and fears about child custody. A particularly emotional time is when a couple decides to enter the poly community together, he said. They have to work out new boundaries. They ask: “How much time do you spend with me? How do I know you love me?”

Asked about sexually transmitted diseases, the panel said this issue is probably discussed in more detail in the polyamory community than among other groups. People may agree on complex sexual rules, including “fluid bonds” that spell out whom they’ll have sex with without condoms.

Regarding this bit — "patients often complain that they have to spend too much time educating their therapists" — print out and give your therapist in advance this excellent, professional booklet: What Psychology Professionals Should Know About Polyamory. It's produced under the auspices of the National Coalition for Sexual Freedom (NCSF). The paper copies of the first printing have all been distributed; a second edition is currently being edited and printed, funded by yours truly.

I read this article in the Inquirer this morning and thought of sending it to you, but I had only the paper copy, not a link. I am glad you were quick woth it.

Alan - Thanks so much for the awesome gift to the poly world that you are. How wonderful that you are funding the 2nd edition of the pamphlet for therapists!

And this session at the APA con is going to be quite visible to the therapy community for a long time to come. (I'm hoping it can be purchased by non-APA members.)

I so appreciate Bill, Eli and Richard making this happen.
It wasn't very long ago that the APA didn't seem to want anything to do with the topic. But there is an ever increasing demand for poly-savvy therapists, and that demand is motivating the mainstream therapy community to take notice and start to come up to speed. We still have a long way to go to have enough to adequately meet the demand.

This is an important step forward toward resolving a vexing challenge our community has struggled to meet for a very long time now, and as a result we have an extra reason to be optimistic about the future.

Again with "when one lover isn't enough"!!!

I repeatedly point out when talking about polyamory/polyfidelity that for me and my beloveds that simply is not the issue: "One isn't enough."

The issue is that some marvelous person comes along, and the net gain for all concerned is exponential and celestial. It is a rich human dynamic.

It isn't "harder than two"--it's more complicated, but at some level it's easier, because any one of you cannot get away with the crap En Famille that you can foist on just one other person. It requires more honesty, more self reflection, more patience, more attention...but the rewards are, in my experience, more profoundly humanizing and enriching to the spirit than any other path I've ever been on.

BTW, my partners and I didn't hunt; we found each other through the course of life. I had been non-polyamorous for 20 years, then not for 15. Then thie person appeared, and both my partner and I knew we had to open the circle, and the person felt the same way. This is a daily living miracle for all of us.