"Showtime’s Polyamory Is Trashy, Profound and the Best Reality Show on TV"

This review, written by an outsider to poly on an important website covering the media industry, illustrates the power of the Showtime series (which just aired its third episode) to put our concepts into mainstream play. 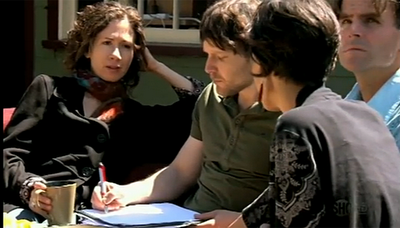 Showtime’s Polyamory Is Trashy, Profound and the Best Reality Show on TV

Just as the concept of polyamory is many things to many people, so is Showtime's current series Polyamory: Married & Dating. It's alternately hilarious, shocking, poignant, titillating and cringe-inducing. But it's also important.

...It works not just as the freak show that we've come to expect from reality TV, but also on a political level. The slippery slope anti-equality argument stating that if gays are allowed to marry, then soon we'll have to allow multiple partners to as well, is bullshit not just for side-stepping the issue.... There is no legitimate ethical argument against the kind of configurations you see presented on Polyamory. If you don't want polyamory, stay out of a triad. Simple.

...The lives portrayed here are perfectly suited for the format. Reality TV typically forces its participants to examine themselves closely.... At the very least, [they] are made to sit through marathon interviews picking apart the nuances of their behavior and its motivation. Never have I seen a situation that naturally fits this format as well as that of Showtime's currently airing. As Tahl explains in the video above, "Jen and I have our rules. Mike and Kamala have their rules, but now not only are you just bringing two couples together – it's a four-way dynamic. And so, it makes it more complicated." With their intricate configuration, these people would have to openly and routinely examine their and their partners' emotional situations, with or without cameras pointed at them. The show was already going on.

The emotional articulation of the four described people makes for riveting viewing – not since the early days of The Real World have I been so obsessed with watching people sit around and babble about themselves and their lives, nor have I so deeply lamented that they only do it for 30 minutes once a week. Their self-consumption is infectious.

Keeping track of the rules makes this non-competition series something of a game. As it unfurls steadily, slowly revealing new offshoot scenarios that can affect or avoid the central relationship dynamic, Polyamory builds intrigue.... At one point, when Kamala is riding Tahl, she asks, "Do you need me to slow down, Jen?" Jen responds, "Um," and then murmurs yes, spoiling the entire point of everything.

...You could create a drinking game... from just taking a shot every time someone says something that was spawned from, and exists only in, this universe (Kamala: "When Michael said that I was acting monogamous, I was like, who are you talking about? I'm the queen of poly. Who are you calling mono?"). Even better is the poly lingo. The male-female-female thruple of Anthony, Lindsay (a married couple) and Vanessa (their girlfriend) regularly say things like "honoring the function of the triad" and "new relationship energy" and, "I think you can be grateful about this pain."

...While the show illustrates the emotional complications and possible turmoil that result from loving more than one person, it humanizes those involved to a degree that we've never seen. It is at once a cautionary tale and an argument for the freedom to participate in these kinds of living/loving situations. As such, it is as complicated, strange, hilarious and involving as these situations clearly are themselves.

Go to the review and play the new 2-minute video there, from which the frame above is taken. It shows the quad having a serious poly relationship-agreement discussion out on their patio. No wonder the reviewer's mind was blown. For the first time, right on TV, it's showing the world how people can actually do this thing.

By the way, Episode 3 last night seemed to me a bit flat. We see lots of processing and relationship check-ins among each of the two family groups, without much dramatic arc of buildup and release across the show's half hour. Viewers may wonder, do polys spend all their time talking about relationships? (When they're not having sex?) (Answer: probably more than most.)

Poly lists are having some heated discussions about whether the show represents us poorly by displaying too much drama and imperfection. Come on, people. A good show is about storytelling. That means at least some conflict, drama, and resolution, as storytellers have known since Homer. Gossip had it that the (mild) drama in Kamala's family over her not wanting to share Roxanne was deliberately exaggerated in order to meet the storytelling needs of the show; else where would be the story? (Update: Director/producer Natalia Garcia, who was there, tells us that the situation was very real and nothing was made more dramatic.)

I come away from Episode 3 confirmed in thinking that the show is a much bigger plus for us than a minus. But this is irrelevant — we can't dictate how the media treat us, we have no right to, and the horse is already out of the barn. I hope our movement is secure enough to grasp this. What we can do is do our own parts to represent ourselves well and try to influence portrayals of us favorably — respecting that the media's interests don't always align with ours and that this is as it should be. It's their job to do their own job.

Which brings up a practical issue. Who will be on Season 2, if Polyamory: Married & Dating is renewed? The producers will probably want to introduce new characters. Could this be you?

If you decide you'd like to try out, I strongly recommend that your first move be to contact Joreth of the Polyamory Media Association for some background realities, coaching, and advice.

Not all polys -- or humans -- are perfect. Conflict happens. The characters are doing an incredible job of modeling how to discuss, process, and work it through calmly with genuine caring and respect. Where do we EVER see this on TV?

I'm going to work on my review of episode 3 tonight, though it may take until Monday/Tuesday for it to be published on the Modern Poly site. I saw the processing as a welcome contrast to the heated drama of episodes 1 and 2.

Interview questions have been sent to team triad - a couple of them relating to the nature of reality tv and addressing the community response :)

I'm also setting up a project where the community has the ability to put their money (or personal stories) where their mouth is.

As to this article iteslf, I love that quote so much! And I love the article, at least for the most part.

As to the series as it sits after E.3, we need before long to see more of the good stuff, the real love and generosity and sharing and compersion, too. That's important. And rather than downplaying the challenges, so are cautionary tales of how it might go wrong and what to do if it does (or what not to do).

In fact, I think it's important to show the latter. The show won't be real if they don't and people will sense it. That might assure us of no season 2. And people are better off knowing what they are getting into. Every time.

My triad was in the running for this reality TV show, but in a lot of ways we ended up being "too boring". We lead very interesting lives, own businesses, work in start-ups, have very diverse and intense backgrounds, and have exciting hobbies. But on the home front of polyamory, we are boring. We just don't have enough drama, and jealousy is something we rarely deal with. We just received another rejection from a media source because we "seem too settled" and they were looking for people "still figuring it out".

I am sure that the actors in the TV show have less drama in their lives than the show portrays. Some of it almost seems construed. It is the nature of reality TV and entertainment and I didn't expect any different.

Either way, we are gaining more publicity and with publicity comes wider acceptance. People are more afraid of things they don't know, and the more familiar polyamory becomes to people, even if it involves a disproportionate amount of drama and sex, and a lack of diversity, it is still doing us all a favor.

we cant wait to see next weeks. my 26 yr old daughter is even watching it. we hope it has a season 2 we will watch it.