Gay throuple profiled, and more gay non-monogamy news. Get used to it. Gay culture is distinct enough from what we call the poly community that it has evolved its own word for a triad: a "throuple."

Following our last post about an MMM partnership in the media (and the one before that), New York magazine now profiles another, in depth.

Benny Morecock is in a “throuple” with two partners [photo above]. Their family business is a gay-porn company in Long Island City. The Cleavers they’re not — and yet their home life seems positively wholesome.

And here lies a second explanation for Benny’s — and, by extension, CockyBoys’ — microfame. Adrian explains that he is driving upstate to the house that he shares with Benny, who is now puppyishly tugging on Adrian’s hand, and Jason, who is the CEO of CockyBoys. The three men have been together for just over four years — a “throuple,” Benny calls it, putting air quotes around the dumb word. Their throuplehood is more or less a permanent domestic arrangement. The three men work together, raise dogs together, sleep together, miss one another, collect art together, travel together, bring each other glasses of water, and, in general, exemplify a modern, adult relationship.

Except that there are three of them.

A week after their first date, Benny and Jason hung out again, and this time Adrian joined in. “I’ve had three-ways where there are limbs everywhere and it’s really awkward,” Benny remembers. “You come out of it like, ‘God, that was stressful.’ But not with them.” A sexual relationship began, and continued, and although none of the men can isolate a specific moment when the couple turned into a throuple, there was a point, they all agree, at which everyone became sufficiently in love with each other to give it a name.

It is important, perhaps, that each pair within the throuple has a private bond: Jason and Adrian have their history, ­Jason and Benny work together, and ­Benny and Adrian are close in age. Benny tells me there is zero jealousy among the three. “That’s probably the thing that leaves people the most incredulous,” he says....

The throuple’s house upstate is a rambling place with rooms for every mood and plenty of lawn for the dogs to run around on. There’s a pool, a formal garden, a sunroom, a balcony, and a veranda—throwbacks to a genteel era of differentiated leisure zones. The place is capacious enough to be spooky in winter and guest-friendly in summer. When I show up for a weekend visit, Benny pours bourbons and takes me on a tour of the throuple’s art collection, of which Jason is head curator....

As I fall asleep, I can hear the men laughing at a TV show downstairs and playing with the dogs. It feels like a celebratory night (pizza, ice cream, bourbon) but also, internally, a destabilizing one. Does throuplehood raise or lower the stakes of being in a relationship? If one of the men defects, do they all break up? What’s it like to inhabit a category of relationship that is entirely different from that of everyone you know?

Still, the impression I have from spending time with Benny, Jason, and Adrian over the past months is that the men are glisteningly, boringly happy. This seems to be the consensus. “No matter how hard I try, I can’t wrap my head around it,” says Paper’s Elliott. “It’s amazing. It’s modern. There’s nothing sensational about them — the relationship isn’t theater. It just works.” Maybe the best way to understand how a throuple functions — or at least how this throuple functions — is to imagine a healthy couple, then factor in the sexual variety of a third partner, and then factor in the stability of a third partner. It’s strange but true: In tripod manner, a third leg appears to be a good method of favorably distributing tension.

A great deal of their success, I am sure, rests upon the fact that traditional biological parenthood is off the table. (The only other throuple I’ve known was a trio of lesbians who walked their dogs together on the beach.) It may also owe thanks to their immersion in a business where unconventional sex is exempt from moralization.... For his part, Jason ­describes the whole arrangement as ­feeling perfectly normal. “We rarely all three fight at the same time,” he says....

The article appeared in New York's sex issue. Here's commentary on the article and the issue at Autostraddle ("News, Entertainment, Opinion, and Girl-On-Girl Culture").

Meanwhile: Have you seen the kerfuffle over the boyfriend of newly-out TV host Anderson Cooper being photographed kissing another man? Writes the editor of Huffington Post/ Gay Voices: 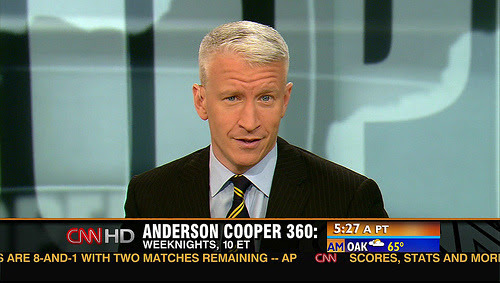 ...Almost immediately my Facebook feed was filled with comments gushing sympathy for Cooper, who, it was assumed, must be locked away in his multimillion-dollar bedroom, alternately sobbing and stuffing his face with thousands of woe-is-me calories in an attempt to dull the pain of this awesome betrayal.... and just weeks after he had so bravely ventured out of the closet (and just weeks before he and [boyfriend Ben] Maisani were supposedly going to get hitched).

...But I wasn't thinking about any of that. I was having fantasies about what a radical moment this could be for America. Just days after Mary Gonzalez came out as the United States' first openly pansexual politician (and in Texas, no less!), we were suddenly being gifted with another chance to challenge how we think about sex, love, relationships, and what it means to be queer in this country.

Because... there's a very good chance that for Maisani, like many gay men in long-term, healthy, committed relationships, a make-out session in the park is not only acceptable but just another typical Saturday-afternoon activity.

It can be hard for some people -- both straight and queer -- to fathom that a non-monogamous relationship could not only function satisfactorily but be an ideal arrangement. But in the queer community, which has fewer hangups and restrictions on sex and less rigid parameters on with whom and how we love and lust, open relationships have long provided the stability of partnership with the excitement of being able to meet and sleep with other people.

So instead of assuming that Maisani was cheating on Cooper, as almost all the media outlets have done, why not assume that Cooper knew exactly where his boyfriend was and had simply said, "Have fun with Bob. I'll see you later tonight. Oh, and can you pick up some more milk? We're almost out"?

Because most of America isn't ready for that....

Even some queer people worry about what the larger consequences of non-monogamy could be....

But in my fantasies, we're not gunning for gay acceptance -- especially not if the only way we're granted it is by "behaving ourselves" and struggling to fit into a heteronormative mold (which, as far as I can tell, hasn't really benefited heterosexual people very well, either). Instead, I want us to be pushing for queer liberation, which, to me, has always meant that when it comes to sex and love, we all get to do whatever we want with whomever we want as long as we're not hurting anyone....

Some of the celebrity press is saying Cooper and his fiancé don't have an open relationship, but the New York Daily News gossip columnist says they do.

I will say that my favorite episode is Episode 6 -- "Radical Honesty." It's extremely emotional, the families are at their rawest. I am so proud of them and I cry every time I see that episode. I hope everyone catches that one.

In ten years we will all be wondering what the fuss was over. Some people prefer monogamous relationships, some are poly and closed, some are poly and open, some are single and dating and always will be -- "get used to it." Respect other people even if they are not just like you.

I don't know where people are getting the idea that there are different terms for poly families in the gay community. None of the gay men I know in poly relationships use the term "Throuple" we all use the term Triad. (at least then there's three of them, I'm in a quad.)