"I think we have some news from Brazil that might be interesting," wrote Daniela, our correspondent there, a few days ago:

A poly family of three went to a Notary and Registry office to register their polyamorous union and make provisions about their assets, etc., a few months ago. This has just hit the news in the last couple of days. In Brazil you can live in "união estável" (stable union) and be recognized as a family under the law. People make a declaration in the Notary and Registry office to facilitate the recognition of the union.... The law is about a man and a woman living like a family, but recently same-sex couples started to declare their unions and fought for the same rights; the Federal court has ruled in their favour. This poly family is going through the same route....

The three write, “For the first time in history we got a document with a state seal/stamp (which means it’s suitable for legal purposes) declaring as legal a polyamorous relationship.”

Daniela sends these news stories about the triad's registration and its ambiguous legal status. Below each is a machine-English rendition by Google Translate:

According to these reports, other polyfamilies have been seeking out the notary in question for these "Deeds of Polyaffective Union."

And now the BBC Latin America service has picked it up:

A notary in the Brazilian state of São Paulo has sparked controversy by accepting a civil union between three people.

Public Notary Claudia do Nascimento Domingues has said the man and two women should be entitled to family rights.

She says there is nothing in law to prevent such an arrangement.

But the move has angered some religious groups, while one lawyer described it as "absurd and totally illegal".

The three individuals, who have declined to speak to the press, have lived in Rio de Janeiro together for three years and share bills and other expenses.

Ms Domingues says they have already opened a joint bank account, which is also not prohibited by any law.

According to Globo TV, the union was formalised three months ago, but only became public this week.

Nathaniel Santos Batista Junior, a jurist who helped draft the document, said the idea was to protect their rights in case of separation or death of a partner, Globo reports.

Ms Domingues, who is based in the São Paulo city of Tupã, said the move reflected the fact that the idea of a "family" had changed.

"We are only recognising what has always existed. We are not inventing anything."

"For better or worse, it doesn't matter, but what we considered a family before isn't necessarily what we would consider a family today."

But lawyer Regina Beatriz Tavares da Silva told the BBC it was "absurd and totally illegal", and "something completely unacceptable which goes against Brazilian values and morals".

Ms da Silva, who is president of the Commission for the Rights of the Family within the Institute of Lawyers, says the union will not be allowed to remain in place.

Some religious groups have also voiced criticism of the move.

While Ms Domingues has approved the union, it is not clear whether courts, service providers and private companies such as health insurance providers will accept the ruling.

Update, August 29: Daniela now writes, "It looks like polyamory has become the topic of the month in the media in Brazil. There are stories, good and bad, everywhere: newspapers, weekly magazines, religious channels... But there is one that I find really nice. A magazine directed towards schools and educators has published an article explaining what is polyamory in a simple, clear and unbiased way:

Polyamory is a movement that emerged in the eighties in the United States, with its first international conference held in 2005 in Hamburg, Germany. [News to me. --Ed.] Unlike romantic monogamy, it believes that it is more happy, healthy and natural for people to love and be loved by more than one person at the same time. Unlike the free love, this kind of relationship places more emphasis on friendship and companionship, not necessarily or only sex, not encouraging promiscuous relationships. Thus, it argues for the possibility of responsible, deep and lasting relationships with two or more partners simultaneously. Whereas one person cannot complement another in all respects, nor meet all needs, poliamoristas believe that their lifestyle avoids the need for the constant and obsessive quest to find someone perfect, recognizing the limitations of one another — and is therefore more sensitive/accommodating of defects and differences between partners. Also, [they say] polyamory breaks the fear of loneliness, abandonment and betrayal that they say is typical of monogamous relationships. Accordingly, they argue that their viewpoint allows romantic partners to be more honest with each other, and loyalty seen as synonymous with trust.... 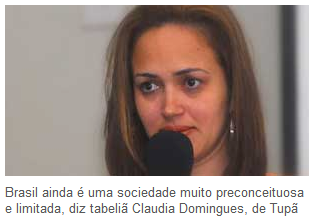 Update, August 29: BBC Brasil has published an interview with the public notary, Claudia do Nascimento Domingues:

It's nice to see government officials recognizing what has always been in place, and not allowing particular religious beliefs to rule their thinking. If only American lawmakers would use their brains, instead of allowing the dictates of a certain religion to dictate what's legal.

The Guardian brought an opinion piece that used the Brazilian case as the starter to argue that it should be legal for multiple people to marry.

The comments against the idea are low on specific points.