Kamala Devi: "How a Reality Show Altered My Reality"

Still no word on whether the Showtime cable network will do a second season of Polyamory: Married and Dating. The first season's seven episodes ended three weeks ago. Cold fact: most new shows are not renewed. According to the Neilsen ratings, the final episode had 209,000 viewers. I don't know if that number is good or bad for a late-night, paid-premium cable show.

Meanwhile, Kamala Devi of the quad family in the show has posted "Top Ten Ways the Polyamory Series Changed my Life". It's her most revealing account of the experience. 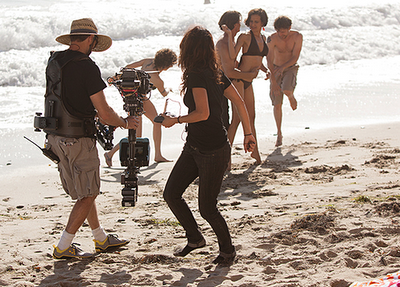 If the series had a leader figure, it was Kamala (second from right above). Among other things she discusses how the family of four was shaken, changed, and bound together anew by the experience of displaying everything before the cameras — intimate relationships, lovemaking, strengths, weak places, and personal flaws they did not quite know they had. A few excerpts:

How a Reality Show Altered My Reality: Top Ten Ways the Polyamory Series Changed my Life!

...Unlike in most reality TV, I was happy to learn that our docu-series was not set up, scripted, or edited radically out of context. Ultimately, however, this half-hour show can only capture a mere snapshot of the complexity of our love lives with 13 minutes per family, per week.

...#8. Average people are hearing about Polyamory, and getting a sense of what it means.... You can imagine my relief when the show finally hit the air and people started talking, blogging and tweeting about it. It’s fun to watch Polyamory go from only being conversed about at sci-fi conferences and renaissance fairs to becoming all the buzz during corporate coffee breaks.

#7. Friends, family and even strangers feel entitled to express their advice on what I should do. Of course, when I put myself in the public eye, I expected a certain degree of controversy, but I didn’t expect Showtime could magically turned Polyamory into an armchair spectators sport. Admittedly, if I weren’t personally involved in this project, I probably would not reserve my humble opinion as a poly activist either.... It’s surprising how personally attached and deeply pained people are by what happens on the show.

I’m working hard to have compassion for those who seem to have no idea how the media works. They seem to take every word as gospel; as if whatever was captured on camera must be “the truth, the whole truth and nothing but the truth.” And that there is no space behind the scenes, or off camera, where we might self reflect, change our minds, or learn from what was just said....

#6. I am forever bonded with my lovers.... Having cameras in our home (and especially in our bedrooms) became a powerful spiritual practice that allowed us to better observe the ego. When a handful of lovers agree to join us in this conscious experiment, the result was alchemy that inextricably bonded everyone involved. Through the process we all learned to be better communicators, we broadened our perspectives and sometimes even saw our issues from outside ourselves. (I recommend everybody try this: the next time you get into an argument... set a camera up, press record, then post it on youtube to see what you learn about yourself ;)

Letting the camera crew witness our lovemaking added yet another level of vulnerability as well as personal growth. It was a truly powerful practice to help dissolve insecurity, body issues and sex shame. One of the most frequent critiques of the show is “you make polyamory seem as if it’s all about sex!” Admittedly, I value sex, a lot, and as a sex educator I likely have more of it than the average poly person. By design, this show is late-night, adult-programing, so it might focus on us making out for a disproportionate percentage of our 13 minutes, but where else does the American public get to watch real people who love each other make love without guilt, or shame?

...I remember that several years ago, I made a pact with the universe: I promised to tell the truth, not just to the IRS or my lovers, but to anybody who was seeking it. I have since been practicing total transparency. I believe it was because of this commitment not to lie, withhold, or deceive anyone, that my director Natalia Garcia found us [and] consequently sold the project to BermanBraun and Showtime.

I was skeptical of Hollywood at first, but I now see reality TV as the epitome of vulnerability and have come to understand why anthropologist Margaret Mead reviewed the first documentary style TV show “as new and as significant as the invention of the drama or the novel — a new way in which people can learn to look at life.”

...It was hard to step off my soap box and work through my own jealousy, judgments and possessiveness on camera. This work has evolved me from a teacher to a role model who has to walk her talk. Now I have taken it upon myself to let the community see me fuck up so that they can learn from my mistakes. ;)

...The process of living on camera has been the deepest personal growth course, like grad school for me and my lovers.... And I’ve taken copious notes! To help other lovers not have to repeat our mistakes, my pod and I are creating a community manifesto....

Incidentally: if you missed any or all of the series, most cable subscribers can sign up for Showtime briefly and watch it via Showtime on Demand — but only through November 6th, then it vanishes.

Or, I hear you can go to www.sho.com, sign up for a risk-free trial period of Showtime Anytime, and watch all 7 episodes on your computer.

It would be nice if Showtime would sell DVD's of this.

Thank you Alan for posting this! Although we don't know if/when the show will be renewed for a second season, we have been told that the ratings are very strong for late night premium cable. I'm curious where you found these numbers? Perhaps we can compare them to Gigalos and Real L word since they are in the same genre and have a good track history of being renewed.

> where you found these numbers?

From a USA Today wrapup of that week's TV ratings: