"Non-monogamy and nerdiness in BC Poly Camp"


The Vancouver edition of Xtra, "Canada's Gay & Lesbian News," reports on PolyCamp Vancouver Island, the smaller (and over-18-only) of the annual rural outings for the Victoria-Vancouver poly community.

Wish I was there.

Non-monogamy and nerdiness in BC Poly Camp

POLYAMORY / Why are these poly people drawn to sci-fi? 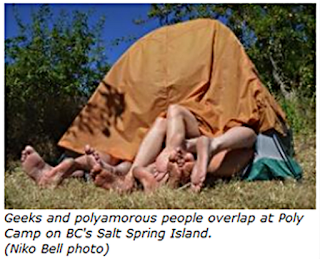 “Comic book heroes have origin stories,” Esha says. “So what is your origin story? What is” — she looks up and smiles — “your radioactive spider?”

At Poly Camp, on the windy northern tip of Salt Spring Island, talking about superheroes is normal. By “radioactive spider,” Esha means the moment when a polyamorous person realizes his or her or their own identity. She’s also revealing a curious fact about polyamorous culture: non-monogamy, fantasy and science fiction often go hand in hand. That’s what brought Esha to polyamory herself.

“Mine is science-fiction and fantasy books,” Esha continues.

Esha is sitting by the muddy-green pond in the orchard of Neptune Farm. Fourteen polyamorous people are sitting around her in the shade of the tent or the long grass, or tucked into the dragonfly-infested bulrushes.

...Esha is drawing on her legs in glaring orange highlighter as she goes on.

“Science fiction and fantasy books brought me up, largely. Maybe people want to write about alternative relationships... And if you put it in a setting that’s odd and weird, it’s non-threatening.”

An English graduate student from Victoria chips in: “That’s how Star Trek got away with dealing with a lot of topics in the sixties.”

“Give it a couple of light years removed and we’re all good,” laughs Eli, one of Esha’s boyfriends.

These poly people came from Victoria, Duncan, Vancouver and Seattle to camp for a weekend under the apple and pear trees, branches hanging heavy in the late summer. There are men and women, some still in school and some already retired, a scientist and a graphic designer. But as they talk, it becomes clear that Esha is far from the only one influenced by science fiction novels.

One poly woman from Victoria mentions sci-fi author Robert A. Heinlein, who described polyamorous relationships in his novels. A chorus of warm assent bursts from the circle. No fewer than five people credit Heinlein with drawing them to polyamory....

Count me in. When I was 17, Heinlein's Stranger in a Strange Land and some of its followers inspired me into what's now called poly. Changed my life forever. Though I've always had a love-hate relationship with Heinlein. For more see my Polyamory, Robert Heinlein, and His Definitive New Biography.

...But why do poly and science fiction overlap? Why are the people at Poly Camp, regardless of age or nationality, so comfortable discussing the latest Joss Whedon series or the evolution of superhero comics?

Campbell is as far out of the closet as a poly person can be. He’s been in a polyamorous relationship for 15 years, and he and his partner have been mentioned in the Seattle Times and Newsweek, and are the inspiration for the web series “Family.” Campbell notices that the poly community collects an odd number of software engineers and fantasy fiction fans. The Society for Creative Anachronism is full of poly relationships, he says. Fantasy and sci-fi conventions have polyamory panel discussions.

And sure enough, look around Poly Camp and the nerd culture is unmistakable. Two of the camp organizers — one naked and one clothed — play Magic: The Gathering while their mutual girlfriend lazes in the shade and keeps score. Josh and Scott admire another man’s intricate homemade chainmail kilt. Another sings songs from Dr Horrible, accompanying himself on the mandolin....

...Following Esha, everyone tells a radioactive spider story. A husband and wife with a crush on a mutual friend. Falling for a college roommate’s girlfriend. Waking up the morning after and making breakfast for three. The circle nods and smiles and laughs knowingly, conspiratorially, as if they share the best hobby on earth.

A 1976 study by psychologist Jacquelyn Knapp found that polyamorous people do indeed have character traits in common. They tend to be individualistic, academic, nonconformist and stimulated by complexity. They like endless communication. They enjoy picking over every subject in dizzying detail. Polyamorous people are the nerds of love.

Sitting by the pond, the poly circle is trying to describe what poly people are like. “Alternative.” “Critical.” “We love discussion.” “We don’t take things for granted.” “We like grey areas.”

Most of all, they want to reject the old and commonplace and look for the new and uncharted. They try not to mind what other people think. They feel just a little bit superior. They see themselves as the ultimate outsiders — boldly going where no relationship has gone before.

One big beef: I don't know how people use the English language out there in western Canada, grump grump, but those are not nerds, they're geeks! Come on people! "Nerds" are socially inept loners unable to connect. "Geeks" club together according to intricate brainy passions that may have no practical use (see Magic: The Gathering). And, ahem, a key geek trait is intense concern with proper classifications! Where was that woman's editor?!

...And of course lots of polys are familiar with xkcd. For instance,

Interesting concept. I have a non geek friend who refers to my triad as "what happens when you marginalize people and leave them alone to long."
I just laugh.

The photo caption did correctly use the term geek.