On Fox sitcom, poly as a defining Millennial coolness thing 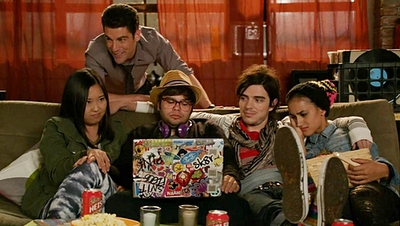 Just a few years ago polys were stereotyped as gray-haired ex-hippies. Now the largest poly discussion group outside of Fetlife (as far as I know) is reddit/r/polyamory, with close to 10,000 members, and reddit is mostly 20-somethings. We've seen countless other signs. (For instance. And lots more [includes this post; scroll down].)

On Tuesday (Oct. 9), Fox TV aired an episode of New Girl in which a 30ish Gen Y-er thinks he's getting old and un-cool. To dramatize this, screenwriter Berkley Johnson has four hip, cool Millennials move into the apartment across the hall. How does the screenwriter convey Millennial coolness? Partly by making three of them a polyamorous triad. Using those words. The older Gen Y-er (behind couch above) reacts with distress and envy of the young 'uns.

Jessica Karels of Modern Poly guest-writes us a review:

New Girl is a sitcom that focuses on the lives of four roommates: Jess, Nick, Schmidt, and Winston. I learned about the reference to polyamory in this episode from watching keyword searches on Twitter.

The episode involves the dynamics between Jess and Schmidt. Jess, laid off from her teaching job, works at a fast-food place. Schmidt, who is success-oriented to the point of being cocky, is disappointed that she's working part-time in a menial job. The tables turn when the new neighbors across the hall hate Schmidt and adore Jess. Schmidt starts to wonder if the neighbors hate him because they see him as "old."

After another attempt to be cool blows up in Schmidt's face, Jess tells him he's trying too hard. Schmidt soon finds out that the reason the neighbors don't like him isn't his age — it's that he's a "viciously unbearable asshead."

The amusing twist is that the age difference here is maybe 5 or 6 years. The young neighbors appear to be in their early 20s. We see an exaggeration of Millennial hipster culture — quinoa, sitars, hula-hoops, and iPhone covers that resemble cassette tapes (how ironic). The youngsters seem fixated on a bohemian lifestyle and come across as modern-day hippies and counterculturalists.

Polyamory comes up mid-show as Schmidt blames his age for why the neighbors dislike him. "They’re the future of humanity!" he laments. "A pan-ethnic, pansexual hive mind and they want nothing to do with me!"

Jess and Nick stumble through explaining the relationship dynamic:

Jess: "Brory, Sutton, and Fife are in a triad, and Chaz is a floater."

Apparently being polyamorous is now a Millennial thing. I'm turning 33 in less than three weeks. Thank you New Girl and Fox Network for making me feel old and validating my decision to switch my online moniker from "Young Metro Poly" to "Polyamory Pundit" :p

Some may remember seasons 1 and 2 of NBC's Parks and Recreation in 2009 and 2010, when young intern April was in a triad with two guys. The relationship ended, but it was sort of a characteristic-millennial thing while it lasted, and no one on the show spoke against it. A reviewer in the Los Angeles Times suggested at the time that it was "perhaps the first functioning polyamory on network prime time."

Labels: millennials, The Next Generation

There does seem at times to be a bit of a generation gap. My local poly organization has sub-groups that meet for socials.
One is mostly twenty-somethings meeting at a Hipster bar.
Then there are the potluck & brunch crowds which bring out folks in 40s and up, (which have the more stereotypical hippy, scifi geek and renaissance faire crowd).

As a 35 year old professional, I get slightly frustrated by not fitting in either sub-group so I just go to both and be the oddball. :-P

Since I'll be 70 in a few months, have been poly since 1967, and have poly relationships that have persisted for decades, I'm a little amused by the age segmentation discussion. For one thing, being poly means that, if you want to, you can have older or younger partners and still have one or more life partners your own age.

Given a culture that slams us with messages equating youth with sexy it is no wonder that younger people don't get how sexy experience can be. My 74 year old lover is deliciously subtle in bed, and my 69 year old life partner and I have a sexual ritual that satisfies repeatedly us like our favorite comfort food. And we are still learning new wrinkles as well.

But beyond sex, the rest of what we do together is enjoyable and meaningful, too. We have memories of shared experience that help bond us. And we have things to do together that interest us and bond us.

What's really new in poly is that there are enough of us now that children of polys are getting to know each other in a natural and fun way. Our now 10 year old grandson has come to the Northwest Poly Camp with us for the last three years. He has made great friends there among the 30 or so children that come. The first year he came, when he was 8, he saw me kiss my lover, L. He asked if Gramma knew about that. I said of course she does. He said, "I guess that's why they call it Poly Camp."

PS: I want to add that at various times in my life I've had lovers twice my age and half my age. They were wonderful in their own ways, and I learned a lot from them

As an almost 33 year old professional (who is only marginally interested in sci-fi and Ren Faire) I feel your pain :)

We just had our first poly potluck for people in their 20s and 30s.

We started this as a response to the generational gap between the 40s and 50s polys with different flirting styles and social norms. But I am starting to see another generational divide developing in the early 20s crowd, who have yet a different style. We're moving into 3 generations of poly, I think that's pretty exciting!

I am in my mid forties and have been poly for 20+ years. It is not a new trend, but it's certainly nice that it's becoming more mainstream, and more people see it as an option. I think it's kind of sad that generations want to segregate themselves. They have a lot to learn from each other.