Amelia Earhart's open marriage
back in the news

In 2008 I mentioned here that aviation hero Amelia Earhart, America's sweetheart who disappeared in 1937 over the Pacific, insisted on an open-marriage agreement with her husband before marrying him in 1931. Her typewritten letter to him has long been available online at the Purdue University Collection of Amelia Earhart Papers.

Last week, Los Angeles writer Amanda Hess rediscovered the letter and posted about it to her Tumblr site. It got hundreds of likes. From there, writers picked up the story at Feministing, The Frisky, Jezebel, Women's Voice for Change ("Redefining Life After 40"), and elsewhere.

"Earhart’s prenup has been quoted before," Hess wrote a couple days later for Slate, "but it seems to have struck a chord at this particular point in relationship history." This morning it spread to the op-ed page of the Los Angeles Times and probably onward.

When conditions are right, old news can become new news. 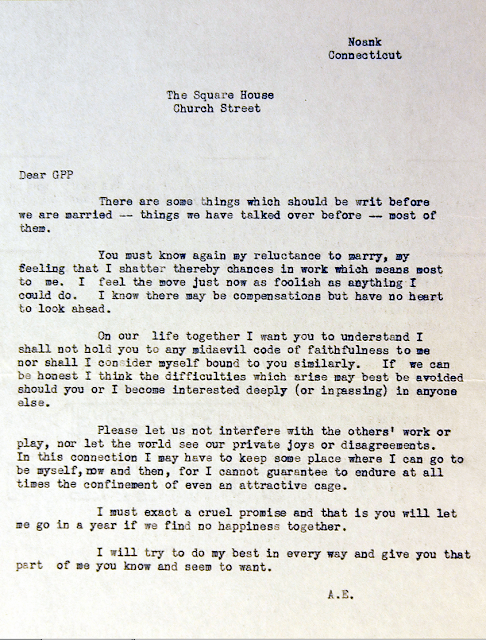 Wondering what a feminist icon living in the earlier half of the 1900′s thought about love and marriage? Look no further than the document above, a letter from Earhart to her future husband George Putnam.

You’ll remember Earhart became famous as the first female aviator to fly a solo transatlantic flight, redefining expectations of women along the way. Then, she tragically disappeared during a flight in 1937 (only to reappear in a “carefully scrubbed” and “exasperatingly dull” movie in which she was played by Hilary Swank, but that’s for another post).

Of course, we love her anyway for her courage and fierceness, and even more so having stumbled upon this priceless prenup agreement. Reading through the document, one thing becomes very clear: this woman had a clear sense of what she wanted out of a marriage. And I find much of her marital vision compelling, even today....

Dana LaRue, the editor-in-chief of alternative wedding site The Broke-Ass Bride, told me that she’d like to see marriage evolve “as a social construct away from a ‘lifetime commitment under God’ and more toward a ‘civil union in whatever form speaks most to those involved.’” And yet what ends up “speaking to us” today isn’t necessarily so different from what used to....

So many people doubt the entire institution of marriage because it seems like a rigid system that we impose upon ourselves — but if marriage can be as malleable and personalized as Amelia Earhart made it, perhaps it’s not as obsolete as we think.

And in today's Los Angeles Times:

A gayer approach to marriage

Everyone might do well to take a same-sex-marriage approach to nuptials, starting with not taking them for granted.

Amelia Earhart's "prenuptial agreement" with her husband, George Putnam, whom she married in 1931 when she was 32, drew a flurry of attention this week. Los Angeles writer Amanda Hess posted the letter on her Tumblr page after running across it in the online library of Purdue University, which houses Earhart's papers....

In Slate, Hess explained that youngish female bloggers read this proto-feminist manifesto and seized the opportunity to mull over the confusing, often contradictory state of modern marriage....

Some readers rightly pointed out that if a man had served his betrothed with a document like this (let's be clear, it's not a pre-nup, just a letter) it would not have met with the same level of enthusiasm....

Given long-standing theories about Earhart's ulterior motives for marrying Putnam — Putnam was a powerful publisher and she a writer, and let's not forget the lesbian rumors — it's probably best not to read too much into what may be an expression of anxiety more than anything else.

But that doesn't mean there isn't an appetite for new ways of looking at marriage. It's worth noting that the surge of interest in Earhart's unconventional approach came along just as the Supreme Court announced its plans to take on the issue of marriage equality, and after an election that legalized same-sex marriage in four states and sent an openly gay senator to Washington....

It's ironic, then, that as gay marriage becomes more popular, barely half of all adults in the U.S. are married....

Maybe straight people want what they can't have: to be gay married too. That is, they want the perks of legal partnership without the baggage of thousands of years of that very durable marriage tradition: an unequal partnership....

This is not to say that Earhart's version of marriage bears a closer resemblance to gay unions than straight ones... but it shares this with the gay variety: It requires some imagination, and conscious choices. Despite her plea for an early escape clause, Earhart wasn't so much thumbing her nose at marriage as much as customizing it....

> Given long-standing theories about
> Earhart's ulterior motives for
> marrying Putnam — Putnam was a
> powerful publisher and she a
> writer, and let's not forget the
> lesbian rumors — it's probably best
> not to read too much into what may
> be an expression of anxiety more
> than anything else.

As a commenter remarks on reddit, "I think this interpretation is suspect when it's lacking the context of how Putnam proposed marriage to her *six times,* and she kept refusing, until this time. And clearly, he agreed to her caveats."

"Some readers rightly pointed out that if a man had served his betrothed with a document like this (let's be clear, it's not a pre-nup, just a letter) it would not have met with the same level of enthusiasm...."

Ignoring completely that a man would not have had to insist on being allowed to continue his work or have a place to escape to: in the 1930s these were normal male privileges.

I wrote up George and Amelia's relationship story in a blog post almost five years ago and still today it gets significant amounts of traffic, definitely in my top ten all time. I included a nice pic of the two of them and one of the referenced letter from Amelia to George about her preference for an open marriage.

Their story seems to be captivating on many levels, and the mystery and speculation around her disappearance helps to keep it alive.

I can understand such an agreement then. Today I do not think is even necessary, most people are free to marry or not... you do not need to scape before marrying.

NOW THAT AMELIA IS IN THE NEWS AGAIN I HAD CONTACTED Ric Gillespie, THE PERSON WHO HAD BROUGHT UP THE DISAPPEARANCE OF HER AIRCRAFT. MY GREAT AUNT JENNY WAS GEORGE PUTMAN'S SECRETARY AT THE TIME HE AMELIA AND MR PUTMAN WHERE TOGETHER. MY AUNT WAS NOT MARRIED AND SPOKE OF HER ENJOYMENT WITH AMELIA. MY GRANDMOTHER HAD LETTERS (OF WHICH SHE DESTROYED) OF CORRESPONDENCE OF THE TWO. I BELEIVE THERE RELATIONSHIP WAS JUST AS YOU INDICATED IN YOUR ARTICLE. I KNOW MY FATHER (WHO WAS MY GREAT AUNTS FAVORITE) THOUGHT THERE WAS A LOVE AFFAIR BETWEEN THE TWO.