Bi and poly:
The connection and the numbers 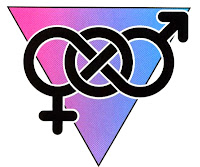 There's been a bit of an uptick in discussion of the bisexual-poly connection. For instance, on the blogsite of the mainstream  Montreal Gazette, a frequent columnist ruminated:

One of the biggest misconceptions about bisexual people, I am learning in my exploration of the subject, is that we are all polyamorous, that we have open lifestyles that see us engaging in multiple sexual relationships. Note the word “open” in that sentence. People who engage in polyamory, in theory, have the full consent of partners, as opposed to people who have “affairs”....

The fact of the matter is, bisexual people are mostly monogamous, from what I am reading. We have the capacity to love men, women and gender-variant people — as in, love transcends gender — but when they fall in love with someone and settle down, they do the traditional mating thing and are faithful to each other....

Or not, in large numbers. See further below.

...It wouldn’t surprise me if... biphobia is rooted in monogamy and the incorrect belief that bisexual people are compulsive swingers.

Sooo, now I’m wondering about the discrimination faced by polyamorists, or would-be polyamorists. Suddenly, instead of seeing sexual orientation as heterosexual or lesbian or gay or bisexual, I am seeing a bigger picture with monogamy vs. polyamory, and I am getting the sense that polyamorists may face more discrimination than all of the others combined....

Then there was this from Cary Tennis, the advice columnist at Salon:

In response to a recent column about a bisexual woman who was wondering if she should marry [where Tennis said "If there ever was a rational argument for polyamory and plural marriage. it is bisexuality"], some people wrote angrily to say that one does not have to want to be in a plural marriage to be bisexual.... They said that they were bisexual but happy in a committed monogamous relationship.... I erred in not speaking to enough bisexual people to understand the sensitivity of the issue.

But let me state affirmatively what underlies my thinking. People need to make choices based on who they really are. In order to do that they must have legal choices that suit who they are.

...Sometimes it is politically unwise to acknowledge the obvious.... Right now, we are seeing an unprecedented leap forward for sexual freedom. Ought we not take advantage of this moment and try to see the logic of the situation clearly?...

Speaking of logic (sigh), for the purposes that argument one could just as well be attracted to "both blondes and brunettes" as to "both men and women," but never mind. (I like Angi's take on his argument that she's just put up at The Radical Poly Agenda.)

More interestingly: How many bi people actually are poly? And vice versa?

A few years ago I rounded up research on this, and later Kelly Cookson of the PolyResearchers list added some annotated bibliography. Here's my current condensed version:

1. Bi Polys. There's no question: bisexual people are way more abundant in the poly world than elsewhere. Some statistics and observations:

In her article "Polyamorous women, sexual subjectivity and power" (Journal of Contemporary Ethnography, 34, 251-283; 2005), Elisabeth Sheff writes, "Bisexual women were quite numerous in polyamorous communities. In fact, bisexuality was so common among women in the polyamorous community that they had a standing joke that it allowed them to 'have their Jake and Edith too!'" (p. 266).

My own observation is that when you ask a roomful of people at a poly conference how many consider themselves bi, something like 30% or 40% raise their hands. Workshops at poly conferences on exploring your bisexuality are well attended. Various other informal estimates have put the proportion of bi polys at 30% to 60% of all polys. This compares to just 2.6% of the general population identifying as bi (at least among 18- to 44-year-olds, according to the CDC's National Survey of Family Growth, 2006–2010).

2. Poly Bis. Firmer statistics exist for the other side of the coin: How many bisexuals are poly?

Psychologist Geri D. Weitzman, in her paper "Therapy with Clients Who Are Bisexual and Polyamorous" (Journal of Bisexuality, Vol. 6, Issue 1-2; 2006), wrote:

Page (2004) found that 33% of her bisexual sample of 217 participants were involved in a polyamorous relationship, and 54% considered this type of relationship ideal....

(The reference is in the paper's bibliography.)

Pepper Mint has written (on the LovingMore_Polyactive Yahoo group, May 24, 2007): "Kassia Wosick-Correa from UC Irvine has unpublished numbers that peg self-identified polyamorous bisexuals as 44% of all bisexuals."

In 2010 came this European report on preliminary results released from a large study, which found that 40% of bisexuals "consider themselves to be polyamorous." (The full study was to be published in 2011 in the Journal of Bisexuality.)

Kelly Cookson in 2010 provided additional references regarding how many bis are poly, with his brief summary of each:

Burleson (2005). Bi-America: the myths and truths of an invisible minority. Binghamton, NY: Harrington Park Press. In a chapter discussing the relationship between bisexuality and non-monogamy, Burleson claims bi people tend to be non-monogamous more than people of other sexual orientations. I got this from a secondary source: Tameeza, S. (2007) Bi and in love: A phenomenological inquiry into the committed couple relationships of bisexual women. Unpublished doctoral dissertation, California Institute of Integral Studies, San Francisco, CA.

Klesse, C. (2006). "Polyamory and its ‘others’: Contesting the terms of non-monogamy." Sexualities, 9, 565-583. "Although polyamory is not essentially linked to any particular sexual identity, a significant part of the UK polyamory scene seems to consist of bisexuals or – as one of my interview partners3 put it – ‘heteroflexibles’. It is not surprising, therefore, that polyamory emerged as one of the most significant discourses on nonmonogamy used by bisexual-identified participants in my study." p. 566.

Sheff, E. (2005). "Polyamorous women, sexual subjectivity and power." Journal of Contemporary Ethnography, 34, 251-283. "Bisexual women were quite numerous in polyamorous communities. In fact, bisexuality was so common among women in the polyamorous community that they had a standing joke that it allowed them to 'have their Jake and Edith too!'" p. 266.

So there's a lot more available than guesswork! My working assumption from all of this is that roughly 40% of self-identified polys are bisexual, and roughly 40% of bisexuals are poly. But this awaits somebody rounding up all the current research and weighing the numbers intelligently. Thesis project, someone!

This also gets to the perennial question of how many self-identified poly people there are. News media keep quoting the 2009 Newsweek estimate of 500,000 poly households the U.S. But if the crossover percentage in the bi-poly matchup is the same in both directions (whether 40% or anything else), then the number of polys is equal to the number of bisexuals. For which there ought to be good modern numbers.

For instance, if we believe the CDC polling number that 2.6% of 18-to-44-year-olds in the U.S. say they are bi, that would imply there are 3.1 million U.S. polys. At least in terms of preferred relationship style.

Not sure I believe it.

Update, May 10, 2014: Elisabeth Sheff posts on her Psychology Today blog:

The most reasoned estimate of the number of poly people in the U.S. comes from Kelly Cookson, an independent Australian academic who looked at a lot of research and then compared the percent of bisexuals in poly research to the percent bisexuals in a national survey to inform his estimate. In an email interaction, Kelly Cookson summarized his results for me: “It appears that sexually non-monogamous couples in the United States number in the millions. Estimates based on actually trying sexual non-monogamy are around 1.2 to 2.4 million. An estimate based solely on the agreement to allow satellite lovers is around 9.8 million. These millions include poly couples, swinging couples, gay male couples, and other sexually non-monogamous couples.”

This is a great post and some very interesting debate. I hate when I feel one sexual minority is not respecting others. I get that as a gay poly guy, when fellow gay guys act like I'm a "traitor" to their cause of marriage equality. Similarly, I'm baffled at some monogamous bisexuals who act extraordinarily defensive about their monogamous-ness and make a big brouhaha over being a more respectable bisexual than the poly bi's. Oy. Can't we just accept each other and move on?

I have always been a bit leery of the 500,000 number, though they do say "families" which, since poly families can be many different sizes, that the number could be somewhat higher.

But the quote from the oft reported Newsweek article has no specific attribution, unlike a number of assertions in the story which are attributed.

"Researchers are just beginning to study the phenomenon, but the few who do estimate that openly polyamorous families in the United States number more than half a million, with thriving contingents in nearly every major city. "

I think I'll see if I can ping the writer of the article and find out what the basis of that number was....

Yeah - there's a lot of othering in a mainstreaming of a thing. Bisexuals wanting legitimacy will want to identify with all the other social norms in order to liken themselves to the privileged group. Those who fall less in the mold are cast under the bus.

I'm sorry to hear about robert919's experience with the gay community. But I'm not shocked. Political aspects of cultural change can take on really ugly faces and hurt a lot of people on the road to the political victory.

In my experience, my bisexual friends who are monogamous don't tend to be particularly politically aligned, or be engaged in othering - they just don't want to be automatically lumped in with polyamorous people on the basis of a "logical" misconception about how they do relationship

Why the lack of references to bi men? It's not exactly a secret that much of so-called "biphobia" is really homophobia against bisexual men.

And that's in straight society. Within the gay community, "biphobia" is, for the most part, really heterophobia against -- you guessed it -- bisexual men.

I'm a bi man who's been out of the closet for 35 of my 60 years -- the first 15 years as gay. I grew up in New York City and lived in the "gay capital" of San Francisco for 12 years before I settled down in Vermont 19 years ago.

I've been married for six years. My wife (who's heterosexual) and I are both polyamorous (Although at my age, my sharply-reduced libido has rendered me virtually celibate for the past two years).

I've been called "faggot" and other anti-gay epithets while growing up. When I came out bi on my 40th birthday, a lot of gay men in San Fran whom I thought were my friends called me a "traitor" and accused me of engaging in "heterosexual privilege."

Bisexual men are by far the LEAST visible segment of the LGBT "community." Now you have some idea why that is the case; my being out of the closet makes me a minority within a minority.