Slippery slope? The Economist says bring it on!


The news cycle has moved on from the Supreme Court's gay-marriage decisions, but debates continue about whether polygamy will come next, or should. 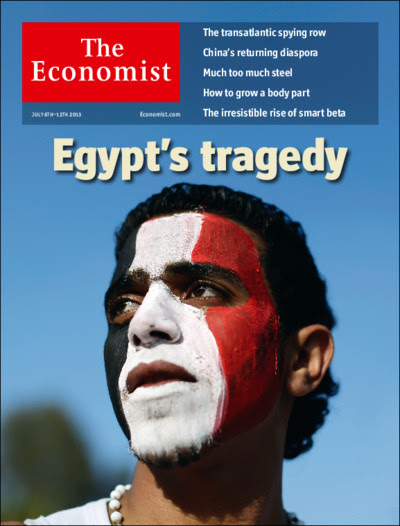 For instance, this surprise at The Economist:

...Same-sex-marriage activists have wisely sought to separate themselves from advocates of even more exotic marital arrangements. However, as Mr Lewis suggests, the idea that marriage is an inherently heterosexual institution is less plausible than the idea that it is inherently exclusive to couples. If a man can love a man, a woman can love a woman and a man. And if they all love each other... well, what's the problem? Refraining from criminalising families based on such unusual patterns of sentiment is less than the least we can do.

Read the whole column (June 28, 2013). The Economist is a thick, highly influential weekly newsmagazine based in the UK with a U.S. circulation of 750,000. It's pretty Tory about economics but has little use for most of the obsessions that pass for conservatism in the U.S.

Or maybe we need an even broader rethinking. Remember the Beyond Marriage statement? The Beyond Same-Sex Marriage organization is now Unmarried Equality, and KIRO Radio in its hometown of Seattle put up this on its news site:

Cindy Butler, the executive director of Unmarried Equality, wants to end the assignment of benefits and privileges based on marital status.

"We want people to stop thinking that a legal marriage is the only legitimate outcome for a committed relationship," she said. "The ruling on the Defense of Marriage Act is starting to redefine what a spouse is."

Butler's group claims that 47 percent of [adult] Americans are unmarried, as of the 2010 census.

"That's 112 million people, so we could be equal at this point. It's definitely growing as a trend and it won't stop," said Butler.

While unmarried partners don't have the same rights as married couples, Butler said the rulings move the national conversation in the right direction. She hopes employers begin granting benefits to unmarried couples....

Among polys themselves, discussions continue about what our reactions and strategies should be. Everyone has their own ideas; agreement on a "party line" would be impossible and a lousy thing in any case. What I do seem to see emerging, though, is a tendency to distrust the privileging of marriage in general — as with Unmarried Equality above — and to argue that, for instance, instead of a small new group being ushered into the family health-insurance privilege, everyone should have access to health care. What poly families really need, many are saying, is public acceptance and understanding, and the state keeping out.

From Robyn Trask's editorial at Loving More, which she directs:

...Overturning DOMA is a step in the right direction and I am thrilled for the many same sex couples that will be positively affected by this decision.

Is it a step toward plural marriage? I am skeptical, as it is a complicated issue and begs the questions should marriage be regulated at all? I know many polyamorists would choose to marry more than one if it were legal, and that, by the laws of some states, many are violating the law since co-habitation is in some states considered common law marriage....

The right to family of choice is really what is at stake, and the same legal protections should extend to people in multi-partnered marriage. Unfortunately too many of us in the polyamory community have been afraid to even bring up the subject; we are still afraid of job discrimination and other issues like child custody. Many people are in the closet and most are not willing to support an effort to demand equality and recognition of polyamory as an orientation and a viable choice in relationships and families. We as a movement are in our infancy with nothing acting as a catalyst to bring us together in a cohesive way.

As my partner and I move forward with our own marriage next week, it is not without trepidation. We do not want to close the door to other loves or committed partners, and we know that the perception for many will be just that....

Jessica Karels of Modern Poly put up a personal statement:

...Opponents to same-sex marriage have used a very specific image of polygamy – one that is wrought with images of cult-like mind control and abuse of women and children – in order to scare people about the consequences of what marriage equality could bring. I propose a second version of the “slippery slope” argument, one that conservatives would find equally scary.

Same-sex marriage, by its very nature, denies the traditional gender roles that are a part of the nuclear family model.... By emphasizing that families are build around love and commitment – rather than who wears the pants and who cares for the kids – we call into question public policies that enforce the status quo.

...Likewise, for same-sex partners to become parents, they need outside aid through a surrogate mother, sperm donor, or a mother giving up their child for adoption. It is not unheard of for all three adults (the couple and the one who biologically intervened… that sounds so clinical!) to co-parent the child. This means that at least one adult in the group is taking an active interest in caring for a child that is not made of their own genetic material… *gasp* What if this type of practice – multiple non-related adults co-parenting – became a cultural norm?

What if it led to social policies where communities actively pooled their resources to ensure that the next generation was fed, clothed, and schooled – instead of leaving the onus solely on the biological parents?

Wes Fenza, a lawyer and part of the Philadelphia quint that was featured on Lisa Ling's "Our America", picks up the hot potato and, at Modern Poly, argues the case for legally recognized multi-marriage:

The Need for Poly Marriage

...A common sentiment in poly communities [is] that poly marriage isn't something to worry about. In fact, even Mistress Matisse, a high-profile polyamory activist, published an article several months ago stating that “poly marriage is never going to happen,” arguing that working out the details would be too complicated and that most poly people don’t even want marriage anyway.

I’ve often run into the argument that poly marriage would be "too complicated" from a legal standpoint. While gay marriage easily fits into the existing marriage framework, marriage among multiple people would require a more complicated legal framework in regard to property, insurance, inheritance, decision-making, and related areas.

...I agree with critics that poly marriage is a long way off, but it is a goal worth pursuing, and will eventually be a key step in recognizing the legitimacy of our relationships.

From Angi Becker Stevens at The Radical Poly Agenda: So, What Does This DOMA Repeal Mean for Us? and Further Thoughts on DOMA and Polyamory.

...I’ve occasionally seen responses from other poly folks that are more along the lines of “everyone should calm down, we’re not interested in marriage right now, anyway.” That might be true, but it’s not really the line I’m interested in taking when it comes to defending the idea of poly marriage....