More Than Two book developments, and other new poly books 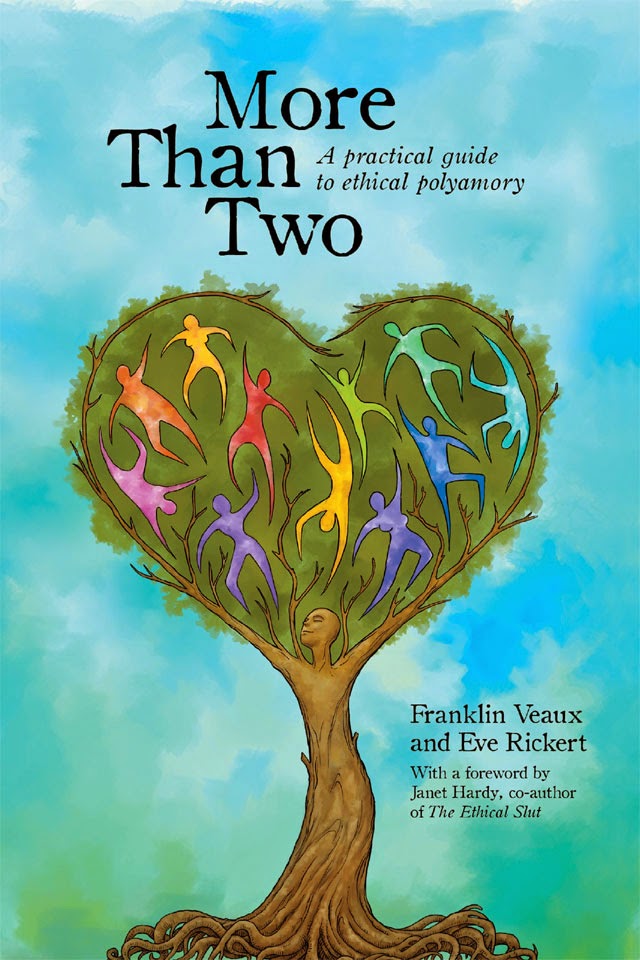 Franklin Veaux and Eve Rickert have just decided to try to run the table with their long-awaited polyamory guidebook, More Than Two. It's now at the printers, and they had scheduled a publication date of May 30th. But after learning some harsh realities about the book industry in the last few weeks, they've moved the date to September 2nd so they have a chance to get it into mainstream bookstores and libraries.

Backers of their Indiegogo campaign will still get copies on schedule, in early to mid-June (paperback if you gave $25 or more, e-book if you gave $15). You can also buy the book "pre-release" at the authors' live events at bookstores and at Atlanta Poly Weekend June 6–8. But if you pre-ordered on Amazon, you'll have to wait.

What they found out is that mainstream bookstores won't accept a new book after its publication date, or if review copies haven't been sent out with a publicity campaign under way, or if the book has been sold electronically. And library book selectors almost never buy a new title unless it has been reviewed in Library Journal or similar trade publications.

Arranging these ducks takes time and insider knowledge. So Eve and Franklin decided to take a scary financial plunge, delay the date three months, and hire a publicist. The date also matches the start of their fall book tour.

You can tell they're a little anxious how fans will react:

And here's their blog post: Book update: Publication and pre-release dates (May 18, 2014).

They agonized about this decision, especially the delayed cash flow (Amazon doesn't charge your credit card until a pre-order ships). But they feel the book has a chance to break out of the poly community into the mainstream.

I helped edit the book, and I agree. I see it as the first poly guidebook that's aimed at today's "second wave" of interested people, as Franklin describes them. The first wave were the visionaries, radicals and social creatives who built the poly movement. The second wave are the more mainstream people encountering the subject by seeing it in the media, and they come with different assumptions. Franklin wrote,

People in their 30s and above who are coming into polyamory because they've seen it on TV or heard about it from talk radio, but whose experience is only with monogamy, are "second wave" poly. They're largely all about hierarchy and rules; a lot of these folks I see come to poly from a place of deep fear and suspicion; they like the idea of having multiple partners, but only if it's not uncomfortable or threatening.

So it's a very practical book, with little theory or advocacy and no woo. At 480 pages, it packages the knowledge of what is likely to work or fail, and why, that the poly community has accumulated over the years, and delivers it in a form that speaks to average people as well as to relationship radicals. I'd say they got the timing just right.

Update June 29: Beware of fake download scams. Scammers fill the internet with fake offers of cheap or free e-books, and they've added More Than Two's title to their bait in the water. I guess that's a sign of its online buzz. Don't get took, don't get malwared.


In other poly book news...

● Cunning Minx of the Polyamory Weekly podcast (now in Episode #392!) has just come out with a short e-book, Eight Things I Wish I’d Known About Polyamory (Before I Tried It and Frakked It Up). It's 17,000 words and about 66 pages, and is based on a class that she gives with the same title.

As early listeners to Poly Weekly will remember, her early tries at poly relationshipping blew up in distressing ways before she developed her current family of three. And in fact, her mistakes were perfect examples of central themes in Franklin and Eve's book. Click the book cover here to read the introduction and first chapter.

● In the U.K., self-help trainer and author Roger King has come out with Warrior Love in a Changing World. He describes his own odyssey into poly and argues, "We could learn to be in an even more abundant love with our main partner, if we gave each other authentic responsible freedom to love more than just ourselves." From the press release (May 15, 2014):

King... encourages readers to be honest with themselves and their partners, to become what he refers to as “warriors of love.”

“Could humanity make a paradigm shift and add to monogamy the ability of being polyamorous?” King asks. “Could we ‘come out’ and experience being honestly in love with more than one person at the same time? Could men especially be more open and honest? We are living longer, we change, our partner changes. As personal growth permeates societies, will open relationships become more the norm? Or will monogamy keep us tied to meeting our changing needs secretly?”

Speaking as a librarian, the best way to get librarians to order books by self- and small publishers is to take out other books on the topic and/or order the book through Inter-Library Loan. In some cases, online catalogs have a "Request a Title" feature for books that haven't come out yet, which help librarians decide on future purchases. Books that are requested enough will likely to recommended for purchase. Y(library)MMV, so ask your librarian what would be the best way to get the book, and others like it, into your system. If I didn't know about polyamory but noticed that a lot of my patrons are taking out Sex at Dawn, I'm pretty sure a GOOD Google search would get me to your site.

Oh, and you can also purchase a new copy and ask for it to be put into the system, but you should ask them about how they deal with donations first. Some places will only put donated books in a book sale, depending on purchase policies.