"Is Poly Next? Future marriage equality frontier may be harder"


For media running features on local poly people, the news hook has become the marriage question. Even though it's not high on most polyfolks' agendas. Think acceptance and nondiscrimination instead.

Corvallis, Oregon (between Portland and Eugene) awakes this morning to find this on display as the cover of the local alternative weekly paper: 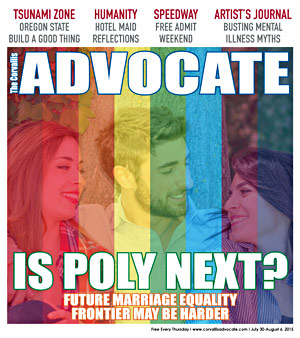 Redefining Marriage: Polyamory May Be Next

Polyamory has been gaining publicity over the last few years, from Newsweek’s “Polyamory: The Next Sexual Revolution?” to Neil Gaiman and Amanda Palmer’s open marriage, to Benedict Smith’s article in VICE about growing up in a polyamorous household. The recent Supreme Court decision to legalize same-sex marriage opened floodgates of alarmed and snarky speculation from detractors about whether it sets a precedent for the legalization of polyamorous marriages, and the Internet has largely responded in the affirmative. And there is a growing community of polyamorous people in the Pacific Northwest — including here in Corvallis — many of whom want legal recognition of their relationships and are considering what legal polyamorous marriage might look like.

One local man, Mike, is currently in a relationship with two long-term partners and one new partner. He said, “The subject of marriage often comes up when thinking about legal issues. Emotionally, I consider both of my long-term partners wives but legally I am only allowed to marry one of them. This has caused some emotional distress.”

Currently polyamorous people have a few legal options open to them: distribution of property can be assigned through wills and trusts; more than one person can be given power of attorney for medical decisions. But only one, legally married spouse can participate in the other spouse’s insurance coverage, and insurance companies would almost certainly oppose expanding coverage to an indefinite number of partners.

Additionally, custody arrangements might be complicated if children are involved, and polyamorous parents are disadvantaged in a number of ways....

...Perhaps a first step for polyamory activism would be to fight for anti-discrimination laws. Besides facing alienation from some resources monogamous people have access to (it can be very hard, for instance, to find a relationship counsellor who is willing to counsel a poly couple), poly people face discrimination because polyamory is not a protected class. There is disagreement, even among polyamorous people, about whether polyamory is a lifestyle choice or a more fundamental identification....