"Polyamory: taboo for religious Americans but not for the rest"


That's the headline with which YouGov announced its polyamory-acceptance polling results today. The first part of the headline is no surprise, but the second part might be. From the announcement:

Polygamy has long been prohibited and rarely practised in the United States.... What is increasingly common in the United States, however, are various forms of 'polyamory', where people have multiple sexual and romantic partners with the full knowledge of their partners. 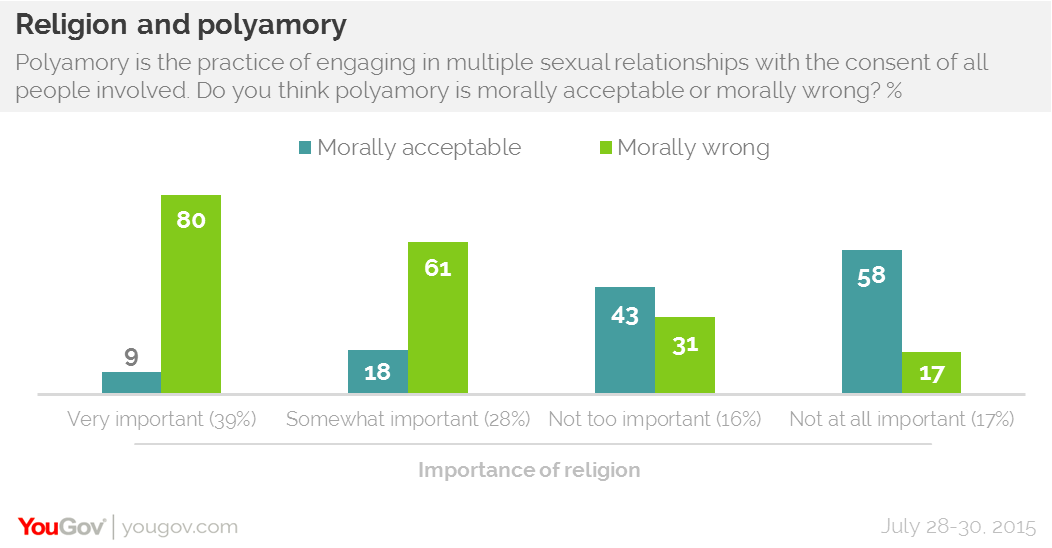 – Men were more than twice as likely as women to say that polyamory is morally acceptable.

– Democrats and independents were equally accepting; Republicans less so.

– The Northeast, Midwest, and West were equally accepting; the South only a little less so.

– Whites were twice as likely to be accepting as Blacks or Hispanics.

– Polygamy is viewed much more negatively than polyamory.

How reliable is all this? Unlike most polling firms, YouGov doesn't try to assemble a representative random sample of a population. To get polled by YouGov, you have to join the YouGov "community" online. You win perks if you answer surveys they email you, on all kinds of topics. Says Wikipedia,

The company’s methodology involves obtaining responses from an invited group of internet users, and then weighing these responses in line with demographic information. It draws these demographically-representative samples from a panel of 3 million people worldwide including over 600,000 people in the UK [where YouGov is based].

YouGov claims that its weighting algorithms make it at least as accurate as conventional polling. Nate Silver of FiveThirtyEight found that it did about average among polling firms in predicting the 2012 presidential election. Silver says internet polling in general has become about as reliable as phone polling, which has sample-bias problems of its own.

Aside from such systematic errors, YouGov's polyamory-attitudes poll in the US used 1000 responders for a statistical margin of error of ±4.4%.