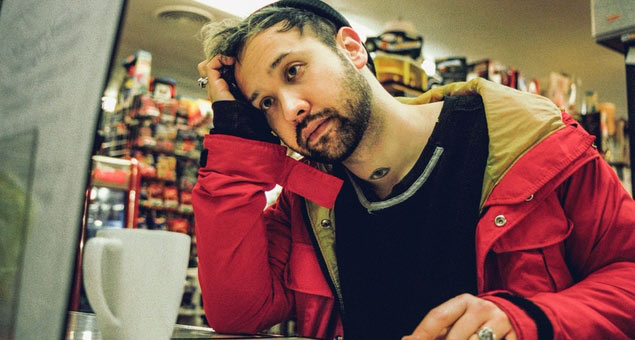 Ruban Neilson continues to draw attention with his album Multi-Love, which, he says, grew from his awe-inspiring, scary year in a triad. On Wednesday night (August 12-13) he appeared on NBC's Late Night with Seth Meyers (heir to David Letterman) and sang the title track. As Consequences of Sound described,

Polyamory is an uneasy topic for some folks, but not so much for Ruban Nielson of Unknown Mortal Orchestra. He made it a key topic in the band’s latest release, Multi-Love. Last night, he brought the topic to a national audience with a performance on Seth Meyers. Nielson tried to make the crowd as comfortable as possible by taking a relaxed position up on a giant white piano while he sang the album’s title track.

Lyrics. Musically, I don't think it's the most interesting song on the album.

Here's a selection from the many reviews, interviews and stories since my last roundup.

Not long ago, New Zealand-born Nielson embarked on a three-way relationship between himself, his wife Jenny and a young woman whom the music website dubbed “Laura”. The couple and their two children had moved out of a yurt and into a permanent residence and invited Laura to stay with them after a period of exchanging increasingly romantic emails. The three had a polyamorous love-in for the next year, until visa issues prevented Laura from extending her stay.

...Despite his laidback demeanor, his complicated love life looms like the elephant in the room. I want to ask more about what happened, how he fell in love with two women at the same time and, I’ll be honest, who slept where. To the cynical it sounds like life imitating Portlandia. But Nielson is still dealing with the very real emotional fallout.

“It’s hard …”, he begins, half-tired of fielding questions about it, half-nervous about what he might answer. Laura isn’t talking to him after the article was published last month. “It’s in a weird space at the moment,” he says of how they left things. “She’s really pissed at me right now; she’s never really had to deal with media [before].” Despite shooting the album’s cover, a shot of Nielson’s studio with a distinctive pink glow, Nielson suggests that Laura was taken aback by how, as a line of the titular track goes: “It’s not that this song’s about her / most songs are about her”. “I think she was just a bit shocked at how much of ...” – he catches himself and changes tack – “how important the album was to me”.

...Is she annoyed that he’s exploited their anomalous experiences for his own creative ends? “Yeah, maybe,” says Nielson, tentatively. “The way things happened might have made her feel that way, but that’s not really what happened. Maybe it’s a betrayal that I’m still talking about it to the press, I don’t know. I can’t tell what I’m supposed to keep private now, or what’s my responsibility to the people who listen to my records.”

...Nielson liked the idea of “a hip-hop DJ being able to play Kanye and then my song without it feeling like a total seismic shift”, but the truth is that UMO’s music has its own wooze-vision. And not just because Nielson tends to spiral off into theories about the universe and holograms. Multi-Love’s production is dense, burbling with an unhinged, squelchy pressure that could only come from escaping the stress of a three-way relationship in a basement studio stacked with old synths in the middle of the night. Multi-coloured parts bound in and out of focus like neon flubber, or else are muffled like a dusty, well-loved Otis Redding record lurking at the back of your bookcase. His style has caught the ear of Frank Ocean and Chet Faker, both of whom Nielson is said to be working with.

For now, however, Nielson is content to be UMO’s ringleader and shape them into one of the must-see live acts this summer.


● From a long interview in Australia's FasterLouder: Unknown Mortal Orchestra on Prince, Pitchfork and polyamory (June 2)

...I wasn’t going to talk about it. And then when David — the journalist who wrote the Pitchfork piece — came out and hung at my house for three days. At one point he laid it out that he had figured it out, because he had got so deep into the record and he had done some research he had figured it out on his own and he was basically like, “Let me tell the story because if you trust me and think I’m a good journalist it will be better if I present it than if it ends up on Tumblr”.... It kind of forced my hand a little to be honest. But David was so respectful about it....

It was always going to become increasingly difficult not to talk about it – because you could already see people picking apart the lyrics and pushing you to give a reason for what this record is about.

Yeah that’s the other thing about it. The record becomes sort of confusing and unnecessarily obscure if you don’t know some of the things that went into it.

● In the New Zealand Herald, where Ruban is from: Album review: Unknown Mortal Orchestra, Multi-Love (June 4).

Once you know the story about Unknown Mortal Orchestra frontman Ruban Nielson's experience with polyamory while this album was in creation, it's hard to forget. Except if you'd never heard about it, it's entirely possible that you could listen to Multi-Love and never have any inkling of that story, because though that experience infused Nielson's outlook and writing, and gave the album its title, this isn't an album about polyamory.

It's an album about the confusion of love and life, of emotions, endless questions, and a search for contentment....

● When it was released on May 26, Spin made it their album of the week.

The glimpse into Ruban Nielson's studio that adorns the cover of Unknown Mortal Orchestra's third record, speaks volumes about what is contained within the album. Analog consoles and tape reels stand out among a variety of instruments and knick-knacks, but all of it is cast in darkness.... But this gloomy chamber of reflection is being invaded by an amorphous, psychedelic blob coming out of the ceiling. Its purple-orange hue is cast across the room, providing relief to the melancholic spirit of the room. It is this feeling that Nielson uses to set the stage of Multi-Love's cathartic and complex examination of polyamory.

● In Flavorwire: An Unflinchingly Honest Account of a Polyamorous Relationship (May 26)

In addition to being one of the year’s best psychedelic records, Multi-Love may just be the first album to honestly explore the complications of an increasingly common relationship arrangement that remains both fetishized and taboo....

As Pitchfork notes in a recent profile, Nielson said one pal responded to his admittance of the three-way relationship with the following comment: “That’s rad, man. Maybe you can go to bed with both of them.” Instead, Nielson bristled and told his friend, “I wish I wasn’t in this emotionally terrifying situation.”

“Think about the two most serious relationships in your life so far, and then experiencing them simultaneously,” Nielson offered as an explanation. “It makes you wonder: How much can a human being deal with emotionally? How well-adjusted are you?”

Q: The album art for Multi-Love is a photo of your pink-lit basement — I wanted to know the story behind the two skulls on the shelf.

● In the Salt Lake Tribune, while on tour: Unknown Mortal Orchestra grapples with overwhelming weight of love (July 26).


New video for the album's "Ur Life One Night":