Three men in Halifax, Nova Scotia, two of whom dissolved their marriage in order to "remarry" on equal terms with the third, went exceedingly public today in several lowbrow British newspapers, which wrote them up in happy terms. Sisters of the three have volunteered to donate eggs and be surrogate mothers for the children they hope to have.

It ran with a cheery long story in the tabloid Mirror:

Sebastian, 29, said: "We definitely see kids in our future. We would love to have three children altogether of our own genetics if possible and we have a plan on how we're going to make that happen.

"We have really supportive family and friends around us who want to help us conceive.

"Shayne has two sisters who have offered to carry our children for us and my sister will hopefully donate her eggs too."

Adam and Shayne met in 2009 and the pair got married two and a half years later.

After a year of wedded life, they met Sebastian in a nightclub in September 2012 and immediately hit it off.

And last year, Adam and Shayne got divorced so that Seb could be properly included in their arrangement.

Medical Administration student, Shayne, 29, said: "We're the happiest we've ever been — all our dynamics and personalities work so well in a relationship.

"The three of us bring out the best in each other.

Nursing student, Adam, 27, added: "We didn't want Sebastian to be excluded or feel like the third wheel in our relationship. So Shayne and I decided to get a divorce so that we could make a renewed commitment between the three of us instead.

"We want to make sure that we're all equally bound and obligated to each other in marriage."

..."Sebastian was different to anyone we had ever met. There was something about him that Shayne and I couldn't explain, but it was like meeting our life partner for the second time."...

...The trio have been living together for over three years now and are happier than ever.

And they hope to marry in the not too distant future.

Adam said: "Although being married to more than one person is not yet legal, we have spoken lawyers who can draw up paperwork to make sure we are equally bound and obligated to each other in the eyes of the law."

The trio hope to show that polyamory is a perfectly acceptable choice of life and love.

Adam said: "We just want to say that love is love. It should be multiplied not divided. It shouldn't matter if you're in a three-way or a four-way relationship."


The Daily Mail ran the same story, but with lots more pictures including these: 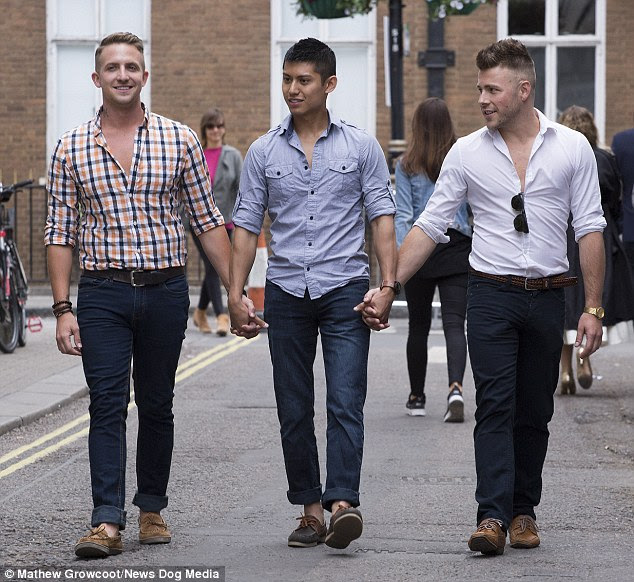 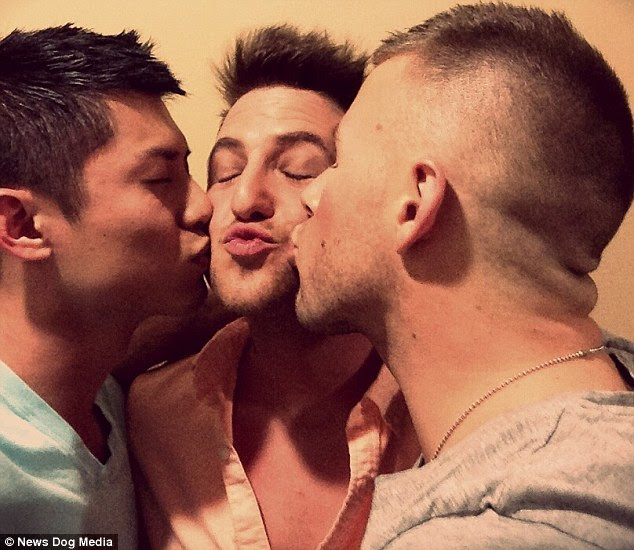 And in the free-on-mass-transit Metro: Three male nurses are now planning to take their polyamorous relationship to the next level by having children together (Oct. 15).

Update: A reprint on Australia's SBS, in which a poly writer challenges gays on their own expressions of mononormative fear and prejudice: If love is love, why exclude the polyamorous? "The consequence of a ‘gay equality’ movement that has become so narrowly focused on marriage is that we’re sacrificing anyone who gets in the way." (Oct. 30).