The poly movement gets wide cred for the relationship insights it offers everyone. Part 1. 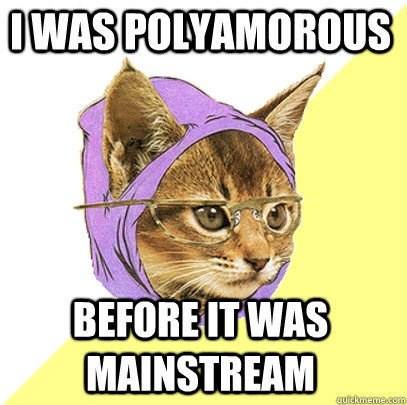 I've been saving up poly-in-the-news of a particular kind: articles that treat our movement as a broad social advance for the lessons it offers people in any kind of relationship. I've done two data dumps of such articles in the last year or so (#1, #2). It's way past time for another.

Here are excerpts. Click the titles for the full stories.

Polyamory has helped me rethink some of my unhealthy and unrealistic ideas about relationships.

...But to the surprise of some of my friends, I came out of that crappy poly relationship not swearing off open relationships, but instead identifying as polyamorous.... I realized that polyamorous relationships, just like monogamous ones, could be healthy or unhealthy.... Polyamory itself actually forced me to mature and re-examine my views about relationships in a way that worked well for me.... [It] was key to realizing these elements of healthy relationships:

1. Discuss Rather Than Assume Boundaries

Equally important are assumptions about your relationship with each other. For example, I have had a couple of relationships that were barely or not at all sexual. They were definitely romantic, since I had an emotional connection, we cuddled and kissed, and we went out on dates. But one or both of us weren’t interested in sex, and we communicated about it....

Communication, including discussing and setting boundaries, is emphasized in most polyamorous resources, and by much of the poly community. Growing up I saw virtually no healthy models for this....

Throughout my childhood and adolescent years, I absorbed the idea that healthy relationships are effortless. You shouldn’t have to talk about anything, and if you and your partner disagree, well, either someone has made a mistake and needs to fix it, or else the relationship is doomed.

My college boyfriend, even though he identified as polyamorous, agreed with this sentiment. He told me that he believed he shouldn’t have to compromise, that if he had to put in work it must be a crappy relationship.

Through dating him, I realized that we had bought into a mainstream myth that relationships should be easy. Now I recognize that they aren’t necessarily supposed to be “easy”; they’re supposed to be worthwhile and fulfilling. There’s a difference between a relationship where you put in all the effort and compromise and end up feeling drained, and a relationship where you both put in effort and sometimes compromise while sticking to your core values and valuing yourself, and you feel loved, fulfilled, and satisfied.

3. Don’t Expect One Person to be Everything

Dating multiple people at once helped me break down this idea in a way that serial monogamy wouldn’t have....

If you think polyamory might be a good fit for you, you could end up learning a lot about yourself and about relationships by trying it, if only because you’re approaching things from a different perspective....

● Last week on Newsy: a flip piece with a lot of couple-assumption, but what a positive attitude: The More, The Merrier? The Perks Of Being Polyamorous (December 18, 2015). With video (warning, it autoplays).

Some experts say having a sexual partner outside of a committed relationship allows for more honest communication among those involved.

Did you know we're in a sexual revolution? Well, strap up, soldier. You actually may need to since we're talking about satisfying the needs of several sexual partners.

At the forefront of this revolution: Polyamory, where men and women are seen as equals and are romantically involved with multiple people with the consent of all parties involved.

"We all want to do it and are interested in it and are excited about it, and yet we place so many restrictions," Dr. Zhana Vrangalova said....

For one, some psychologists say when a couple brings in an outsider it forces all involved to be more open and honest, and it allows them to communicate their feelings and desires further.

And if you're at home screaming at the screen saying, "Hell, no! Everyone else can keep their hands off my man!" some therapists say polyamory could help with that type of jealousy.

That's because polyamorous couples get jealous, too, but they tend to learn and discuss boundaries much more than other couples to identify those triggers. It's a messy, meticulous management of emotions.

And health-wise, it could be safer. The Journal of Sexual Medicine found individuals who had permission to sleep with someone else were more likely to use condoms than those who were "cheating."

Some have even gone on to call it "the new monogamy....

But before you think it's all foreplay and three-ways, experts say polyamorous relationships are more complicated, high-maintenance and potentially painful than being a conventional couple. So, think twice before it turns into a thrice.


● This thoughtful piece first appeared on Connections.Mic and has been reprinted several places: 4 Lessons Even a Serial Monogamist Can Learn From Polyamory (July 24, 2015).

...My brief foray into the world of polyamory did not convince me to give up on monogamy. But it did prompt the question: If I was the only one in this relationship who felt miserable... What could I learn from them?

I decided to dive in for answers, attending meetups and talking to couples and individuals within the poly community....
I discovered that we can all learn something from the honesty and emotional intelligence required to open our hearts and our lives to love (or, in this case, loves).

1. Jealousy is not caused by others. It comes from within. With social media injecting itself into every corner of our romantic lives, jealousy triggers abound.... It helps to ask yourself, "What am I really feeling that's making me experience jealousy?"

..."Let jealousy be your teacher," author Deborah Anapol suggests in Love Without Limits. "Jealousy can lead you to the very places where you need healing."

2. Don't expect your relationship to always stay the same. Your partner is constantly changing, and so are you. A lasting relationship requires a constant willingness to address change within ourselves and each other. It's a good thing that we're always growing, and if that means growing apart, then honesty and openness will hopefully help us cope with that shift.

3. One person will never check all the boxes.... I love to be outdoors, but a previous partner of mine preferred air conditioning.... Filmmaker Julia Maryanska, who is currently working on a documentary about alternative models for relationships, told me that I was being unrealistic....

4. It's OK to keep an open mind when defining your relationship. The rise of polyamory might make dating more complicated, but it also has a clear upside: We're seeing more and more examples of alternative approaches to love and dating.

Polyamory doesn't work for everyone. It didn't work for me. But if we can't share lovers....

● Just up Monday on the men's magazine Maxim: Are Non-Monogamous Couples Happier? (December 21, 2015):

They've got more traditional couples beat in one key area.

...More Americans than ever are accepting of the practice (although a majority still oppose it) and psychologists estimate that up to 5% of Americans are in consensual, poly relationships.

This is potentially for good reason. A recent study published in The Archives of Sexual Behavior... compared "mate retention behaviors" between monogamous and consensually non-monogamous (CNM) couples. [It] discovered that when it came to satisfaction with the primary partner, both types of relationships reported equal levels of happiness. But non-monogamous couples did express a notable difference in one key area: communication.

According to the study, "...Monogamous participants reported less satisfaction with the amount of communication and openness they had with their partner compared to CNM participants’ reports of their primary partner."... Polyamorous couples tend to be more open and sharing....

Another study this year, from The Canadian Journal of Human Sexuality, shows that casual sex relationships, or friends with benefits, reported equal (if not greater) satisfaction with their relationship than married couples....

● On Bustle: 5 Ways Non-Monogamy Can Strengthen A Relationship, If You're Looking To Explore Something New (July 29, 2015).

...If you're satisfied with one partner, that's great, but for the rest of us who can't work within the system, there are ways to engage in consensual non-monogamy that can be awesome for your relationship....

1. It Encourages Communication. Strong, silent types need not apply to the consensual non-monogamy game. If you and your partner(s) want to remove some of the restrictions in your relationship, you'll need to be totally dialed in to an open dialogue at all times. Secrets and lies are for cheaters, thank you very much.

2. It Forces You To Focus On Your Individual Desires. It's common knowledge that losing yourself in a conventional relationship doesn't help you or your partner....

3. It Allows You To Bring New Experiences To The Table. Opening up your relationship means you can share some of the electric new experiences you're having....

5. It Makes You Appreciate Your Partner For Who They Are. Comparing your significant other to someone else is supposedly the worst thing you can do, according to experts. However, when your partnership allows you to experience other people in the flesh, it can help you stop fetishizing what you don't have, and start appreciating what you do.

● That article probably did well for Bustle, because it soon followed up with this: 36 Polyamorous People Share Their Best Relationship Advice, Because Even If You're Monogamous There's A Lot To Learn (Aug. 19).

I reached out to a couple of polyamorous communities to see what lessons they think monogamous people could learn from polyamorous people in order to make relationshipping just a little bit easier....

● On RoleReboot: Why Having A Lover Makes Me A Better Wife (July 23):

...He brings toe-curling excitement to my life and I get to turn around and bring that high-octane sexual energy back home to my husband. Everyone wins.

Polyamory and non-monogamy seem to be all the rage these days. Everyone is talking about the fun new forms relationships can take and the excitement that comes from doing something non-traditional and edgy. But very few articles I’ve read explain exactly why having a relationship with someone other than your husband or wife may actually help you be a better wife or husband....

So why do I gleefully indulge in these occasional overnight romps with Jay instead of sticking to the model of monogamy most of my 40-something friends desperately embrace while quietly withering inside?

...When Austin and I first started exploring the idea of opening up our relationship to include additional lovers, we had to do an extraordinary amount of additional communicating. We had to try extra hard to make sure we were actively listening, holding each other in compassion, and seeking what was best for our relationship....

...As the saying goes, I was poly when poly wasn’t cool.

The article was also reprinted on Alternet (Sept. 3).


● On the Dating Skills Review podcast, sociologist Elisabeth Sheff (author of The Polyamorists Next Door and editor of the anthology Stories From the Polycule) talks about importing relationship skills from others: Successful Polyamory Strategies (that Can Make Monogamy Better Too). From the host:

In the text, an index divides the 64-minute podcast into 19 topics with time markers.

A good analysis of polyamory from an anthropologist: https://www.youtube.com/watch?v=_Hf0OHwEEMU