You Me Her: a "polyromantic comedy" debuts March 22 on Audience Network 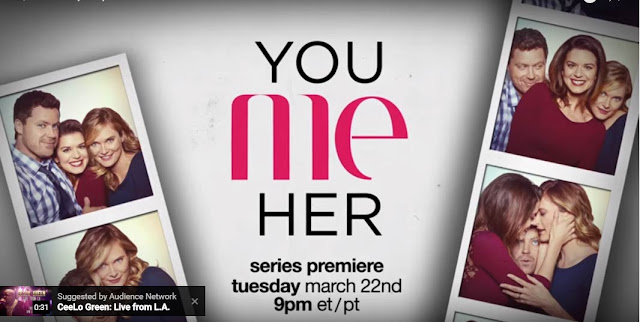 On Tuesday March 22, DirecTV's Audience Network will begin airing You Me Her, which it describes as a "polyromantic comedy" about a couple who open their relationship. They each hire the same sex worker, and then all three fall in love.

Ten 30-minute episodes have already been filmed. The IMDB description:

What begins as an impulsive "date" between suburban husband Jack and neophyte escort Izzy, spins into a whirlwind three-way sexual affair including Jack's wife Emma, whose been keeping secrets of her own. Over a span of just 10 days, their "arrangement" breaks free of its financial bonds to become something else entirely: A real romance, with real stakes, involving three real people, confronting viewers with the compelling question: What if your best, truest, happiest life looked nothing like you thought it would? Would you be brave enough to live it?

You Me Her was created by John Scott Shepherd who will serve as the executive producer and showrunner. The 10-episode comedy draws its inspiration from a Playboy Magazine article “Sugar on Top” by John H. Richardson. It will center on the complex dealings and interactions of a group of individuals involved in a three-way relationship.

The Movie Box calls it

...a new original comedy series about a suburban married couple flirting with the idea of having a polyamorous relationship.

Greg Poehler (brother of comedian Amy Poehler, and the former star/creator of the sitcom "Welcome to Sweden") plays Jack, a sexually frustrated family man who pays an escort (Rookie Blue's Priscilla Faia) to sleep with him. Feeling ashamed, he confesses his one-night affair to his wife, Emma (Fargo's Rachel Blanchard).

Fearing his marriage might be over, Jack is shocked to learn that Emma didn't hire a divorce lawyer, but instead has gone out and hired that same female escort to start her own sexual affair. It creates an unusual situation where they must have an honest and candid conversation about turning their marriage into an open relationship with a third partner.

Does anybody know more? I'm told that the show is featured in the March 7–20 print issue of TV Guide, page 12, but that is not (yet) online.

DirecTV calls the show its "Answer to the Modern RomCom." It will air Tuesdays at 9 p.m. ET/PT. Audience Network is available on DirecTV and U-verse TV, as well as online.

Anyone who watches it, can you report what you think? Post here in the comments, or email me at alan7388 (at) gmail.com. Thanks!

Polyamory Dramedy Produced By Adam Shankman In Works At NBC

In Love, Sex And Neighbors, when a fresh-faced, traditional-values couple moves to Orange County [CA], they discover that the parents at their kids’ school are experimenting with polyamory. The one-hour dramedy, written/executive produced by [Gail] Gilchriest, follows four families at the forefront of a quiet revolution in the way everyday people live and love.


Googling finds me nothing about it since then. Does anyone have inside knowledge?

Labels: TV, You Me Her

Have no info on the NBC show, but there was a fun discussion this morning on the Today Show of polyamory as a real thing as they discussed You Me Her with its star, Greg Poehler. What I want to know is how I can see that show on DireTV's Audence Network, not being a DirecTV customer.

PS. Here is the link to the Today Show poly conversation.
http://www.today.com/video/greg-poehler-i-had-to-sign-a-nudity-rider-for-you-me-her-649075267753

I got to see the first two episodes at SXSW and ask the writer a few questions. I just published my review on my blog, here:

Since the review is licensed under the Creative Commons, feel free to reprint some or all of it here or elsewhere on the poly blogosphere.

RE:YouMeHer
I find this idea for a show more of a bad joke than a comedy. In the real world, love doesn't survive this kind of relationship. Three is definitely a crowd. Of course, the idea, rather, fantasy lives on. So, goes on the continued degradation of our culture.

I didn't like it. It would have been better if the girls were not involved.

Shows like this paint a very inaccurate picture of polyamory. It's not a "solution" for a failed relationship and it doesn't magically evolve out of cheating. It's a lifestyle that should be enthusiastically chosen by all parties involved because it brings it's own challenges that are completely absent in monogamy. Still waiting for a show that is actually representative of people like myself and my partners.

My wife and I went into poly after she had an affair. It saved our marriage

My husband and I love this show. Hate that it's only 30 minute episodes. Wold like to find someone in this lifestyle to talk with.