Now on Showtime: "The 'Shameless' Polyamorous Throuple Next Door"


Remember the poly plot developments as Showtime's Shameless came to the end of Season 6 last spring?

Turns out those were teasers for what's coming in Season 7, starting tonight (October 2) at 9.

The 'Shameless' Polyamorous Throuple Next Door

Showtime's family comedy, "Shameless," has quietly been one of the most boundary pushing shows on premium cable, especially when it comes to sex and relationships. The Gallaghers and their extended chosen family of friends are some of the queerest to ever exist, with Ian's coming out and subsequent relationships with men, Monica's leaving Frank for a butch trucker and then later a pixie-haired woman she met while institutionalized, and Debbie's willingness to feign interest in a woman dying of cancer in order to try and seduce her rich husband....

Season 7, premiering Sunday on Showtime, will expand on the notions of love and family with the throuple that they established at the latter half of season 6....

Polyamorous relationships are still taboo on television with little exploration given to the idea that three (or more) people can be involved romantically and sexually. But on a show like "Shameless," it's almost commonplace for an interracial couple (Kevin and Veronica, or Kev and V to those who know them well) to be partnered parents who then bring Svetlana, a Russian prostitute, to live with them after V marries Svetlana so she can stay in the country. Oh, and they have three babies to raise among them.... A modern family, indeed.

Series regular Shanola Hampton was not thrilled about the idea at first.

"I hated it, to be honest with you," she said. "I felt like Kevin and Veronica had been the stability throughout the show.... So when I saw that that love was sort of being divided or going some place else — wait a minute? Is that true for these characters? I don't know that that's right to me."

It was after she found a way to see how Veronica's love for Kevin wasn't diminished by their mutual relationship with Svetlana that she came to embrace the storyline.

"It's such an interesting dynamic between the three of us," Goreshter added....

When season 7 returns, there appears to be a harmonious hum in the threesome's household. They take turns with chores (in all senses of the word) and work together at their dive bar, The Alibi. But the actresses tease that things won't stay sane for long.

...And then this way it's like we're all married, so 'Why didn't we have this conversation?' And sometimes it comes up the other way where Kevin and Veronica agree on something, and Svetlana is like 'Wait a minute — we're supposed to be in a marriage, and we discuss and go through everything, but now you're not discussing this with me?'" Hampton said. "So yeah, a lot of that does come up in the dynamic of being with multiple partners."

..."That moment where they're having a beer in bed, and Svetlana is smoking a cigarette, and of all people, Veronica was asking this Russian whore ... how to be a good parent and how to love her child, and that's when I think that you started to see the walls break down for Veronica—because it's hard for her to accept anyone in her life."

...On most shows that depict polyamory (most recently ABC's "Mistresses" and Audience Network's "You Me Her"), the drama comes from... the deceit, the cheating, the lying that most people assume will ultimately push a polyamorous partnership to implode. But on "Shameless," it appears the threat comes in the form of a "mysterious visitor" who will clue viewers into Svetlana's past....


● In the Hollywood Reporter:

The Surprising Way 'Shameless' Will Tackle Polyamory in Season 7

“Polyamory is being shown in a way that hasn't been shown on television before,” star Shanola Hampton says as THR talks to all parties involved, including executive producer Nancy Pimental. 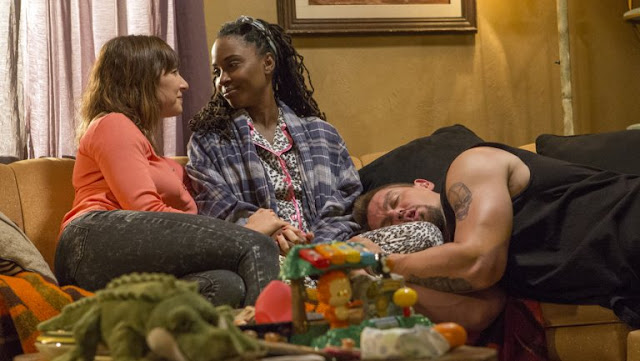 Polyamory may be the most normal thing to happen to Showtime's Shameless.

In season seven of the Showtime dramedy, Kevin (Steve Howey), Veronica (Shanola Hampton) and Svetlana (Isidora Goreshter) will evolve their “thrupple” from a string of threesomes and a green-card marriage into one big happy family that includes working and raising kids together as the John Wells-produced series explores polyamory.

“Polyamory is being shown in a way that hasn't been shown on television before. It's not Big Love, where the poly aspect was all it’s about,” Hampton tells The Hollywood Reporter. “[Veronica] fell in love with a woman and her husband loved her enough to accept this relationship and add it to their own relationship. For her to make that choice, it wasn't to make it temporary — this is her new life and new family”

Adds Goreshter: "It evolved in such a slow, natural way between them, over a period of [season six], where Svetlana really integrated into their lives. It was this weird slow build so it didn't feel like, ‘Oh, we're polyamorous now.’”

Pimental credits the natural flow of the thrupple to the chemistry of the actors and the fact that the storyline happened organically. “We did not set out to have this happen. It originated when Kev and Vee had broken off and Svetlana needed a place to stay," she says.

...Although sex remains a large part of their storyline — including what the cast previews as a “giddy up” punishment scene — it’s not the focal point of their story or the series as a whole.

“Now you've gotten past the whole sex stuff, you just see them just doing the day-to-day,” Hampton previews of season seven, which kicks off Sunday. “It picks up with them doing their schedule — who's going to the bar to work, who's taking care of the kids, who’s doing breakfast, and yes, who’s having sex — and being a regular family.”

Notes Goreshter: “It's like a beautiful dance that's been choreographed, and they all work so well together. Our polyamory is not the focal point of Shameless or our storyline. It’s not thrown in your face; it's just a backdrop to our real life. It’s just there and it’s working.”

The level of love between the trio may also be directly correlated to how much they actually need one another. “It’s really hard to raise kids and have a career, so if you find another part of your tribe or another member of the village that can contribute and there's love and trust and good specs, it kind of just makes sense,” Pimental says. “I think that helps normalize it as well. It started off as a relationship out of convenience and mutual give and take of services and needs being met, and then grew into something more loving.”...

...After all of the crazy things that Shameless has gotten away with — including Frank (William H. Macy) having sex with a woman after her heart stopped, Fiona (Emmy Rossum) accidentally giving her youngest brother cocaine as well as Kev and Vee playing out a slave owner and slave sex scene — the cast jokes that this is the tamest storyline of their time on the show....