From Future Sex: "Are millennials better at free love?"


Emily Witt's book Future Sex: A New Kind of Free Love has been out for a couple months and has had a lot of buzz. You may remember the October New York Times review I quoted, with this paragraph:

There is very little darkness in what is probably Witt’s best chapter, a deep dive into polyamory in San Francisco. By the time she arrives in the city... it’s a playground for successful, bright-eyed young adults [with an ethic of frank openness.] At first, Witt isn’t sure what to make of their sexual appetites. “Their sex lives were impossible to fathom,” she observes, “because they seemed never to have lived in darkness.”

This morning's Guardian reprints much of that chapter. A precis:

Sex in Silicon Valley: Are millennials better at free love?

‘Despite making rules, they would aim to fail: a concept they borrowed from computer security.’ 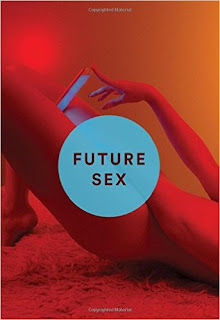 ...By 2012, the young people who came to San Francisco were neither dropouts nor misfits. They were children who had grown up eating sugar-free cereal, swaddled in polar fleece jackets made from recycled plastic bottles. They had studied abroad, knew their favourite kinds of sashimi and were friends with their parents. ... Nobody smoked cigarettes. They honed their bodies with the aim of either perfect homeostasis or eternal life. They ate red meat only once a month, to time their consumption of iron with the end of their menstrual cycles. They started companies whose names referenced fantasy fiction. They were adults, but they could seem like children. Their sex lives were impossible to fathom, because they seemed never to have lived in darkness.

...Elizabeth had moved to San Francisco after college. ... Elizabeth had never before lived in a city. ... She met Wes one night in late 2010, when he accompanied one of her co-workers to a boardgame party at her house. For their first date, they attended Nerd Night at a local bar. They watched a lecture about the future of teledildonics. On the walk home, they kissed. Then Wes, with the transparency he thought of as mature and fair, gave a speech of pre-emptive relationship indemnity. He was still getting over his last girlfriend, he said. He did not want to be in a relationship. Elizabeth tried not to roll her eyes – it was the first date! They said goodnight and parted ways.

...They began meeting once a week for drinks, dates and sleeping over, always with a show of nonchalance. Given the choice, Elizabeth would have wanted a more serious commitment. She was only 23, but she had one reaction to Wes’s lack of interest in their relationship: he was acting like a baby. Fine, she decided. She would also see other people.

...One day in May 2011, six months after they met, Elizabeth introduced Wes to psilocybin mushrooms. The trip shifted their relationship. They still did not use the word “love”, but they now acknowledged what they referred to as “emotional involvement”.

Elizabeth did not describe what she was doing – having sex with two men on a regular basis over an extended period of time, with the occasional extra-relationship dalliance besides – as polyamory. The word had cultural connotations for her, of swinging married people or creepy old men.

Although, like most people her age, she had friends whose partnerships allowed for sex with others, those friends tended to use the term “open relationship”, which was somehow less infused with the stigma of intentional weirdness, and did not amount to a proclamation of sexual identity.

Still, whatever accidental arrangement she had created, by the end of that year the lack of sexual boundaries was causing Elizabeth no small amount of anxiety. ... To allay her growing insecurity, she turned to self-help and read The Ethical Slut: A Practical Guide To Polyamory, Open Relationships & Other Adventures, Sex At Dawn by Christopher Ryan and Cacilda Jethá, and Tristan Taormino’s Opening Up.

These books convinced Elizabeth that monogamy was a choice, not a given. It began to take on the cast of an unreasonable expectation, best suited to people who disliked experimentation: people not like her.

...They agreed that they would think of themselves as a couple from now on, instead of two single people who slept together, but they would still not be monogamous. Now they had to figure out how to manage the logistics. Elizabeth compiled a shared Google doc that was to become the foundation of their research – a syllabus of recommended reading, places to attend discussion groups and sex parties open to the public. They went to a party at a sex club and had sex surrounded by onlookers. ... Elizabeth and Wes felt they could draw upon certain ideas of the older polyamorists, but had to do a lot of the thinking on their own. After their research, they began to draw up rules.

...Despite making rules, they would aim to fail. It was a concept they borrowed from computer security: if an unplanned event occurs, the default is to act first, then worry about formulating responses for the next time.

...Wes said he wouldn’t mind if Elizabeth and Chris started to sleep together. ... By the end of 2011, the three regularly socialised as a group outside work. Soon after, Chris and Elizabeth would also hang out by themselves. ... One night, Chris accompanied Elizabeth and Wes to a queer dance party. They all danced together, dancing that evolved seamlessly to kissing on the dance floor. Chris enjoyed it, but felt a little bit like the third wheel. His friends were on MDMA and he was not. Elizabeth and Wes had planned a foursome with another couple later that night, so Chris ended up going home alone.

It became an unspoken understanding that if the three of them went out dancing, they would probably end up kissing together. This was true for a whole group of friends who began to coalesce at this time around Wes and Elizabeth, who began to be sought after as gurus by other couples who had considered opening their relationships. The shared Google doc soon had multiple subscribers.

...The two men were affectionate with each other, even kissing hello or goodbye, but Chris was surprisingly troubled by his unreturned desire for Wes.

I first met Chris, Elizabeth, and Wes in late May 2012, when their experiment was just a few months old. I was seven years older than Elizabeth and Chris, eight older than Wes. I envied the openness with which they shared their attractions. They did not proceed recklessly. They drew up ethical codes to protect their relationships. Elizabeth and Wes seemed to plunge forward through life without fear. I saw in Chris a little more hesitation.

...They discussed moving in together, and finally did so in late 2013. The decision carried less weight with the knowledge that, at least a few times a month, one of them would be spending the night at someone else’s place.

...In August 2014, Elizabeth and Wes got engaged at the Burning Man festival. In August 2015, I attended their wedding in Black Rock City. To the tune of Somewhere Over The Rainbow played on an electric piano, Wes and Elizabeth, he in a white, button-down shirt and black trousers, she in a white dress, both with colourful face paint around their eyes, processed to an altar decorated with pink fabric flowers and tasselled fringe. Relatives delivered loving statements. Wes’s godfather recited a Druid prayer. We lit sparklers and held them skyward as the sun set, forming a ring of light. The drone of a didgeridoo obscured the couple’s quiet murmuring.

“By the power invested in me by the internet, you are now married,” said the officiant, Wes’s uncle. “You can kiss each other and other people.”

The invitation had laid out the party’s rules in a charter, to which every invitee had to agree.....

...I wandered back to the loft, where couples and threesomes had begun to pair off on couches. Nearby was a wheel of fortune that could be spun for instructions. ... Then we went into the second room to do whip-its. ... Around us, groups of people lay together on beds and couches, or stood making out in corners. On a couch, a man lay across the laps of his friends, who formed a spanking train. I sat with Elizabeth and took a whip-it, after which she massaged my head while a man lightly shocked me with an electrified wand.

...My then boyfriend in New York had not wanted me to attend the party at all. I was still thinking of myself as just a visitor, or rather neither here nor there, someone undertaking an abstract inquiry, but not yet with true intention. ... Now I sat in a penthouse with a group of sleepy partygoers. We chatted and looked at the view. In the background was the sound of whip-its, of orgasms, of water falling from a shower into a porcelain tub.