Again multiple tabloids are gushing over a happy polyfamily, and again it's by way of an agency's product package designed for tabloid news outlets — including text, lots of lovely pix, and a video. This time we're back in Barcroft Media's court; Barcroft and Triangle News are competing to supply this niche demand.

I suppose we shouldn't complain, other than to say that too many of these stories may give the impression that "polyamory" only consists of the family-formation type.

Excerpts from the version of the package on today's Daily Mail site:

'We are pretty much like a normal family': Polyamorous trio expecting their FIFTH child insist their setup is not that unusual — except there's an 'extra mother and lots of kids' 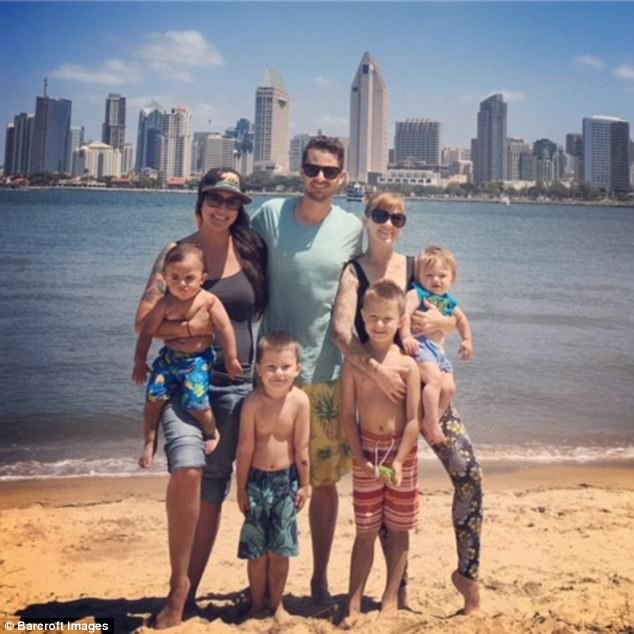 —Buddy and Rose Sullivan, both 33, of San Diego share life with Lauren King, 34.
—Lauren is expecting her second child who will be fifth boy to join the family.
—'Thruple' are dedicated to each other and not open to other relationships.
—Lauren and Rose are hoping to formally adopt each other's children.


By Siofra Brennan for Mailonline

...Seven members and counting, the Sullivan-Kings are larger than your average family. And with two mothers and one dad, they are also not the most conventional.

So far, Buddy, 33, Rose, 33 and Lauren, 34, who share a California king size bed in their San Diego home, have four children between them — all boys — with a fifth on the way, another boy.

'We are pretty much like a normal family expect there is an extra mother and we have a lot of kids,' Buddy said.

Buddy and Rose started dating in college, eventually got married and had two children, Owen, now seven, and James, five.

Settled in a monogamous relationship, the couple talked about bringing someone else into their bedroom to spice up their sex lives – but they didn't expect the rest of their lives to change so dramatically.

Rose, who identifies as bisexual, got back in touch with old girlfriend Lauren on social media.

She said: 'I looked up Lauren on Facebook just to see how she was doing and we met up and started hanging out as friends. She met the boys and she met Buddy and then it just like happened. We all just, got into a relationship.'

'We don't have a schedule, it's always spur of the moment and when we do it's always the three of us — it's never boring, it's definitely exciting.'

But their attraction wasn't just sexual: not only did Rose and Lauren fall in love all over again, Buddy and Lauren also realised they had a connection and the three now describe themselves as being in a committed triad. 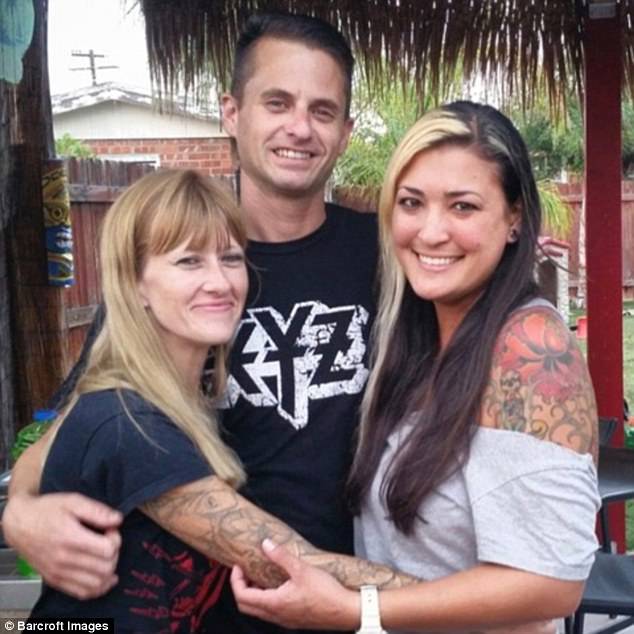 And while none of them deliberately sought out to be in a polyamorous relationship, they now couldn't imagine any other dynamic working.

Although a wedding ceremony between three people wouldn't be legally binding, the trio plan to marry and believe it will be a chance to declare their love for one another equally to friends and family.

Rose said: 'Being married I just think it means that we're all together — like we're in this forever, till the end and all in it as a family.

The thruple have begun landmark legal proceedings so that all three adults share equal legal responsibility for the children. Rose said: 'It's a very, very long process. We just filed the paperwork a while ago for Damien so now we're just waiting for the court day and all that. 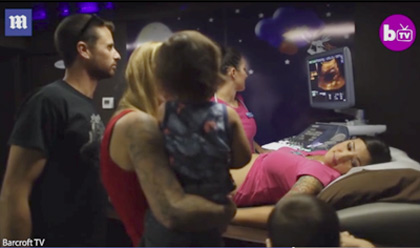 The family will first apply for Rose to legally adopt Lauren and Buddy's biological son Damien; if successful they will then go through the process again for each child.

Lauren said: 'Rose's family is pretty big in the church, and they are really nice — they all friend-requested me right away and wanted to know me and Buddy's family is Catholic and they were very open to that. So we haven't had any problems from their friends and family.

'The problem I did have was with my friends in the lesbian community. You would think they will be more accepting but they were the ones who were least accepting of it, they were the hardest to get through to and some of them I still don't talk to.'

Lauren said: 'When we are all together and even if we are holding hands or sitting at a coffee table and we are all touching hands, we get people walking by and do like a triple take because they don't expect to see three people being so close together.

For now the family are focused on the arrival of baby boy number five and bringing up their children.

Buddy said: 'We are just normal people. I know we have a unique situation that we are in. But our goal as a family is pretty much the same as everyone else's. We want to raise our children to be good people and do good and be successful in life and have their own families.' ...

The misconception that poly is only about living-together families is pretty benign — compared to the much worse misconception that polyamory is just a hip new word for old-style dating around with no deeper interconnections. Or, outright cheating. Those are misuses of the word that we need to call out and correct whenever we see them.


● BTW, Cheers go out to Bonita Applebum, advice columnist for Flagpole, the alternative weekly paper of Athens, Georgia. She made a point of including this paragraph in her reply today to a letter titled My Manager's Girlfriend Stole My Boyfriend (Jan. 24):

...Polyamory is a real relationship model that involves plenty of commitment and compromise, but your boss and her partner are terrible at it. Calling oneself “poly” isn’t an excuse to wreck homes and treat staff like a harem. Behavior like theirs is the reason people associate the polyamorous relationship model with selfishness and dishonesty. They shouldn’t use the label or involve others in their messy shit until they know how to be respectful and responsible to their potential partners.

1. Here in Massachusetts, friends of ours in a triad had no trouble at all, years ago, setting up a co-guardianship of three adults for their kids. Legal help. Your state may vary.