YouGov, a polling operation known for middling-good accuracy for elections, just announced results of a survey asking people about their preferred relationship style on a scale from monogamy to total openness. It's a followup to a similar survey that asked the same questions in 2016. From the press release:

A January poll of more than 1,300 US adults finds that about one-third (32%) of US adults say that their ideal relationship is non-monogamous to some degree. 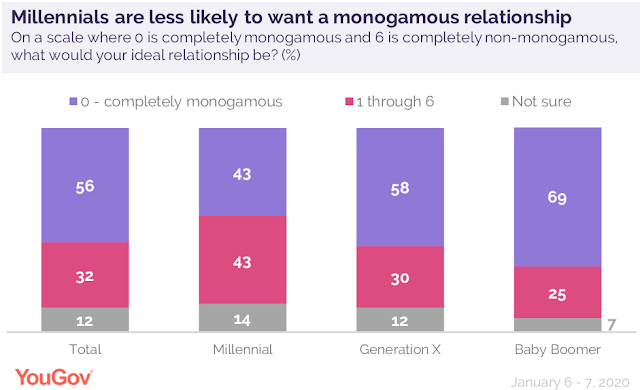 YouGov’s data suggests that Americans as a whole might be gradually warming up to the idea of non-monogamy.

When asked in September 2016 about their ideal relationship, 61 percent said it would be completely monogamous. In January 2020, that number has dropped slightly, to 56 percent.

The survey also confirmed that many partnered Americans are already in non-monogamous relationships:

Millennials (56%) are less likely than members of Generation X (69%) and Baby Boomers (74%) to say they would not be okay with this under any circumstances. Just over one in five Millennials (22%) chose “Whether or not I am okay with it depends on the situation,” while 9 percent said they would be okay with it.

A lot of interesting stuff shows up in the tables of the full results, especially comparing with the September 2016 survey. Three that caught my attention:

● More women than men say their ideal relationship is "completely monogamous" (65% of women vs. 47% of men in 2020, down from 76% vs. 66% in 2016), which supports the usual stereotype of what men vs. women want and undermines some recent claims otherwise. Also, in the last 3¼ years, interest in nonmonogamy rose almost twice as fast among men as women, so the 2016 imbalance has almost doubled. Uh-oh.

This means that when dating, it's more important than ever to clarify very early whether you offer each other compatible relationship styles.

● Contrary to conservative panic that morally degenerate elites are modeling consensual nonmonogamy to the stricter, more religious lower classes who can't handle it, the survey finds that both the desire for monogamy and the practice of it increase with education and income.

● In the South, where religious and social conservatism has its strongest lock on politics, monogamy is no more people's "ideal relationship type" than it is in the liberal Northeast. And monogamy is only slightly more people's actual ideal than in the West, where many of America's social and sexual innovations first bubbled up.

P.S.: The Poly Living Convention is this weekend (Feb. 7–9) in Philadelphia. Register online or at the door. Day passes available. See you there!