Today is Metamour Day! Share it out. Info, links, and background.

February 28 is Metamour Day, "Honoring Polyamory's Most Distinctive Relationships." It's Valentine's Day times two.
And once again the National Coalition for Sexual Freedom (NCSF) has come up with a bunch of goodies for you to pass along.
NCSF picked up this idea and made it a thing starting two years ago. Now a lot of polyfolks are committed to keeping it going forever. Share it out from NCSF's Facebook or from their Twitter rather than from here, to help make those trend today. And browse and use the tags  #metamour and #MetamourDay
Now read on. To begin with, here's NCSF's press release:

“As consensual non-monogamy becomes more common, we need to honor these relationships,” says Ceyda Kirin, Director of Metamour Day and NCSF Board Member. “And with the added stress and isolation caused by the pandemic, now more than ever we need to acknowledge and celebrate our partner’s partners.”

Metamour Day is a way to appreciate the special role of a metamour, your partner’s partner, and to acknowledge the supportive and beneficial impact of non-monogamy on our collective lives. It’s about communal appreciation of our family structures, rather than forced compersion (the opposite of “jealousy” or a positive emotional reaction to a loved one’s other relationship).

Check out the Metamour Day page to find more information and how you can participate, including downloading our new Metamour Day image in English, Spanish, French, Norwegian, as well as Metamour Day Cards by Anna D. Hirsch with PositivelyPolyAnna.com. You can also see our new What is a Metamour? video. 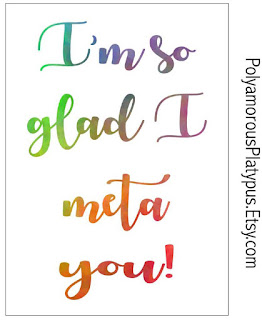 Which is precisely on target.

Your metamour is your lover's other lover. The defining aspect of polyamory – the thing that distinguishes it from other forms of consensual non-monogamy such as open relationships and swinging – is the understanding that your metas are significant full persons in regard to you, who require, at minimum, your consideration, respect, and basic good will.
Even if you hardly know them and/or don't much like them, and even if ordinary politeness is as far as you go. A lot like extended family. Because polyamory carries an implicit ethic that for better or worse, "We're all in this together."
And of course, there's absolutely no limit to how close you and your metas can become if you both wish.
Polyamory is the only model of romantic love – that magical thing that has enraptured and tormented and motivated humanity since humanity began – that generalizes (as mathematicians would say) romantic love to a larger realm of relationships beyond the private couple-love where most societies have rigorously and fearfully walled it away.
Consider, for instance, that the basic human emotion called compersion did not even have a word, as far as I know, until roughly 1980. (Yes the Buddhists have mudita, but that is not specific to romantic love.) For every emotion word in English at least, there was always a word for the opposite emotion (happy/sad, anxious/calm, etc.) except for the one emotion of romantic jealousy. Until as late as about 1980.


● Let's move on to Elisabeth Sheff's seminal article from the first Metamour Day, Delighting in Your Beloveds’ Other Lovers (Feb. 26, 2019). It's also excellent to share out. Here's some of it:

For more than 20 years I have been studying polyamorous families with kids, and I have seen them face the usual difficulties that come with life – illness, economic challenges, divorce, disability, and the like. What has stood out to me about these families who remain together in long-term polycules – some of them for 60 or more years – is that the metamour relationships make or break the family over the long term. These emotionally intimate, non-sexual chosen family relationships are so important in polyamorous families that I made up the word polyaffective to describe them.

Positive polyaffective relationships among metamours who become chosen family over time are the backbone of the poly family. Metamours who can’t stand each other and are never able to establish comfort (much less delight) in each others’ presence are not going to happily coexist over the long term. Metamours who add value to each others’ lives, however, can not only support each other when life inevitably throws them a curve ball, but also support the polyamorous relationship with their mutual partner if it falls on hard times.

...By promoting Metamour Day, NCSF hopes “to foster positive relationships between you and your metamours, whatever that might look like. It is not about forced compersion. It’s about communal appreciation within our family structures."

If you are lucky enough to have a metamour with whom you share compersion, celebrate them on February 28!


● That bit about "the metamour relationships make or break the family over the long term"? That's not just Sheff's observation of the families in her own long-term study. Joanna Iwanowska of the University of Warsaw published a paper titled Metamour Connections as the Underpinning of the Fabric of Polyamory.

"These bonds are significant and constitutive of polyamory," she writes;

...In a paper that appeared in the Journal of Applied Philosophy, Luke Brunning (2016) writes that “the presence of a third party is a constitutive feature of polyamory” (p. 9), and the third party is typically one’s metamour or a potential metamour. ... In addition to that, I argue that accepting the prospect of one’s partner dating another person entails agreeing to be in a relationship with this person, even if this relationship might remain indirect....  Metamour connections are the underpinning of the fabric of polyamory, and they deserve as much academic attention and research as the polyamorous romantic connections. ...


The paper gets way more academical than I can follow (you need to know your Seneca and your Aristotelian tree model of reality), but those are the basic ideas.

● Cartoonist Tikva Wolf writes, "When things are good, bask in the joy!"

● From The Establishment, a women's site on Medium.com, Why You Should Meet Your Partner’s Lovers (March 10, 2016)

Two months ago, my lovers met over tacos.

...I was confident they’d get along. Besides the obvious, they have several things in common: They both love cats, feminism, and, of course, Tex-Mex food. This would give us at least three topics to talk about, even if things got awkward.

...In my experience and for many polyamorous folk I know, meeting other lovers can alleviate jealousy and reduce relationship drama. Until you meet, “the other” is a scary unknown; if we let our imaginations run away, we can inflate them into something perfect and unattainable, and most importantly, better than me. But when you do meet, you find out they’re just another human.

“Keeping them at arm’s length, never experiencing their actual humanity as a person, limits the potential of that relationship,” said Kiki Christie, a polyamorous and sex positive relationship educator from Vancouver Island, British Columbia.

“One of my early relationships was with a couple that was married,” Kiki told me. “I got to know my partner’s wife really well. They were living in a different city, so every time I went to visit him I would spend time with her, because it was at their home.”

Because they shared each other’s company so often, she felt safe bringing up problems and dealing with difficult emotions.

“Being in a familiar relationship with my partner’s partner, with her, meant that I felt more open about talking about my feelings to both of them. I didn’t feel like my communication had to be mitigated at all,” Kiki said. “If I had an issue I could speak directly.”

Genuine affection and connection blossomed between Kiki and her partner’s wife. They became such close friends that “we spent some holiday time together without my partner around. We just became very comfortable with each other. In fact he and I broke up, and she and I are still very good friends.”
Like Kiki, I shared a partner with a metamour for years. Our relationship remained platonic, but the intimacy we formed was genuine. We even had pet names for each other. The friendship outlasted our mutual relationship too, and we even got matching tattoos.

As Kiki said of her friendship, “It was its own relationship and it ultimately enhanced the poly relationship.”

...“There’s going to be metamours that you don’t really click with, that you don’t want to be friends with, or that you might not even like all that much,” [Kiki] cautioned. “So how do you manage to still have a sustainable relationship through that? Focusing on people as individuals can help.”

...Even when I’ve felt jealous of one of my metamours, witnessing their small gestures of kindness and affection together during a meeting helps me open my heart to a better understanding of what my partner sees in them. When I’m challenged by difficult emotions, I focus on my partner’s happiness and often find I can share in it a little.

As Kiki explained, mutual respect is key when metamour relationships are challenging:

“If you’re constantly thinking of this person as someone who’s attached to my partner, or someone you’re not relating to one-on-one as an individual, even if you don’t particularly get along with them or see eye-to-eye with them, you’re not giving them or the relationship the respect it deserves. It’s like a relationship with a coworker you don’t get along with — you still have to see them as a person.”

Especially when there’s tension or distrust, we both believe metamour meetings can be crucial. ...

● Kiki Christie's The Benefits of Metamours, a list of six:

5.The sister/brother/wife/husband you always dreamed of. Share the pain, the joys, the chores and burping the baby. We. Are. Family. (If you can't hear funky music by now, you're younger than I am, but that's okay, sister)!

6. This is the biggest one, and the one I'm not at all inclined to make fun of. It's more than family. It is, in fact, true intimacy -- with someone your intimate partner is intimate with. With someone who loves your partner so much -- as you love them so much -- that the love just carries on over to everyone who is doing the loving.

●  More: Here are some Metamour Day Things To Do suggestions from NCSF. Take a look at  PolyAnna's Metamour Day cards (left side) and print one out for your meta(s). And there's other swag to browse from NCSF, CafePress, Zazzle, and Etsy.


●  And lastly, a warning: Metamour relations cannot be forced. You need to allow them to find their natural level.
Many metas have little or no interest in each other's company, and that's okay. No matter how much you may wish they did. Overbearing pressure for closeness between unwilling metas is a Known Creepy Thing. Open the door, yes. Encourage, yes. But don't try to drag someone through that door. There is something more important than love, and that is respect.
_________________________
Don't miss Polyamory in the News!
SUBSCRIBE by a feed, or
SUBSCRIBE by email
_________________________