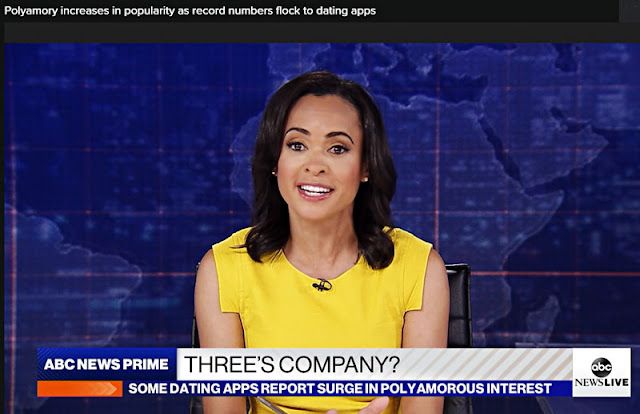 As the pandemic receded among the vaxxed and people were getting more social again, ABC News last week presented a long (6-minute) report on polyamory and ethical non-monogamy becoming a hot new "post-pandemic trend" for online dating: Polyamory increases in popularity as record numbers flock to dating apps (July 21).
Here's the whole video:
A partial transcript:

You may have heard the term "hot vax summer"? Well as more Americans get vaccinated they are eager to get back on the dating scene.... As Elwyn Lopez reports, increasingly singles are not looking for one person to meet. They try to make up for lost time apparently and find two partners to meet at the same time.
Rev Rucifer has found love, but is still looking for love, in search of a second match to add to her existing one. "I'm looking for Saturday night orgies and white picket fences. [Laughing]
"So right now I am in a polyamorous relationship. I have an amazing partner I love so much. We've been together just over two years. It's polyamorous, and he's married, and has a family and has two children."
After being cooped up quarantining, many Americans are ready to get out and mingle. ... Throughout the pandemic, the number of users on dating apps hit an all-time high.... with one option seeing a wild surge.
[One of three huddling:] "We had a threesome, and I just never left."
...The app Feeld says that between 2020 and 2021 it has seen a 670% increase in singles listing threesomes at the top of their wish list. ...
[Feeld founder:] "There has just been a desire to be honest. I think we're just, especially younger generations, we're just fed up with lies?"
It's referred to as ethical nonmonogamy.... But these types of relationships go way back to pre-pandemic times. ...

The segment spotlights a gay male triad known on social media as X9X26X: 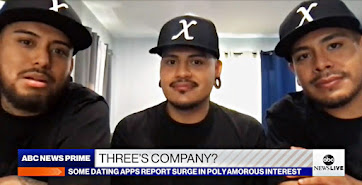 ...Now with Ray on board [the triad has] have taken off on social media, with hopes that all throuples will be [viewed] less side-eyed.

"So now I feel like we have the power to let the world know that polyamory -- being poly -- it's actually [being] normalized, it's happening in 2021."

It closes with this from Rev:

"We live in a society in which a monogamous, heteronormative lifestyle is the norm. It is what we are conditioned to believe is the only way. But there are other ways that are natural, that do feel good, that can be supportive, that bring more love, more understanding, more respect -- and that is what I think poly is about.

Maybe not perfect, but this broadcast was a big deal because
1.  If its reporting is right, we really have succeeded in mainstreaming "the polyamorous possibility" — Elisabeth Sheff's term for knowing that happy multi-relationships with everyone onboard are even possible. (For some people, at least: those genuinely motivated for it and willing to learn what's required to make it work for everyone. Who are those? Hint: We're talking habits of skilled, heartfelt communication with fearless good will. And it sure helps to be a big-hearted person with a secure attachment style, especially to yourself.)
Fifteen years ago, nearly everyone you met dismissed the polyamory concept as obviously impossible, "against human nature." In 2006 I thought it would take till 2030 or 2040 to get where we are now.
2.  Such a super-positive news report on mainstream network TV helps keep spreading this knowledge. You still meet people who haven't heard of the idea, and many more who don't expect to see it working happily among good, decent people.
Now, if only we could shame the bullshit artists on the dating scene out of misusing "polyamory" as bafflegab for their crappy behavior! We're not out of the woods yet. Just out this morning is another of many, many fine articles explaining the distinction: What Ethical Non-Monogamy Is and Isn't (July 28). It's on Psych Central, an authoritative mental-wellness site. "Ethical non-monogamy, polyamory, and open relationships are gaining popularity. But what exactly are they and how do you practice them?"

(I can't tell for sure if the ABC report aired on TV or is only on ABC's website. When networks put this much time and effort into a report they usually broadcast it. Anyone see it?)
●  Another story on the same theme, just out today: The Couple Who Opened Their Relationship Up When the Country Opened Up (GQ, July 28). "How a pandemic rough patch turned into a post-pandemic dive into ethical non-monogamy."
----------------------------------------
●  Meanwhile, the British tabloids and their worldwide reprinters continue their flood of (mostly) happy polyfamily profiles. The tabs discovered some years ago that provoking an attitude of amazement, positivity, and envy toward polyfamilies sells better than expressing shock and outrage, their original reaction to us. But don't imagine that those rags are on our side; they're just ratings-driven.
For example, just out in The Sun: We’ve dated 20 other people SINCE getting hitched – we’re open with our kids, it’s the secret to a happy marriage (July 22)

Jessica Levity, 35 and Joseph Daylover, 40, were monogamous for years until a pal mentioned polyamory -- having multiple partners.
Eight years on, producer Jessica and university lecturer Joseph said it's the "best decision" they ever made -- and they even go on double dates.
...The couple from Reno in Nevada, USA, who have two children, Azlan, three, and Lucius, four months, said they can't imagine being monogamous ever again and consider dating others "a form of self care". 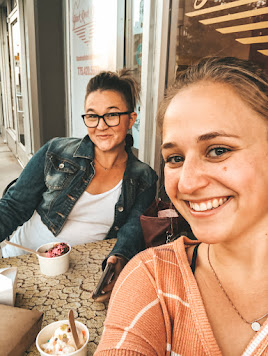 Jessica [at left, rear] said: “I had no idea what polyamory was until a friend mentioned it -- but as soon as I learned it was a thing, I realised it was exactly what I had been looking for. ... Our more serious partners very much become part of our family and we are happy to make room for that -- it all contributes to a more harmonious family life.”
[Jessica] said: “Discovering polyamory lit a fire in me. It felt like I’d discovered an important part of my identity and gave me a new zest for life. Everything felt like it made sense all of a sudden.”
...[Joseph] said: “At first I wouldn’t want to know details of what Jessica was doing, but our relationship developed into what is known as a ‘kitchen table’ style.
“What that means is that we're friendly with each other's partners -- they’ll come over for dinner or help with childcare. It’s a very communal lifestyle and it contributes to a harmonious family life.”
...Jessica said they're very open with their young children about when they go on dates and their other partners, and will continue to be as they grow up.
She said: "We want to teach our kids how to communicate, draw clear boundaries, advocate for what you want in a relationship, and how to recognise when a relationship has run its course, like you might have to with a friend, for example.
...Jessica insists their polyamorous model actually makes it easier to raise their youngsters -- saying: "I don't know how people survive in a nuclear family -- it's one of the hardest types of family I have experienced."...
...The pair now host a podcast, Remodeled, about polyamory, which they use to educate others. ...
Jessica: "Whoever said you can’t ‘have your cake and eat it’ clearly didn’t have enough cake!"

In response to all this going on, conservative commentators have been moaning that they've lost another culture war.
But I still worry that we don't blow it. Stay proudly ethical, folks; be excellent to others and lead by example.