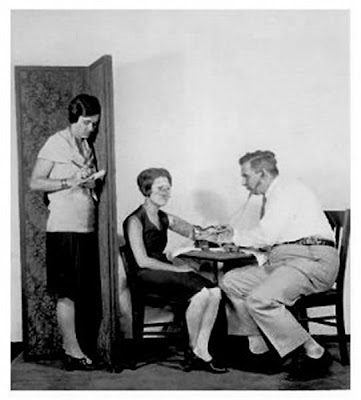 (In the photo at right, Marston is demonstrating the blood-pressure measuring machine he invented  taking the systolic blood pressure of his wife Elizabeth, seated and fitted with a breathing mask, while their life partner Olive Byrne takes notes.)

Here's the chapter reprint. It's quick and rather superficial. It was originally posted as "Wonder Woman's Sexy Past — How Polyamory Birthed the First Female Superhero", but some idiot with posting authority changed "Sexy" to "Dirty."

Here are some pictures of Marston, his highly accomplished wife Elizabeth Holloway Marston, and their longterm life partner Olive Byrne, in a story about Wonder Woman's origin by Lucius Scribbens on his blog Bigger Love.

The following is from a review of the book Wonder Woman: The Complete History, which another reviewer called "the best available history of both Wonder Woman and her creator":


...Marston always succeeded in defending his ideas. For him, Wonder Woman was not a role model for girls (as is often claimed) but the vehicle through which he would get young boys used to the idea of strong, dominating women. He believed that the next century would see the subjugation of men by women, and that, through domination, women would create a more loving society:

Wonder Woman is psychological propaganda for the new type of woman who should, I believe, rule the world. There isn't love enough in the male organism to run this planet peacefully. Woman's body contains twice as many love generating organs and endocrine mechanisms as the male. What woman lacks is the dominance or self assertive power to put over and enforce her love desires. I have given Wonder Woman this dominant force but have kept her loving, tender, maternal and feminine in every other way.

Marston was a fascinating character. He loved two women, had two children with each of them; all seven lived as one big, happy family. He invented the notorious lie detector; this book shows many pictures of Marston strapping svelte young women into early prototypes of his machine. Marston, despite (or because of?) his fantasies of a world ruled by dominating women, obviously enjoyed binding women -- and the thought of women binding each other:

Women are exciting for this one reason -- it is the secret of women's allure -- women enjoy submission, being bound. This I bring out in the Paradise Island sequences where the girls beg for chains and enjoy wearing them.

I have developed elaborate ways of having Wonder Woman and other characters confined ... confinement, to WW and the Amazons, is just a sporting game, an actual enjoyment of being subdued. This ... is the one truly great contribution of my Wonder Woman strip to moral education of the young. The only hope for peace is to teach people who are full of pep and unbound force to enjoy being bound ... Only when the control of self by others is more pleasant than the unbound assertion of self in human relationships can we hope for a stable, peaceful human society ... Giving to others, being controlled by them, submitting to other people cannot possibly be enjoyable without a strong erotic element.

William Moulton Marston is the subject of the book's first 89 pages. Conversations with some of his children make this part of the book all the more interesting. Marston -- the psychologist, the con man, the shameless self-promoter, the Hollywood consultant, the inventor, the utopian, the sexual adventurer, the father, the historical novelist, the creator of Wonder Woman -- deserves a book all his own. These 89 pages, excellent as they may be, make the reader yearn for yet more information on this strange man.

Sadly, Wonder Woman's story -- and subsequently this book on her history -- loses virtually any interesting elements with the passing of her creator [in 1947]. The remaining 120 or so pages read like an overlong epilogue and only emphasize again and again how post-Marston Wonder Woman is nothing but a string of disappointments.

In Boston, where Marston and Holloway were educated, Kamela Dolinova posted a few days ago: Wonder Woman the product of a polyamorous union with a feminist bent.

Of course, you can google up lots more.

Want to see some of those early comics? Here's Suffering Sappho! A Look At The Creator & Creation of Wonder Woman at Comic Book Resources, with links and bondage-y pages reprinted from early WW issues.

Loved WW as a child, she was a great pre-Xena role model for girls!!