Open marriage seems to be getting more attention now than at any time since the first wave after Nena and George O'Neill introduced the term in 1972. The celebrity press is full of horror stories. The thinking press is having discussions about "the new monogamy" (i.e. primary-secondary non-monogamy) and what "monogamish" gay couples can teach the straight world. And pop media are describing how open relationships can work. 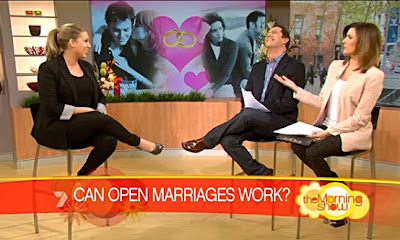 For instance, watch sexologist Dr. Nikki Goldstein covering some good bases during her TV appearance on "The Morning Show" in Australia (despite the dippy hosts). She stressed basic requirements of "Honesty, Trust, Boundaries, Communication," and the station displayed this list onscreen. You can also watch the segment via her website (approx. Nov. 10, 2011).

Meanwhile, last week I stepped into another massive online debate about what qualifies as "polyamory." The definition of "swinging" was brought in, and "love," and "commitment." Little was decided.

One participant was Franklin Veaux, whose funny and insightful Diagram of Non-Monogamy at right (source and background) went viral last year.

A simpler slice through this complex space, say I, would just show non-monogamy including a "Responsible Non-Monogamy" subset, which includes the smaller box "Open Relationships," which includes most of "Polyamory." The smaller boxes would extend a little outside the next larger ones, and the borders would be gray areas, not sharp lines.

What's the difference? What do people mean when they use one term rather than the other?

"Polyamory" carries a certain radical subtext: that when three or more of you are linked by romantic relationships, to some degree you are all in this together — whether intimately, or even if some of you are barely acquainted. Polyamory implies this closing of the loop of connections, no matter how tenuously. "Open relationships" do not. They're about two people agreeing they can be nonexclusive.

Several opening-your-marriage books have come out in the last three years. Here are the ones I know about. The titles link to my review if I've written one:

● Open All the Way: Confessions From My Open Marriage
by Sadie Smythe (Kindle only) (2011)

● Love in Abundance: A Counselor's Guide to Open Relationships
by Kathy Labriola (2010)

● Love Unlimited: The Joys and Challenges of Open Relationships
by Leonie Linssen and Stephan Wik (2010)

● The Art and Etiquette of Polyamory: A Hands-on Guide to Open Sexual Relationships
by Françoise Simpère (2011)

● Opening Up: A Guide to Creating and Sustaining Open Relationships
by Tristan Taormino (2008)

● The Ethical Slut, 2nd edition: A Practical Guide to Polyamory, Open Relationships & Other Adventures
by Dossie Easton and Janet A. Hardy ("Catherine Lizst") (2009)

BTW, here are all nine of my poly book reviews so far.

Alan, you say above that polyamory is a subset of open relationships. But how does that fit with being in, say, a closed triad or closed quad? Non-monogamy may also be polyfidelity; the definition of polyamory needs to be addressed in some way that recognizes the bonds and commitment and exclusivity-within-the-group for numbers greater-than-two. But it doesn't fit easily in Veaux's Venn diagram format.

Lin - there is, in fact, a sectional set of polyfidelity on Franklin's diagram.

> you say above that polyamory is a subset
> of open relationships. But how does that
> fit with being in, say, a closed triad or
> closed quad?

UPDATE: A discussion of this post has been rolling on reddit/r/polyamory (big site, 4,400 members, young demographic), and some people there thought that by "closing of the loop" I meant becoming closed to new relationships, i.e. polyfidelitous.

Oops. Maybe I was unclear. By "closing of the loop" I didn't mean closing off the possibility of new relationships. I meant that the *linkage of the existing relationships* forms a loop to some degree, no matter how tenuously -- in the sense of "all in this thing together."

I think all the bellyaching over who is what and the definitions of words is silly and counterproductive. Who cares? Slapping a label on it isn't going to make things easier because they quite clearly mean different things to different people. The important thing is that people are starting to realize that there's more options out there besides monogamy and cheating.