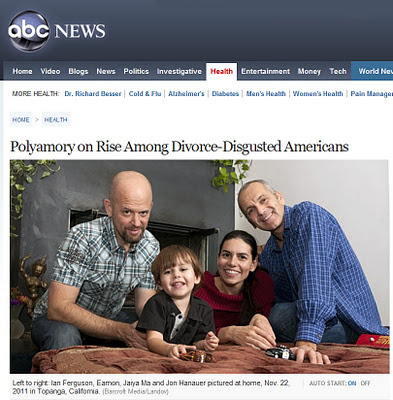 Jaiya, Jon and Ian are on quite a roll putting themselves out there media-wise. Today the ABC-TV News site uses them as the basis for a story on the rise of polyamory in general. This afternoon it was one of the four top-featured items on the ABC News homepage, along with the Virginia Tech shooting. Loving More and Robyn Trask also get some good words in.

Jaiya Ma has a rich life -- a successful career as a sexologist, a healthy 2-year-old and two men who have sex with her. And soon, there may be another woman who will become part of this unconventional, but loving, polyamorous family.

...The triad lives with open communication and an even more open marriage. Both men have had affairs with other women and Ferguson has now asked to bring another woman into the family.

"Jealousy comes up," Ma admits. "But we are all fairly harmonious. We are lucky that we are all have the tools and mechanisms to deal with jealousy and communication and never play the blame game."

Polyamory -- or "many loves" -- is not common, but the practice is growing, say advocates, especially among younger Americans who have grown up with a high divorce rate.

Polyamorists believe that people have the right to form their own complex relationships with multiple partners. The most vocal want the right to marry -- as a cluster.

One of the largest advocacy groups, Loving More, based in Loveland, Colo., publishes a magazine and holds conventions and retreats for the like-minded. Founded in 1985, the organization has more than 45,000 in its active database.

"We're getting ready to do a survey," said Executive Director Robyn Trask. "It's hard to gauge the number -- it's not on the census. But in the last two years, the movement has quite exploded."...

She said polyamory is not just an excuse to have "hook up and have casual sex."

"From my standpoint as a political activist, polyamory has become a blanket for things it is not," said Trask, who has a primary partner living with her in Colorado and two other men she is in love with -- one from New York City and another abroad.

...As a somatic sexologist, Ma works with other couples to heal their physical problems with sex when talk therapy has failed.

She has DVDs and two websites, Sex Is You, and How To Love Openly about polyamory. With Hanauer, she wrote a book, "Red Hot Touch".

Ma said all three partners are "pretty much straight."

"Not all three of us have sex together, for sure," she said. "But if you look at the Kinsey scale, there is no black or white. I work with women and do very somatic work. It's [about] people, that's more who I am, not necessarily gender."

Both Ferguson and Hanauer date other women, but that doesn't mean their family is free of friction.

"Ian just called me this afternoon and he has another lover and partner," said Ma. "He wants me to be more inclusive and meet her. We will have a conversation."

They have an agreement that each is not allowed to see someone else unless that person is interested in polyamory.

"Ian loves to do things that trigger me," she said. "He loves to date monogamous women and that drive me nuts -- because it sets them up for a lot of pain… he's always creating drama."

Ma also has other important rules about their relationships. "The biggest for me is safe sex," she said. "I am a total germ-a-phobe. I want to know who they are having sex with. Being a sexologist, I am hyper aware of that."

The second rule is to "check-in" with the others when another relationship arises. "It's not like we can go have sex with someone," said Ma. "There is definitely a conversation. I don't give permission -- I am not his Mom -- but let's honor and care about each other and how we feel."

"Within our family it's great," she said about three parents raising a child. "Oh, my god, it works well. It's amazing to watch."

So far, there isn't much research on how the children of polyamorous families fare, but Elisabeth Sheff, a sociologist at Georgia State University, is conducting the first large study of these children. Her work reveals that they can thrive, if their families are stable and loving....

Read the whole article (Dec. 8, 2011). It's getting reprinted on many other ABC-related sites.

Heading the page is a 10-minute video of Jaiya talking about how she became a sex educator, shot by the family themselves at home using amateur gear. On the front page of the ABC television website. Note: If want to control how you look in the media, supply them your own pictures and video.

Among the other videos ABC offers on the story's front page is the truly excellent one of another MFM triad, Terisa Greenan, Scott Campbell, and Larry Golding, from two years ago. It's the second panel in the lower left sidebar. It really deserves a watch if you haven't yet.

And join in the comments. They could use your help.

It does rather worry and irritate me that the author (Susan Donaldson James) states that the MEN 'have had affairs' but doesn't mention that if there's permission it's not really an 'affair'. Nor does she mention that if she's using the definition of 'affair' as being any relationships outside the monogamous 'norm' then the one having the most significant affair is Jaiya herself.

Also, that passage about Ian dating monogamous women makes him sound like a bit of an asshole.

As this whole interview seems stacked in the favour of making Jaiya Ma look like an absolutely lovely conscientious person (which I'm sure she is) it does seem rather like James is choosing the men (and in particular Ian) to be the 'bad guys' in the scenario when it seems (to me at least) that there need be no such 'bad guy' involved.

Though, as I said, Ian is made out to be a bit of an asshole in the above.