"I’ve got TWO men who love me"

Jaiya Ma and her triad partners Jon Hanauer and Ian Fergusen in California are continuing their intention to "put out our views, knowledge and lessons we have learned over the years," both in major media and through their websites www.howtoloveopenly.com and www.redhottouch.com. 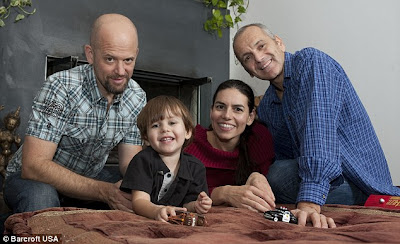 Having recently appeared in Details magazine and on Anderson Cooper's TV talk show, they've now debuted in Great Britain's lowbrow Daily Mail. Which is sometimes referred to over there as "that dreadful rag."

The article marvels at their setup as a freak show but otherwise treats them very well. And it printed their website URLs at the end, which I suspect was the main reason they did this gig. Judging by the number of pix in the online article, it must make quite a spread in today's paper. The pix, supplied by the triad, are certainly flattering. (Hint: when dealing with the media, always supply your own pix and videos.)

‘I’ve got TWO men who love me’: Woman has baby with the lover her boyfriend encouraged her to take (and they were BOTH there at the birth)

Jaiya Ma had been living her boyfriend Jon Hanauer, 49, for six years when he urged her to take a new lover.

Within weeks, Jaiya, 34, fell for a furniture designer Ian Ferguson, 44, at a dance class, and a year later she fell pregnant with his baby.

But Jon supported Jaiya, welcomed Ian into his home, and the two men helped deliver baby Eamon during an 'orgasmic' labour.

Now the three live together in a beautiful home in Topanga, California, raising Eamon, two and a half.

'I am so lucky,' said Jaiya, a sexologist. 'I have two amazing men who really care for me and Eamon. Having three parents around just makes life even better, and everyone talks about how advanced Eamon is.'

...Ian helped pay for Jaiya and Jon to move into a new house in the mountains of Topanga, California, and the three adults took classes to prepare for a home labour and 'orgasmic' birth.

...When Jaiya returned to work, Jon volunteered to be the main caregiver and to stay at home with the baby.

'My work is mainly writing and distributing our DVDs which I can do from home in the evenings,' said Jon. 'Ian's job means he is the main breadwinner and it makes sense for me to look after Eamon.'

The three admit it will be more difficult when Eamon starts school. But Jaiya added: 'There are so many modern families these days, with stepdads and stepmoms, or two dads, or two moms, it might not seem so different.

'Eamon learned to call Ian dadda without anyone telling him to say that. Sometimes he calls Jon "Poppa Jon" or "my caretaker".'

Jon adds: 'Eamon loves to have two guys running around and playing with him. I'd always want to be a part of Eamon's life.

'It has made me realise how much I want my own child. But if I meet another woman, it would have to be someone who would fit in with our family.'

Jaiya says: 'I'm looking for adventure at the moment, so I might want to find another partner in the future. But I'll always have a relationship with Jon and Ian, however that evolves.'

And Ian adds: 'I hope if we have new relationships they will add to the rest of the group. It would be great to have other polyamorous people in our area, so the community can support each other.'...

(On Fox TV stations' websites, Maggie Flecknoe's "Online Dish" is relaying some of this: Forget "Sister" Wives, How About "Brother" Husbands?.)

Wow, weird timing. I was just thinking along these lines this morning, before I checked this blog:
"'There are so many modern families these days, with stepdads and stepmoms, or two dads, or two moms, it might not seem so different."
Those families come from multiple loves happening sequentially, and are common and gaining acceptance all the time. It seems like a natural step to start accepting families that enjoy multiple loves simultaneously.