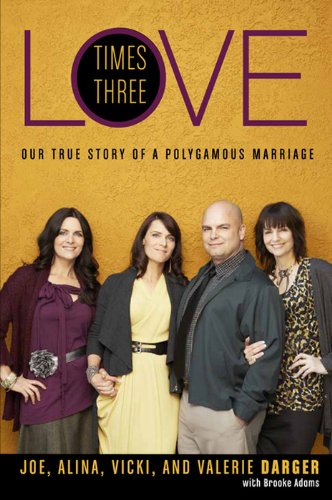 I didn't pay attention to Love Times Three: Our True Story of a Polygamous Marriage when it came out last September. It's the story of Joe, Alina, Vicky, and Valerie Darger, a Mormon polygamist family of the independent, Sister Wives variety living in the Salt Lake City suburbs like many others.

But people say that the Dargers' daily lives and issues parallel the lives of modern secular polyfamilies in some respects. This, I might note, usually doesn't extend to raising 23 kids. So here is a review of it — from Books I Done Read ("so you don't have to") by Rachel Krueger:

I don't watch "Big Love" (which is loosely based on [in that they stole several life-events from] the Dargers)....

Joe Darger is a dude. Alina and Vicki (who are cousins!) are both like, I am into that dude. Joe's mom is like, Why don't you BOTH be into that dude? So they buddy up and become besties and then Joe dates them both. And while they are very, It was difficult because Alina was very pretty, or, It was jealousy-making because Vicki was good at stuff, or, It was hard to be Not A Dick About Things, they are all writing this book together and they will all read it AND their friends and mothers will read it, so you can see them antsing carefully around things. It is honest without being juicy, to my Victorian-novel-loving disappointment.

Oh and then later, Vicki's twin sister Valerie (who married One Of Those Shitty Polygamists because Really, Assholes Are Everywhere) leaves her hideous marriage and returns home to heal and then Vicki and Alina are like, We dig you and you should join our marriage. So she does!

And the revolving-door storytelling means that you get to hear all sides, but it also means that you have to hear ALL SIDES. Of EVERY EVENT. But the mechanics of a healthy, functioning polygamous marriage are actually super-interesting, and they are exceedingly open about the necessity of being Grown-Ass Adults About Things (as well as The Repercussions Of Being Childish and Negatively Impacting Not Only Your Spouse But Your Spouse's Spouses and All The Childrens Thereof). Val remarks on the necessity for sister-wives to develop a level of independence from their husbands that many solo-wives would probably do well to cultivate....

...So! Not amazing in parts, keeping from the depths of the Saccharine Tar Pits in other parts only by a narrow margin, but ILLUMINATING.

The Library Journal calls the Dargers rather dull:

...What is perhaps most striking about their story is its ordinariness — the Dargers, despite their unusual cultural choices, are stalwart, upstanding, middle-class citizens; they are even a little dull (there is not a trace of the lurid in their narrative). Although they may not represent the style of all polygamous families, their “niceness” is apt to make readers wonder why we are so quick to condemn a life so few would choose, given the crushing expense of 24 children [oops — they musta had another one], ten cars, and 36 rolls of toilet paper per week. VERDICT: This unassuming book opens the door on plural marriage, and the result is both less thrilling and more accessible than one might expect....

For better or worse these people, like the Big Love and Sister Wives families, are setting the public image of what's possible in group-relationship households.

The bubbly polygamy advocate Sunshine Day ("Sunnie-2-Day") sometimes pops up on polyamory sites. A while back she posted:

National Polygamy Advocate Mark Henkel did a TV interview on the show STOSSEL on FOX Business Network [March 4, 2010].... At the end [co-host Gretchen Carlson] tried to play the "marrying non-humans" argument. Not only did [Henkel's] humorous response totally wipe out the silliness of her "what's next?" argument, but he had everyone laughing.... The video may be seen online embedded at NationalPolygamyAdvocate.com.


Henkel, who has pretty much trademarked the name National Polygamy Advocate, gets in the news year after year as the founder of the conservative Christian Polygamy organization TruthBearer.org. He writes: "Polygamous marriage dates as far back as the Biblical book of Genesis — written by polygamist Moses. Christian Polygamy generally involves Bible-studying Christians from any denomination. We have no similarity and no history with Mormonism whatsoever." Nor with secular polyamorists into "fornication and adultery." Oh well.

Of course, the world religion most associated with polygamy is Islam. The Quran says a man may have up to four wives (if he can treat them justly) but not vice versa. A female journalist in Egypt created a furor there by suggesting that turnabout would be fair play. The Guardian covered her case: "Polygamy for all" (Jan. 2, 2010). Here's her article "My Four Husbands and I" in Al-masry Al-youm (Egypt Independent) in Arabic (Oct. 22, 2010). No, she doesn't actually have four husbands.

Meanwhile, however: real-life polyandry in India, on CNN.

The Guardian reports on a polygamy resurgence in rural Russia and Central Asia brought on by a " 'man shortage', exacerbated by war, alcoholism and mass economic migration": 'Half a good man is better than none at all' (Oct. 26, 2009).

And here is religion writer Andrea Useem's excellent article on Muslim polygamists in the US (Slate, July 24, 2007). She concludes that they roughly match Fundamentalist Mormon polygamists in numbers, but they don't do TV.

According to Dr. Patricia Dixon of Georgia State University (which as a research facility seems to be quite interested in non-monogamy and society) there are quite a few Hebrew Biblical Israelites and Auser Aust who practice Polygamy also.

I just checked out Truthbearer and it is although I know 'exactly' what they mean by their little box, it is not really accurate to write it like you did. They wrote it that way very carefully and from a Biblical standpoint, egalitarian sexual freedom or Polyandry is not sanctioned but they don't actually refer to all Polyamorists as fornicators. In fact, considering the many Unicorn hunters or FMF unions in the PolyA scene they perfectly fit into Henkel's (and therefore, Christian) definition of a Biblically sanctioned relationship.

I read Lx3 and enjoyed it, I felt the communications skills they use are important for any sort of multi adult relationship. I had quite a few 'eureka' moments reading it and I would definitely tell people to give it a go, it is well worth the read.

I got the Darger's book. I enjoyed it and have been encouraging other people to read it, especially those who do the automatic stinky face when you mention anything outside the realm of Christian, heterosexual, monoracial monogamy. It is true they are remarkably ordinary, law abiding citizens. Yet the level of bigotry they encounter (and have encountered for all of their lives) is pretty awful. Even teachers making sly examples of their children when discussing how "bad" polygamy is. No child should ever have to hide how many mothers or fathers they have. Nor should they be made to feel ashamed.