New attention to poly in Ireland 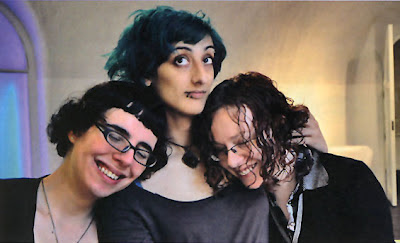 Two unrelated articles about polyamory in Ireland have come out almost at once: in the mainstream Herald of Dublin, and in Hot Press, Ireland's answer to Rolling Stone. The photo above is from the latter.

First, in the Herald's "Lifestyle" section:

Is this the end of fidelity?

AFTER decades of research and whole tomes being written on the subject, the jury is still out on whether humans can still be faithful to one person.... Between a bounty of technology and a general relaxing of social mores, the temptation to stray is stronger than ever before.... When it comes to love and marriage, the Irish have come a long way ... but those conservative values and traditions still seem to hold firm.

However, there is an alternative to the clandestine encounters and the soul-sapping subterfuge. If one option for those in love is to forsake all others in a relationship and another is to commit infidelity with others being (hopefully) none the wiser, yet another option is the open relationship.

...Can the Irish -- who have been shackled to traditional ideas about marriage for centuries -- really get behind such a progressive idea?

...As a relationship counsellor, Tony Moore of Relationships Ireland has encountered numerous couples that have forged ahead with an open arrangement. "Usually the man wants to make a move to an open relationship," he states. "The reasons are plentiful; boredom, curiosity and so on.

"In my experience, he tries to convince his partner and she'll go along with it initially but feelings eventually come into it. Many couples have a sexual open relationship but the emotional side always comes into it. He doesn't want to be found out, if he can bring her along with him, it eases his conscience a bit. Besides, seeing your partner have sex with another woman is a classic male fantasy."

But can these relationships work in Ireland? "On the one hand, it's thousands of years of tradition to battle against," he explains.

...He adds: "I've never come across an individual where this has ended happily. I've seen countless couples come to me with this type of arrangement and it ends in misery."

However, and railing against the social norms, a growing number of Irish people are finding an alternative path that works for them. Dubliner 20-something Alison (no surname at her request) is part of Ireland's community of practising polyamorists; people who have relationships with more than one person at a time.

"I always knew from a young age, around 16, that it didn't make sense to me to be with one person and close myself off to everyone else," she says. "A monogamous relationship is not what I want to do.

"I found out about polyamory a few years ago and it was like, 'this is how I want my life to be'. I'll never be happy in a relationship where you're obliged to love one person and you're closed off to everything else. There's nothing wrong with loving just one person, but this is just the way it is for me."

Yet, as Alison attests, polyamory is deeply misunderstood in this country.... "A lot of people don't know what it means, and they think it's the same thing as swinging," she explains. "When I first came out to friends they were like, 'oh, you're a swinger'. They used to think 'that's not going to last', or 'it must be all about sex'. I've no problem with anyone who wants to have that, but (polyamory) is about having long and committed relationships. It's about having a relationship that's open and honest and everyone involved knows the score."...

...Alison, who admits that she initially felt "closeted" after making the decision to live a polyamorous life, is now part of a 300-strong support group in Dublin. "It isn't a dating group, more like a support network where we meet and chat," she says.

"There are people of all ages in it, from 18-year-olds to people with grandchildren. It's very multicultural and multi-national ... maybe because travel opens the mind. But everyone has regular lives. It's the person you meet or work with every day."

...So far, so intriguing ... and at a time where monogamy seems harder and harder to swallow for most people, there is an argument to be made that Alison and her fellow polyamorists are ahead of the societal curve....

Randy, an organizer of the Dublin poly group in the story, writes: "I wanted to let you know about an article that appears in the Irish (mostly music) magazine Hot Press. It features an interview with an open all-female triad; two of the people were/are in our Irish polyamory group. Interestingly, no mention of our 4.5-year and still-going-strong poly group with monthly meetings, social events, etc..."

Here are bits. The article is not on the Hot Press website yet, but you can click on the pages below for readable blowups. 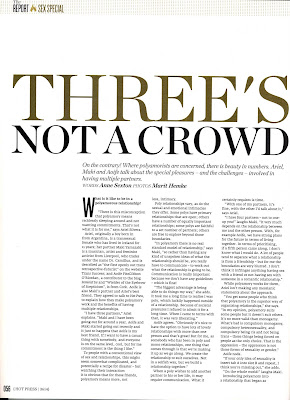 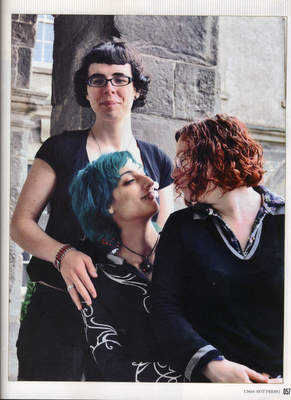 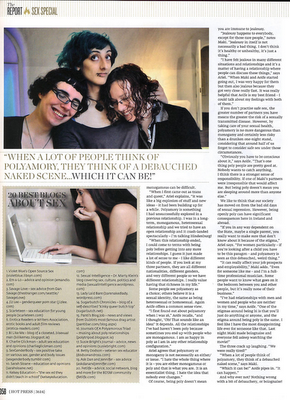 Three's Not a Crowd

On the contrary! Where polyamorists are concerned, there's beauty in numbers. Ariel, Maki and Aoife talk about the special pleasures — and challenges — involved in having multiple partners.

...To people with a conventional view of sex and relationships, this might seem somewhat complicated, and potentially a recipe for disaster — but watching their interaction it is obvious that for these friends, polyamory means more, not less, intimacy.

...Aoife agrees. "Obviously it's nice to have the option to have lots of lovely relationships with more than one person and that's great! But for me, as somebody who has been in poly and mono relationships, one thing that comes through is that we're making it up as we go along. We create the relationship to suit ourselves. Not in a selfish way, but we build a relationship together."

...Some people see polyamory as a choice; others see it as a sexual identity, the same as being hetereoesxual or homosexual. Again, Aoife offers a common sense view.

"I first found out about polyamory when I was 16, Aoife recalls, "and I thought, 'Oh! That sounds like an idea! It depends. All the relationships I've had haven't been poly because sometimes you end up with people who are monogamous. I am as happy in poly as I am in any other relationship configuration."

Ariel agrees that polyamoy or monogamy is not necessarily an either/or issue. "I hate the whole thing where it is — you are either monogamous or poly and that's who you are. It is an essentialist thing. I hate the idea that nobody ever changes."

Also: The Leinster Leader just published (August 7, 2012) an article on swinging and its history that mentions polyamory (incorrectly defining it as being only about polyfamily formation).

Here are all my posts about poly in the Irish media (including this one; scroll down). There may be more that I've missed.

Sad to see they have done the classic Interview with a therapist thing who then states the obvious...."I have never seen this end well"

I would imagine the so called therapist never actually counseled any poly people, only looking at poly from a textbook perspective. While poly takes on all forms, my own experience is one of success. While we have issues from time to time (as do all marriages), we talk and work out any problems, and it's worked very well for us.

Hi Alan - I'm making a radio programme for RTE about polyamory and monogamy and I was wondering if you'd be able to help me find people to speak to? Or would you be interested in speaking to me?