"3 on a Bed,"
a heartfelt poly movie in India

The Times of India
The Telegraph India

The extraordinary revelation that three or more people can fall in love together, and that this can work successfully and joyfully, is something that practically no culture admits; the early Christians may have been an exception. Nevertheless, the phenomenon is cross-cultural. It is not limited to the Western world, where the recognition of poly possibilities has lately become a movement. Rather, it seems to be a potential rooted deep in human nature — though few people yet know it exists.

In India, the young filmmakers Rajdeep Paul and Sarmistha Maiti were struck by this revelation and made a short, deeply romantic movie exploring it. Last week they entered the movie in a prestigious Indian film festival, after several months of delay getting it past a government censorship board. 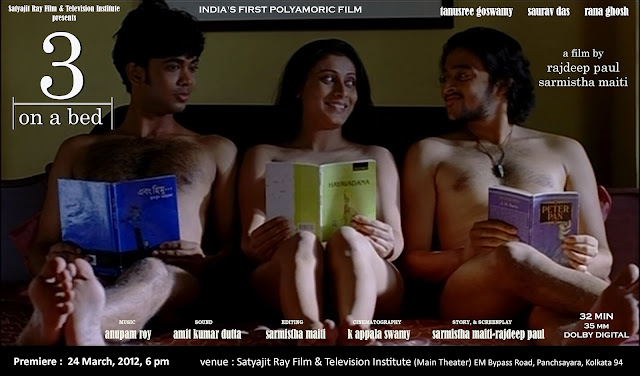 The following article about it appeared in the Times of India, which is reported to be the world's largest-circulation English newspaper:

Short film on 'polyamory' makes it to film fest

KOLKATA: It is a subject that would be considered taboo by some, scandalous by others and controversial by most. But IT professional turned filmmaker Rajdeep Paul isn't bothered. He is happy that '3 on a Bed' has finally been cleared by the censors and will be screened at Nandan III on Monday [Nov. 12] as part of the Kolkata [Calcutta] Film Festival.

The 32-minute film on polyamory revolves around the lives of three youngsters — Kapil, Padmini and Devdutt. Padmini loves both men, but instead of making a choice between the two, decides to live with both.

Kapil or Devdutt don't mind either. Instead of fighting over possession and hierarchy, they share their love equally between themselves driven by a simple idea of 'All love shared is good'.

The poster of the film is bold but then the theme is bolder still, as student films are expected to be. No wonder, it was caught up for months at the state censor board till being cleared for screening along with 20 others in the non-competitive students' short film category.

Paul and co-director Sarmistha Maiti, both... passed out from the Satyajit Ray Film and Television Institute (SRFTI) in March 2012, said the film is inspired by Girish Karnad's play 'Hayavadana'. which deals with the subject of polyamory, though in a slightly different way. In fact, the characters in the film have also been named after those in Karnad's play.

"Both Sarmistha and I could relate to the central theme behind Karnad's play. With so much of intermingling between both sexes, polyamorous relationships are not very uncommon in this generation and we are not hesitant to accept it," said Paul. whose film has been getting critical reviews on YouTube for its concept....

Polyamorous relationships believe in the acceptance of having more than one intimate relationship at a time with the knowledge and consent of everybody and sexual needs are secondary here, the director said....

The movie premiered last March 24th. A blogger who was at the opening wrote:

As the name suggests, the story revolves around three friends, Kapil, Debdutta and Padmini, all art college pass-outs, sharing their bodies, soul, food and a bed....

...While watching ‘3 on a bed’, I recalled an article published in popular Bengali news daily about the life-story of a business person; living at Garia in Kolkata; who is married to two women, who are sisters. He also has had children from his wives and they all are living together happily, under one roof. Perhaps, people may term this as an exceptional incidence of our society, but the truth is, it exists and relationship is successful.

The concept of this film raises the same issue; can this kind of love and sexual relationship exists in our society? If so, what shall be their terms? What should be the model of our social system?...

...As the film ends, it leaves the audience with a feel good feeling. When we see the three characters to unite again, it’s a strong message given by the director duo; yes, a new world is possible, what we all need to do is to love others selflessly.

As Debdutta replied in his interview, “It might be your dream; but you need a team to realize your dream”. I wish, the team of Rajdeep and Sarmistha will continue making films and keep sharing their dreams with us.

For 2 student filmmakers, 3 is not a crowd

...Rajdeep: ...I think from the relationship orientation angle, I am polyamoric. I came to know about polyamory on the Internet seven or eight years ago. Sarmistha and I have been working on projects from the second year... and this became a favourite topic for us. That’s where the idea for the film came from.

Sarmistha: Rajdeep came to know of the term ‘polyamory’ first. But I have always looked at love in this way, may be. It should not be bound by some kind of limitation. I believe in polyamory in faith. When we started working on this film, we checked the latest edition of The Penguin Dictionary of Sociology and this term was not there, but it has been there on the Internet for half a decade. Along with that there is another term called compassion [sic], equivalent to empathy, you are happy when your lover is happy or your friend is happy.

Rajdeep started researching whether there was a society or a commune where people lived like this. He came across many such individuals. We did not want to put forward something that was alien. We wanted to show what we are....

The feedback so far?

Sarmistha: A 75-year-old man hugged me after the show. A simple middle-class engineer told me that this shupto ichhey (latent desire) is there in all of us. 'We cannot say it, but you all can!'

Rajdeep: My father loved it. He said there were tears in his eyes when he saw the last scene (where Kapil, Padmini and Debdutta kiss each other). That’s a great compliment!...

Meanwhile, elsewhere in the Indian press, The Hindu mentioned poly as if readers already know about it:

...In the latest art exhibition organised by the gallery, ‘The Alchemy of Dreams'... [the] youngest amongst the ensemble is Ujjwal Kumar, a 21-year-old budding painter and a cartoonist. Ujjwal's work is based on love, emotions and human relationships. “I have worked on a theme of polyamory or dual relationships in this exhibition,” explains Ujjwal....

Here are several earlier articles on poly in The Hindu and elsewhere.

This is really exciting! :-)

Hi this is Rajdeep. Thanks for the write-up on our film. I remember the interview from the telegraph, I used the word "compersion' which they wrongly wrote as compassion....

TRIAMBIGRAM I tried to send you a message through your blog about including your film in the poly collection at the Kinsey Institute. Please contact me to discuss this?

I replied you via my blog saying we would be very happy to have our film added to your collection but I didn't get any reply back.

Please gimme your email so we can discuss this through mail. My mail id is rajdeepaul_x1@yahoo.com