Have "Lists of Five Myths" become a meme or something? Lists of "five myths about polyamory" have suddenly sprung up in the last few weeks:

● Five Myths About Polyamory by Stephanie Pappas, senior writer for LiveScience. Of her two LiveScience poly articles that came out on Valentine's Day, this is the one less widely reprinted in other media. 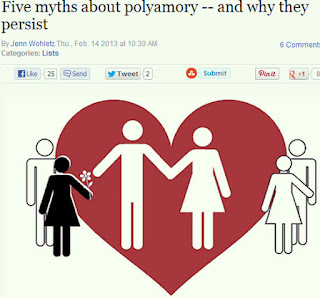 ● That same day, from Jenn Wohletz at Colorado's Westword: Five myths about polyamory -- and why they persist.

● By blogger Pearls and Pentagrams: The Silliest Things I’ve Ever Heard: Poly Misconceptions (yes there are five).

● At GoodTherapy.org, Five Myths About Polyamory and Monogamish Relationships, by Zawn Villines.

● Polyamory Myths by Faranae at Wikinut. This one only has four. Some people don't get the memo.

● Related: The Mistakes I've Made in open relationships (yes 5), by suggestivetongue.

Updates: Five Things Your Secondary Wants You to Know, by A Poly Nirvana.

Five Things You Might Not Know About Polyamory, by Deborah Anapol.

Update: Yes, Five Myths is a Thing. Turns out "Five Myths" has been a column at the Washington Post site for two years now, with more than 100 of them so far.

A new meme? I don't think so. I Googled "Five myths about" in article titles for the last year, and they seem to be spread evenly around the year. About anything and everything.

I've got a couple of links to lists of five things about poly, but not poly myths. I don't think it's what you wanted, but here they are, just in case: :)

I wrote "Five Things Your Secondary Wants you to Know", Because five sounds better than four, and six was just too many. ~G