Break in polyfamily's child murder case: Teen neighbor shoots police as they arrest him for the killing.


The Alanna Gallagher murder case — see previous post — seems solved. Alanna was the 6-year-old daughter of an MFM polyfamily in Saginaw, Texas. She was kidnapped and killed on July 1st. Suspicion hung everywhere, though police said the three parents were not considered serious suspects. Then last Friday, someone torched the family's car next to the house.

SAGINAW — An Arlington police officer who was serving a warrant against a suspect in the Alanna Gallagher murder case was shot Tuesday morning and is in serious condition at a local hospital, authorities said.

The suspect, a 17-year-old male, was also shot. Police would not release his name, but neighbors say he is Tyler Holder. Holder’s home, at 649 Babbling Brook Drive, is just two houses down from where Alanna had lived with her parents, Karl and Laura Gallagher and Miles McDaniel.

Katherine Chaumont, an FBI spokeswoman, said officers had knocked on the suspect’s door about 9 a.m. and engaged the suspect. She said an altercation erupted, the suspect pulled out a gun, and an exchange of gunfire followed.

Asked whether her son, Miles McDaniel, or the Gallaghers were acquainted with Holder, McDaniel said, “I didn’t get the impression that they know him.”

McDaniel said her granddaughter had been taught about “stranger danger” but it would not surprise her if the bubbly, outgoing girl did not consider a neighborhood teen a threat.

“I’m afraid that maybe she equated strangers with somebody she didn’t know that approached her rather than somebody she knew by sight,” McDaniel said. “She has two older siblings so she knew a lot of the families and the kids in the neighborhood. It was a pretty relaxed neighborhood that they felt safe in.”...

Here's a Google News search for the latest reports, with the most recent on top. 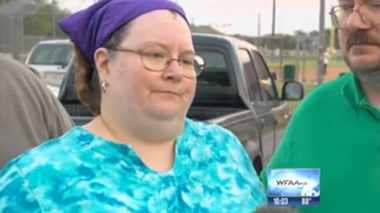 Update September 4, 2014: Tyler Holder pled guilty today and received a sentence of life in prison. He also got 40 years for attempted murder of the policeman and 20 years for setting the car on fire. News story.

Thank God they found him.

I'm speaking for myself. As someone who has known Laura and Karl for 15 or so years, and Miles for about 6 years. As someone who thinks Karl and Miles are good people, and who would walk though fire for Laura.

The last few weeks have been rough. For the Gallagher / McDaniel family. For their families. For their friends. For all of us who have been graced with their friendship and/or affection. We have seen some vile rumours and accusations spread around (and are STILL seeing it in some quarters.)

We have also been seeing an incredible amount of support. Both from friends and family there, and those of us like me who are there only in spirit. Their family, their friends, their church, all of those who know them have rallied around them

It breaks my heart to see people I care for grieving like this. At the same time I have to be impressed with the grace and courage they have shown though all of this. I am very proud to know them.

Again, I speak only for myself in this. But as someone who cares for them, thank you all for your kind words, thoughts, and prayers to my friends in this time.

most kidnappings and crimes against children are committed by family friends and acquaintances. Stranger Danger misinforms both children and parents about where their watchful eye should be.