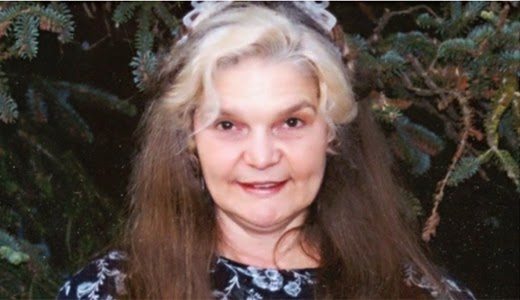 Now it's real. A revered pioneer of the polyamory movement passed away last evening, after an eight-year journey with cancer. Morning Glory Zell-Ravenheart gave us our name, tended our ideals in a continuous stream from the hippie counterculture to the modern poly movement, and helped to construct the Neo-Pagan religion in America with her life partner Oberon Zell-Ravenheart. She was at home in hospice care, surrounded by friends, family and waterbrothers.

Morning Glory was one of the two independent inventors of the word "polyamory" and "polyamorous," starting with her influential essay A Bouquet of Lovers, which she published in the Neo-Pagan magazine Green Egg in spring 1990; the word "polyamory" was in handouts she and Oberon distributed at a conference not long after. Oberon (born Timothy Zell) started the Stranger in a Strange Land-inspired Church of All Worlds in 1962, and helped to promote Stranger and ideals of group love as the 1960s counterculture grew. They met in 1973 and were married in 1974.

This 2-minute TV profile of her, Oberon, and their 22-year partner Julie Epona aired last year on a Destination America show titled "Polyamory in America":

Morning Glory was born Diana Moore in 1948 in Long Beach, California, an only child of Irish and Choctaw Indian ancestry. Just this winter she and Oberon published their autobiography, The Wizard and the Witch: Seven Decades of Counterculture, Magick & Paganism. 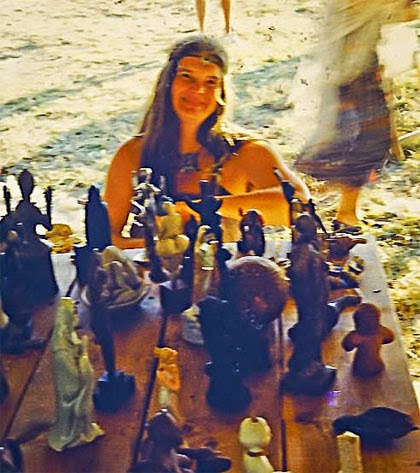 She was one of the sparks who, whether you know it or not, helped to kindle our fire and flower our lives.


Another night lying beside my beloved lifemate, with my hand on her heart to monitor her breathing. She's still breathing as I type this afternoon, but very deep within herself--and within the Dreaming--as she prepares herself for her transition to the Summerlands (actually, the Elysian fields, as we are Mystoi). I'm not really sleeping during these nights of vigil beside her, and I'm feeling very tired and fragile. As Bilbo said to Frodo at Rivendell, "I feel thin...like butter that's been spread over too much toast."

Yesterday was a strange and yet perfect Mother's Day. The pool and hot tub were filled with laughing children as their mothers bustled and visited, cleaning up, preparing food for everyone, and generally being wonderful. Everyone is doing their part--individually and collectively. We are so blessed with our Community!

We are surrounded and supported by loving friends and family--old lovers, students, initiates, water-brothers, kith and kin. And the cadre of Handmaidens who have come together to handle everything are a great blessing. Last night I was watching them as they sat with her burgundy velvet shroud spread across their laps, working together embroidering beautiful designs--such as yonis, pentagrams, and the White Tree of Gondor. Soon enough they will be washing her and preparing her body for its final journey to a green burial.

But for today, she rests peacefully.

I'll post links to obituaries below as they come in.

Her Facebook page, with pictures and remembrances. Oberon's, rapidly growing with many more.


We will be publishing our next issue of Green Egg [online] in about 2 weeks. This will be a special tribute to Morning Glory. We are collecting stories about her so if you'd like to submit a story re: M.G., send it in — even if only a paragraph, that's OK. We just want to get as many stories about her as possible. You can send your stories in to: greeneggzine [at] gmail.com .

If you have pictures you think are unique, please send those along as well. This issue will be free!!!


...She was a legend in the pagan and occult communities, pioneering an ecological focus for pagan traditions which we today may take for granted, but which was nearly uncharted territory in the 1970s.

She and Oberon were also deeply involved in the shift in consciousness within the Pagan scene toward a greater understanding of lesbian, gay, bisexual, transgender and other mariginalized folks. From this side of the millennium, it may be hard to fathom, but there was a time - within my own lifetime - when Pagan circles routinely excluded and denigrated all of the above in the name of "natural law". She was also a pioneer in exploring the ethical considerations of polyamorous relationships, through personal experience and experiment over many years of passionate advocacy.


Yesterday we laid Morning Glory’s body into the Earth, to rest in the bosom of Mother Gaea until she may return again in new flesh. I planted an apple tree over her loving heart, that someday her substance may return to us all as sweet nourishing fruit. It was a small private ceremony, attended by immediate family and about 30 of our closest family friends.

And what a beautiful and moving ceremony it was! MG’s body was carried by six pallbearers (three abreast…) across the dam to the campfire circle in the beautiful open redwood casket made by Emrys (who also dug her grave). She was laid in the center of the circle, shrouded in wrappings, blessing ribbons, chakra stones, and a burgundy velvet wrap that had been lovingly embroidered by all her Handmaidens. A drinking horn of her favorite whiskey (Tullamore Dew) was passed around the circle, and each person told of what MG had meant to them.

Then we carried her up the hill and lowered her into her grave (after first removing our tuxedoed Druid, Don, who managed to fall in without losing his top hat!). Our granddaughter and other children began throwing flowers into her coffin, in the oldest burial custom of humanity — begun over 100,000 years ago by our predecessor subspecies, the Neanderthals. Songs were sung, and tears were shed. Feasting followed.

After the hole had been all filled in, Freya arranged a lovely berm and circle of dirt clods around, planting many wildflowers (including, of course, Morning Glories) Pilgrims who visit her in times to come may consider bringing stones to replace the clods, which will soon wear away. I have seen this custom in the mountains of Peru…

Morning Glory is buried at the top of the Upper Meadow at CAW’s sacred land of Annwfn (Welsh: “Land of the Dead”) — our 55-acre sanctuary in the misty mountains of Mendocino County, bequeathed to us by our late bard, Gwydion Pendderwen, who died at Samhain 1982, and whose ashes were our first internment there. Morning Glory’s grave overlooks the campfire circle where we have held our rites of Beltane (and Walpurgisnacht) for the past 30 years. Many stories will be told of this Death of a Pagan Priestess — which has already become mythic (as was her life). And that is how we achieve immortality — for what is remembered, lives!

Arranging all the legalities for MG’s green burial has now secured Annwfn as an officially-recognized cemetery for full body burials — a final gift to the Pagan community from one of our eldest and most revered Priestesses. There is a space right next to her that is reserved for my own eventual burial — many years from now (I hope!). And over the years to come, I expect that many other Pagans will want to have their green burials at Annwfn. Arrangements can be made.

I am grateful to all of our many friends, family, lovers, waterkin, priestesses and priests who came by over the final weeks in the hospital and at home, to lend support, prepare meals, clean house, share stories, and generally take care of everything for everyone....

And now I must enter a new phase of my life, holding the Love of my life within my heart and head, and carry on The Work for both of us. There is still so much to do…


MG singing her song "The Cancer Train" on the BlogTalk Radio broadcast memorial service for Isaac Bonewits, August 2010. It's at the 10:40 mark.

A longish obit in the conservative London Daily Telegraph (July 21, 2014). Comments Oberon, "A little late! And a bit over-heady on the sex; very little on her founding the first Pagan Church in America, and nothing on the links with Heinlein's Stranger in a Strange Land."

Sad news, though not unexpected. She joins the Old Ones

The woman lived one hell of a life, and made an impact on the world. Not many can say that.

I hope that her afterlife is everything she believed it would be. R.I.P.