"Polyamory may be going mainstream but it ain't easy" 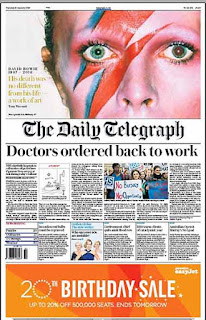 The Daily Telegraph is one of the U.K.'s major newspapers and is aligned with the governing Conservative Party (some call it The Torygraph). The current news flurry about OkCupid's attempt to go poly-friendly prompted a column in today's Women's section. The writer calls herself naturally monogamous and was in a five-year poly relationship reluctantly, but she says she drew some good things from it even so.

...Once seen as the preserve of middle aged men in Utah, or hyper-liberal flower children, non-monogamy is fast becoming the territory of perfectly unremarkable people.

When I first started dating my fiancé, a couple of weeks in, we discussed how we saw things working with regards to other people.

It’s no longer such an unusual conversation to have at the start of a relationship....

...Think-pieces about polyamory have tended to be written in active defense. I understand that the much maligned practice needs all the good PR it can get — but it does the lifestyle a disservice to pretend that it’s all rainbows, flowers and great shags.

...I spent the best part of five years in a polyamorous relationship and it was — like all relationships — a mixed bag.

One of the best things about the poly world is having more of you. Two people playing a board game can be boring, but with four it’s fun. Same goes for picnics, holidays and parties. You’re not just a couple, you’re a ready-made group and there’s something brilliant about that.

When one of you is feeling down, there are more people to cheer you up. You get more birthday presents, more sex, more laughter, more of everything. But when I say everything, I mean everything.

...I learned a lot from my experience of polyamory, even if most of that was that I didn’t really want to be poly.

People in open relationships tend to be brilliant at communicating, either by nature or by necessity. When you involve other people in that relationship, you complicate it — both emotionally and logistically, meaning a much higher level of communication is needed for things to work.

It’s something that, when I stopped being poly, I took forward into my next monogamous relationship....

P.S.: If you haven't seen my post about the OkCupid news since I put it up last Friday, I've added some updates.