Did this catch you by surprise? It did me.  (I was at Poly Living East all weekend and am writing this on the train home.) The show is a one-hour pilot for what may or may not become a series. It's been in the works a long time and airs tonight (Sunday February 5) at 10 p.m. Eastern time, 9 Central. 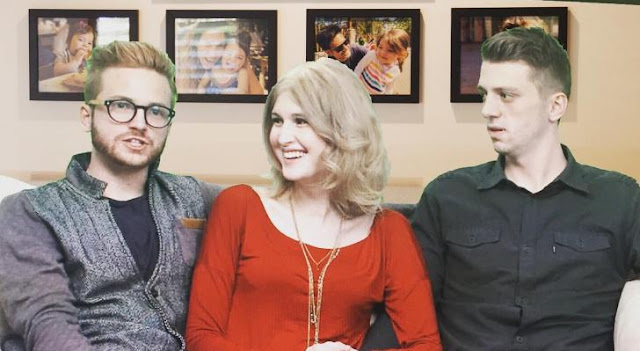 Brother Husbands, a show about a woman who is married to two men, will be premiering on TLC this evening (Sunday, Feb. 5, 2017). The show centers on a woman named Amanda Liston, who has married two men: Chad Ferris and Jeremy Johnston.

The show will be on after the TLC hit Sister Wives, and while it is about a polyamorous family, the two shows are very different. While Sister Wives features a very conservative Mormon family, the Brother Husbands family is not at all religious. They are a modern liberal family. 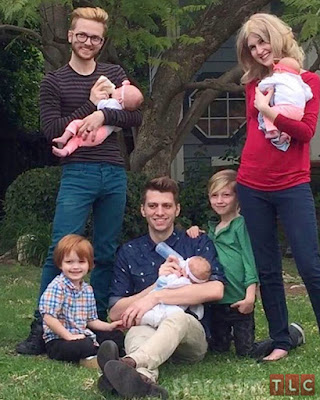 Chad Ferris was the first guy that Amanda Liston married. According to Ashley's Reality Roundup, the two got married on MTV's Engaged and Underage in 2007. The couple has been on several reality TV shows, including TBS' King of the Nerds.

Ferris and Liston have two children together. Liston also has three children with her other husband.

In some situations, Chad Ferris uses Amanda's last name and goes by Chad Liston. Many online have questioned whether he was gay, so in a comment to Starcasm, Ferris discussed the personal details of his sexuality:

"I am bisexual. Jeremy is straight. To clear up the confusion. We are all emotionally committed and connected. But I only have a sexual relationship with amanda, and jeremy and Amanda's is there own as well."

Ferris says that Amanda Liston is the head of the household while he and Jeremy Johnston take care of the kids. He seems to enjoy showing his lifestyle to the world and clearing up misconceptions.

The family is clearly a young, hipster millennial family. According to Ferris, Amanda Lipton works, and he and Jeremy Johnston take care of the kids. Ferris is a cat lover, and appears to have recently gotten a puppy.

While Ferris takes care of the kids, Liston works as a "book blogger" and makes clothing and costumes. She also has an Etsy store. Together, the famiily is into sci-fi movies and books, and Comic-Con.

Chad Ferris and Amanda Liston were married for several years before they added Jeremy Johnston to the relationship. Based on her statements, it appears that she got married to Johnston around 2015...

The article, at the entertainment mag Empty Lighthouse, includes links to three more about the three characters (Feb. 5, 2017).

For anyone who has watched Sister Wives and thought (correctly) "This show is a sexist mess," TLC just showed up. Brother Husbands is coming, and yes, it is exactly what it sounds like.

...The show's official description is vague, but wonderful. "Amanda has a very full love life with not one, but two husbands, and navigates a polyamorous relationship with both of them and their five children." I love this show already....

I don't get TLC, and anyway I'll still be on the train at 10 p.m. If you watch it, could you post your opinions in the comments?

● You can watch the full episode for free if you're a TLC subscriber, or pay to watch on YouTube.

● Why did TLC air a pilot show opposite the Superbowl?! Maybe that's why there's so little commentary on the web today. An exception is this piece on SheKnows: The Pros and Cons of Two Husbands, as Learned From Brother Husbands (Feb. 6). The first two-thirds of it:

...I just finished watching the one-time special... and I think I have a better idea of the pros and cons of polyamory on a day-to-day basis.

...Amanda is a paralegal working for the government, while Chad and Jeremy both stay at home looking after the kids and caring for the house. I must say that I was intrigued by the idea of having multiple men cooking and cleaning for me in between endlessly bottle-feeding triplets and roughhousing with the older boys. At one point, Amanda returns from her tough workday to sit in front of a lovely dinner and a glass of wine. Yes, please.

On the downside, as on Sister Wives, polyamory seems to have led to having a lot of children running around. While all of their children are adorable, and while children are just wonderful, it looks like a lot of work (and a lot of diapers) even for three parents to handle.

During one segment, Jeremy’s mom comes to meet the triplets and spread grandma love. She’s head over heels for the new babies and absolutely adorable as she meets each one of the three new baby girls. She also puts aside all of her prejudices and really tries to understand her child’s lifestyle and accept her kid’s brother husband. More people can equal more love!

Of course, having more family members also means dealing with more family drama. Several family members have bowed out of the trio’s life, and Jeremy’s mom can’t help but mention her wish for the family to get paternity tests for the triplets and also can’t hide that she’s a bit uncomfortable with the nontraditional turn her son’s life has taken. I can’t help but wonder if Thanksgiving isn’t going to be even more complicated than before.

Pro: The kids have tons of support

It was heartwarming to see the two dads joining forces to care for all five kids, with only a little territorial scuffle every now and then. And it’s a good thing because it was a little stressful even watching them care for three tiny infants plus two rowdy boys.

Con: The kids stand out a bit at school

One segment focused on a parent-teacher meeting in which the family came out as polyamorous to their oldest child’s teacher. While the teacher was welcoming, she was a little worried about how the other children in the class would react. However, there was no evidence of bullying or teasing, at least at that age....

There are no words -- no good ones anyway.

I watched the show, very disturbing, especially when they show all three of them sleeping in one bed������

This makes me happy to see. My family is my girlfriend, her boyfriend, and me. We have a great life and lots of love to go around.

I'm so confused and have so many questions now...like, idk, WHY? How did they come to the conclusion that this was the best idea? How did they meet? Was this the plan? I mean, I support whatever they want. They're consenting adults. I have the some of the same questions about sister wives to an extent. Their choice is religion based so that answers some (kinda) questions.

Why are you on this blog then? This is a poly blog.

I would be surprised if they felt the need to lie about it, for a few reasons:

1. They're already doing something people strongly frown upon, and one even clearly states he is bisexual. It would be odd if admitting to being lovers themselves was the one thing they wouldn't admit, when they're already comfortable admitting other very unusual things that will enrage some people.

2. I doubt their wife would be upset about it, unless she's a terrible hypocrite, so that eliminates a need to lie to her. Maybe she'd even be thrilled if they fell in love and became sexual partners.

3. Since the three-person relationship is based on very liberal social values, and not religion, there's no dogma saying the guys can't get together too -- which makes it quite different from Sister Wives. Superficially the structure looks the same, but the bones of each structure are different. For Sister Wives the bones are religion, sexism that says the wives can't also have multiple partners, etc etc. For Brother Husbands it's very liberal sexual values and relationship ideas, and purposeful rejection of gender roles in relation to child care.

4. I know a lot of straight monogamous men who "seem" bi or gay to some people, but aren't. Who they want to sleep with isn't related to the features that seem bi/gay to others, and I know them to be the sort of people who would have no problem going, "Hey, I thought I was straight but I finally found a guy I'm attracted to!"

In other words, if they were lovers I think they'd just say so.

I just hope they bought those poor Triplets some NEW BEDS !!!! I cringed when I saw them getting a few months older and they were still placing them , actually squishing them, in those small infant beds with NO room to move around !

This is so great! Love seeing my lifestyle represented in media :D

Is it me or does she have wigs? It's cute, just curious :)

I think as time goes on, these types of relationships will become more and more common. They are trail blazers. As more people see their stories, their minds will be open to more possibilities. Things that may be shocking now will be much more acceptable 20 years even 10 years from now.
I worry about what the kids might experience from their peers as they grow older. Junior high can be brutal. This can't be the first ever family like this so it would be interesting to meet/hear feedback from different parents and kids of families who have already been down this road.

FYI - Liston is Amanda's married name, Chad's last name. They have all known each other since they were teens.

I liked the show. Wished there was more.. but i missed the paternity test, who did the triplets belong to?

I feel like TLC may have made a bone headed decision about revealing the nature of the relationship if the husbands. To me, beyond their traits, these two are very obviously romantically involved. Sometimes networks make decisions on what they will allow the cast to reveal and I can totally see them saying a throuple situation would be too off-putting to the public.