This story has been going all around the world for the last six days, but much of the reporting has been superficial or misleading.

Here, from Gay Star News, are the basics that you may have seen:

'We wanted to validate our household... and our rights, because we had no solid legal basis establishing us as a family'

Three gay men have become the first polyamorous relationship to be officially recognized in Colombia.

The men have been in their polyamorous relationship – known as a trieja in Spanish – since 2013. They did have a fourth partner, 25-year-old Alex Esnéider Zabala. But Zabala died from stomach cancer in 2015.

‘When Alex died, we did not have any documents and it was a difficult process to reclaim his social security and assets. So these papers protects us against anyone who wants to make any claims of this kind,’ Prada told W Radio.

‘We are based on a matter of coexistence and solidarity. Here there are no powers, there are no roles, you have to negotiate. Here we all come under the same conditions.’

Bermúdez told Colombian media that they wanted to make their relationship official.

‘We wanted to validate our household… and our rights, because we had no solid legal basis establishing us as a family,’ he said.

‘This establishes us as a family, a polyamorous family. It is the first time in Colombia that has been done.’

LGBTI lawyer and advocate, German Rincon Perfetti, said the attention the thruple have received has been important for the visibility of polyamorous relationships. He said while many polyamorous couples [sic] exist in Colombia, the men’s was the first to be made official.

‘It is a recognition that other types of family exist,’ he told AFP. 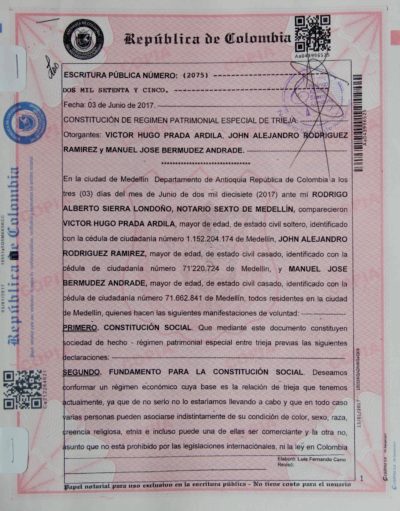 Here's the catch. As the story reports, but does not explain, the three "officially registered" their relationship. This does not mean they are legally married. It means they swore out a document, and had it notarized and recorded, declaring themselves to be a family unit with shared finances. People can do this in Colombia, as in Brazil where polyfamilies have made world news by swearing out similar documents attesting to their "polyaffective union." These affidavits are intended to carry legal weight in determining rights such as inheritance and government benefits, and in the case of couples, they do.

In other words, the three have made a legal statement. The government has only recorded the statement. How much legal weight it will carry for a group of more than two remains to be tested.


A reporter for Queerty failed to get this:

I do, I do, and I do! These three men just got legally married to each other 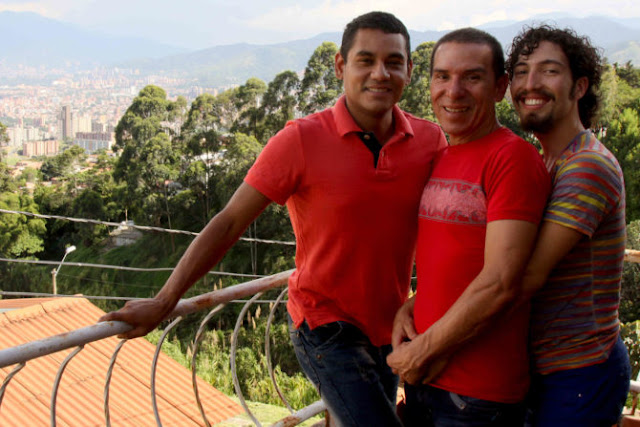 ...The papers were signed on Monday with a solicitor in the city of Medellin and establish the men as a family unit with inheritance rights.

They are the first legally recognized polyamorous family in Colombia.

Lawyer and gay rights activist German Rincon Perfetti tells the AFP [Agence France-Presse], “It is a recognition that other types of families exist.”

...Now that the papers have been signed, the trio says they’re planning a marriage celebration, which they promise will be an “artistic and cultural event.” Then, of course, comes the honeymoon!

Congrats to the happy trouple!


In contrast, the libertarian magazine Reason reported on their actual legal situation:

Three men declare themselves wed. It’s not clear if the government will recognize it.

...If the authorities legally recognize their marriage, it will be a first for Colombia. But that's a big "if."

Western reporting indicates that the three men have signed legal papers with a lawyer in Medellin in an attempt to establish themselves as a family with inheritance rights. That's not the same as saying they are legally married, and Google Translate's version of the original news coverage from the Columbia-based Semana doesn't clear up the confusion. It's clear they've submitted a notarized document declaring themselves a family. It's unclear whether it's legally enforceable and whether a court will recognize it.

We do know they can't be punished for polyamory, and that may be driving some ambiguous reporting. Colombia struck down its laws criminalizing polygamous relationships in 2001. That's not the same as legally recognizing polyamorous marriages as valid. It just means you can't be arrested and imprisoned for it. ... 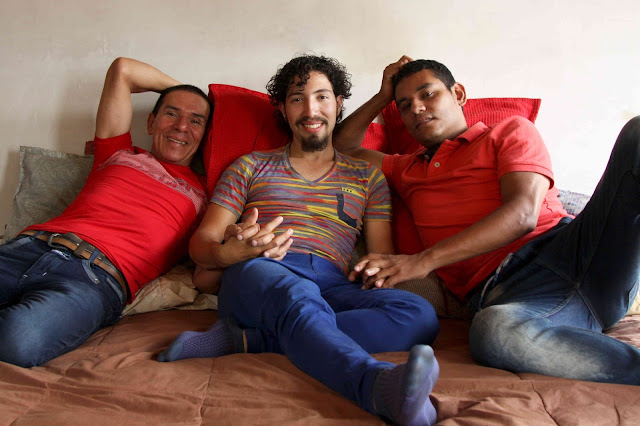 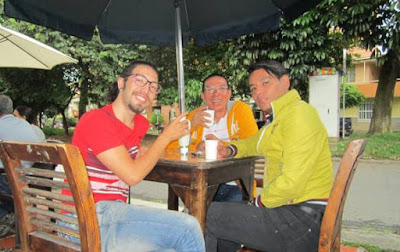 ● Video of the three as they registered their relationship.

● In the UK's Daily Mail: I do, I do and I do! Colombia's first THREE-man marriage between a 'polyamorous family' is legally recognised (June 14).

A court in Medellin, Colombia’s second largest city, has granted two husbands of a polyamorous relationship the split pension of their late partner, local media reported on Monday.

Manuel Bermudez and Victor Rodriguez, the two surviving members of the relationship between four, were initially denied pension rights after the death of their lover Alex Zabala from cancer in 2014, following 10 years of living together as a polyamorous family.

The Medellin court ordered the pension fund to retroactively pay the two men.

A third member of the family of four men was denied pension rights on claims he had only been with his partners for a year when Zabala died. ...

The decision was hailed by El Espectador as a victory for the LGBT community, a sentiment echoed by Bermudez.

In an emotional statement, he praised the ruling, deeming it a “recognition and worthwhile memory of the man we love and who loved us for ten years of his life”, and acknowledged the wider significance of the ruling.