The definition of "polyamory," and more media getting it right


My last post, about the Independent article "Straight men need to stop using polyamory as an excuse to manipulate women into casual dating" and others like it, stirred up a swarm of reactions on Facebook and Reddit pro and con.

Some people told colorful tales of sleazebags who had no interest in honest loving relationships using "poly" bafflegab on women. One told of visiting a bar where a pickup-artist class exercise was in progress, with an obvious row of nervous males approaching, one by one when it was their turn, each incoming unaccompanied woman and trying to impress her with hip-sounding polyamory buzztalk. Other readers described offenders against the word who were more clueness than scuzzy.

And there some outraged butt-hurts, who defended their right to use the word however they want regardless of what other people think it means, and if women are going to be so anti-male about it they're nasty SJWs, so there.

As the photo caption at the top of the article said: "If men have no interest in a serious relationship, and are looking to casually date multiple people, that is absolutely fair and their choice, but that is not polyamory." Which is multiple loving relationships (poly-amory, right?), which means (per the word's inventor, the Oxford English Dictionary, and all the informal online dictionaries the author found) "close emotional relationships" and "with the knowledge and consent of all partners concerned."

So it's valuable to have more media coverage like the following, which appeared a few days ago in Canada's very mainstream CBC News, Newfoundland edition:

For these young romantics, 3 (or more) is the perfect company

With big smiles and youthful faces, Melanie Lynch and Alex Wilkie look like an average happy couple on social media, head over heels in love.

While the smiles are real and the love is genuine, this couple does not have your average relationship.

They are polyamorous — meaning that while they live together, they also date other people.

"No one is cheating here," Lynch said. "Everyone is on the same page, there's good communication constantly. Partners are always talking."

The couple is part of a support group, started on Facebook, to help guide people who are either in a polyamorous or non-monogamous relationship, or who are interested in the lifestyle.

It's a mystery to the common person, Wilkie said, and something that draws a lot of curiosity.

"I think that's why we have a support group in the first place," said Lynch. "There's a big stigma against what we are doing."

Lynch and Wilkie entered into the relationship with the goal of being polyamorous. ...

..."You have to talk about a lot of hypothetical situations that you normally wouldn't have to think about," Wilkie said. "Like, if you're going on a date with somebody, is it OK if you went back to your apartment after?"

"We also have an excellent calendar together," Lynch laughed. "We're good at scheduling."

Jeff Anstey, another member of the support group, said his relationship works a little bit differently.

His partner is monogamous, but Anstey has dated other people throughout the course of the eight-year relationship.

"When we met, we were both pretty young," he said, noting they began a monogamous relationship by default. "That's kind of the way our culture is. People are taught from a young age those types of expectations, I guess, and it's kind of implicit."

But after three years together, they began talking about feelings they were having. At first they discussed a typical open relationship — seeking other sexual partners without a strong emotional connection.

Throughout their conversations, Anstey realized polyamory — something with more of an emotional connection — was more along the lines of what he was searching for.

He said his partner understands and respects his feelings, but doesn't feel the same way.

Even though his partner does not date other people, Anstey said that doesn't make him any less committed.

"Most people associate commitment with an exclusive sort of connection," he said.

"I'm very committed to my partner. We've been together for a long time … But that doesn't make feelings go away. That doesn't make, you know, other parts of who I am disappear." ...

...Lynch and Wilkie consider themselves "nesting partners," meaning they live together and intend to stay together but have other relationships, too.

"My other partner, I would refer to him as a satellite partner," Lynch said. "Someone who kind of comes in and out of my life in a different sense than Alex does."

Then there are situations where all partners are considered equals — these relationships commonly happen in groups of threes called triads.

..."Most people when you talk to them are genuinely curious," Wilkie said. "And they have a lot of questions, which is nice."


● Here's the CBC radio version: "On The Go" with Ted Blades, When One Partner's Not Enough. "Ted talks with three members of NL's polyamory and non-monogamous community" (18:12).

Writes Jef Anstey, one of the people interviewed, "This is the radio interview which the article was quoting from! It goes much more into depth; the article just snagged a few snippets." 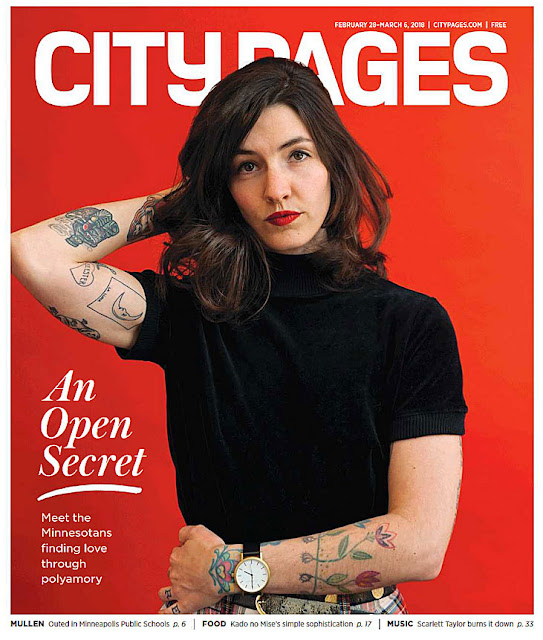 Andy is in a relationship. Make that several.

Over the past three years, the 31-year-old divorced mother with a ballerina’s physique, septum piercing, and “R-E-A-D M-O-R-E” inked on her knuckles has had three male partners — and subsequent heartbreaks.

Even the language non-monogamists use is carefully curated. Non-monogamy is an umbrella term; beneath it are myriad variations on the theme. Polyamory involves loving more than one person, with all the inherent emotional involvement and time investment. Sometimes polyamorous practitioners identify one partner as “primary,” creating a hierarchy to prioritize their many relationships.

[Other] non-monogamy subtypes [include]open marriage, [which] allows one or both spouses to have sex with other people, often in a friends-with-benefits-style arrangement. Cuckolding is a fetish, one in which a husband takes pleasure in his wife sleeping with other men; voyeurism is often involved. Swinging is a limited-time opportunity for couples to have sex with other people; post-coital contact is discouraged. (Among non-monogamists, there’s a joke that goes: “Swingers have sex; polyamorous people have conversations.”) As for polygamy? It’s the black sheep of the non-monogamy family, weighted with religious, consent, and power structure issues.

...“I keep dating these people that have never really heard of, or tried, or read any poly literature,” Andy laments. “I have to coach, educate, counsel, and date them.”

In Andy’s experience, men will often present as single when in fact they’re still coupled, however tenuously. She says some men are willing to try non-monogamy for the first time but can’t hack the honesty required for the arrangement to work.

While there have been several failures on the boyfriend front, Andy is happily dating a married couple, the wife a fashionable bookworm, the husband a beer enthusiast. She sees the couple weekly and speaks to them daily.

“I fall in love with them more when I see them together because I watch how much they love each other and well they run their lives together,” Andy says. “They counsel me. They’re the emotional, strong, foundational support in my life.”

...Karen* and Jim* are a couple who share a suburban home with Karen’s bisexual partner Rob*, where all three parent four teenagers together. Karen and Jim didn’t plan on having a non-monogamous marriage per se, though Karen often joked that it would be nice to have a wife around to help with the child-rearing and housework.

Fate introduced the couple to Rob....

...“It’s not a fear of commitment. It’s commitment, plus one,” [Karen] says. “Jim and I spent 20 years together monogamously and this is not a plug to fill a problem. This is something that the parts are greater than the whole and it would be sad to not take advantage of this opportunity for everybody’s life to be fuller, richer, better.”

Sex is a part of, but not the epicenter, of their arrangement. “It’s not as racy a story as all that. It’s about driving kids to practice or who’s going to be home any given night of the week,” Karen says. “We don’t have specific designated anything. It’s catch-as-catch-can, but we try to make sure that there’s a balance and that nobody’s getting nothing.” ...

You're opinion of how "they get it right" is simply your opinion. You seem to have a very moralistic slant to your writing these days....in fact it feels a bit like it's boardering on propaganda. Open relationships can also be loving and deeply bonded. Polyamorous relationships can also be about "relationships-lite". Romantic love is not necessarily required, and a number of poly folk never actually feel it. Nonetheless, they are loving with both their friends and their lovers (to whatever degree they authentically feel that). There's a spectrum that Polyamorous relationships- also known as Open Relationships - exist on. It's all one and the same, with different ways of expressing.

Regarding CBC News Newfoundland:
"Polyamorous couple" is an oxymoron, we shouldn't forget that.
Couple is a relationship definition, but "couple" doesn't love, the individuals within the relationship do.
So they are two persons, who are both polyamorous and who happen to be in a relationship with each other.

We should challenge the mainstream definition of polyamory as something a two person male-female couple do on the side.
So no, I don't think the media get it right.

For sure, open relationships can be loving and deeply bonded. That's when you call them polyamorous relationships!
And yes, there are polyamorous aro and asexual types--romantic love isn't the only love out there, nor is sex the only expression of love. But the point is the love, whatever form it takes, is deeply meaningful. Not, you know, interchangeable.

I think calling Alan's recent writing "moralistic" and comparing it to "propaganda" is unfair because he makes a good-faith effort to balance nonjudgmental acceptance of the many diverse expressions of CNM with the need to have language that embodies clear distinctions, not allowing the word "polyamory" to be rendered meaningless through misuse. Until the word and the major aspects of its definition become fully embedded in the broader culture, it needs to be defended, and Alan is a worthy defender, IMO.

That said, I disagree with recent attempts to characterize "open relationships" as somehow not amorous. To me, "open" simply means not hiding/lying and not closed to new relationships, which may or may not be amorous.

There is no intention being made to suggest that open relationships are NEVER loving. There is an intention however to draw VERY clear lines between these two terms.

There is a huge amount of overlap between Polyamory and "open-relationship" but they are not "the same". They are not identical. Polyamorous relationships are explicitly amorous, or in other terms, loving, emotional, etc.

But it is clear that the words create VERY different connotations and understanding from each other and deservedly so. If someone uses these words interchangeably...they are incorrect. With that being said, there is still a wide variation of definition one can use to define the terms.