"A lesson on what it means to be committed": Sophie Lucido Johnson's new book 'Many Love'


I'm reading Sophie Lucido Johnson's new book Many Love, the story of her very poly life from an early age and her growing awareness that this is an Actual Workable Thing. It's partly a graphic novel, with the words in her drawings continuing the flow of the text.


Two articles about it are just out, and more are probably on the way.

● In Broadly, an online women's magazine that's part of Vice.com:


What We Can All Learn from Polyamorous Relationships

"Many Love," Sophie Lucido Johnson's new memoir chronicling her years of polyamorous partnerships, is actually a lesson on what it means to be committed.

In the middle of our interview ... [she] casually invites me to her wedding.

“Oh yeah,” the author and artist says, “we’re having an open wedding...it’s October 13, in New Orleans. We got a ton of tacos for hundreds and hundreds of people...it’s going to be in City Park....you can come! Just search 'Luke & Sophie’s Wedding' on Facebook.”

An open wedding is almost too fitting for Johnson and her fiancé; they’re polyamorous, of course. 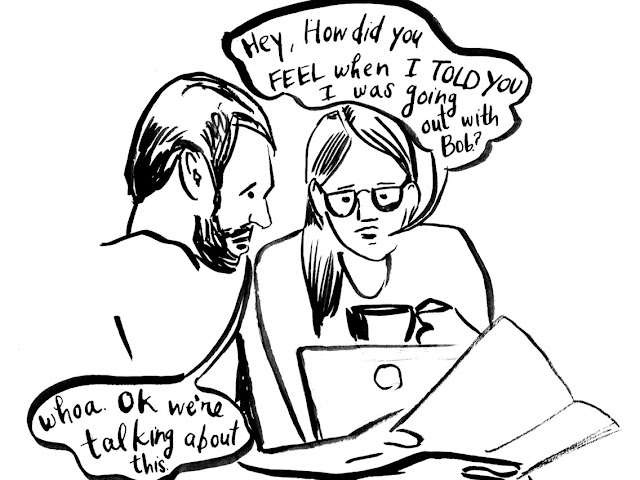 “But if you come, it’s a flower and dessert potluck,” Johnson adds, immediately balancing expectations, clarifying my role — practices that are integral to successfully maintain multiple partnerships.

Polyamory, a form of nonmonogamy, was the fourth most searched relationship term on Google in 2017, perhaps because the concept is rife with common misconceptions. ...

Many Love offers up a picture of what polyamory has looked like, over the years, for one person — and her many partners. ...

We’re with her as she’s swept away by giddy high school romances, attempting to open up adult relationships, finding best-friendship, finding primary partnership, finding community, finding boyfriends, then falling in love with a boyfriend while staying in a primary relationship. And at each milestone, she narrates her process of making sure she knows herself well enough to communicate her needs and emotions.

...It begins with a FAQ, a list of definitions, and a series of illustrated charts that serve as keys for understanding concepts integral to polyamory. Then, each chapter tackles the fundamental aspects of polyamory: deconstructing myths on singular love, exploring and prioritizing friendship, encountering casual love, having sex, experiencing jealousy, and “checking in.” And throughout, there are candid illustrations and excerpts from the canon of texts on polyamory: Sex at Dawn, The Ethical Slut, Dean Spade’s pivotal [relationship anarchy] essay “For Lovers and Fighters”.

...For Johnson, checking in mandates “transparency, communication, and enthusiastic consent.” Although it can look different for everyone, it’s a process generally fundamental to polyamorous relationships — to make sure that the parameters still work, that jealously is acknowledged, that no one partner has the upper-hand. “You’re always checking in,” Johnson muses, almost lamenting the extent to which the process is at the forefront of her relationships. “I’m so emotional as a person!”

...I found myself wishing the chapter on sex was slightly juicier. But that’s not what Many Love is about, really. ... In Many Love’s introduction, Johnson and Luke attempt to have a romantic evening with another couple, but their DIY sushi night crumbles after their cat has to be rushed to the vet. What’s exchanged between the foursome is not titillating, but tender: The other couple nurtures Johnson and Luke, asking after their needs, making dinner, cleaning up, taking care of them.

Such ability to truly support one another seems to come only after deep understanding — of self and partner — and an acceptance of the fluidity of life. “Polyamory means accepting the ways that love is going to change and checking in with yourself and your partners with the way that is going to change — it’s a great way to let go of your ego a bit,” Johnson says.

...Johnson’s explanation is simple: “I’m pro-commitment. I want people to think about commitment differently, because I think commitment is really cool, but I don’t think commitment is about sex and mononormativity.” This is what Many Love accomplishes, within the canon of texts on polyamory: Transparently chronicling what commitment in the 21st century can look like. ...


● Insider did an interview. Excerpts:

Sophie Lucido Johnson [is] a writer and illustrator who lives in Chicago. She has a few partners — a fiancé, a girlfriend, and a long-distance boyfriend. Here's what she says everyone gets wrong about polyamory.

MYTH: Being poly is the same as being in an open relationship.

Part of the confusion comes from the narrow representation of either one in popular culture.

"If you see open relationship models on television, it's always a heterosexual, usually white couple who after years of being monogamous decides to open up their relationship, and it's done in a 'hall pass' kind of capacity," Johnson told INSIDER. "That is just not the only way that this relationship structure can work. I don't even think it's the healthiest way."

In real life, polyamory is much more inclusive.

This isn't necessarily easy to do, Johnson said, but it gets easier over time.

"There's an initial jolt, and that feels really bad the first few times you go through it, but then it stops feeling bad. Jealousy has become way less of an issue for me than it once was. It's like going to the gym and getting good at doing push-ups. It's no longer something that's so painful that you can't understand why anyone would go through it."

MYTH: Becoming poly can help your relationship if it's on the rocks.

..."I'm sure there are instances where people have done that and it has worked. But in general, that's just a death sentence for your relationship. And if someone doesn't want to be polyamorous, and you do, that's a mismatch. You probably aren't going to be in that relationship long term."

MYTH: Polyamory is all about sex.

It's tempting to focus on the most outrageous aspects of any concept, and polyamory is no exception. ... For Johnson, it's more about making and keeping strong connections, whether they stay romantic or not. ... "I'm so grateful for all my many loves. I feel utterly grateful that I have all these incredible people in my life who are so willing to be honest with me," Johnson told INSIDER. "It's more work at the beginning, but it's like anything else, when you have a habit it becomes easier."

"I'm a high school teacher, and none of my students are in monogamous relationships," Johnson told INSIDER. "The idea that a book like mine could be controversial is totally over their heads. To them, it's incredibly vanilla."

Johnson suggested that people are gravitating toward a system of "relationship anarchy," which essentially means defining your relationships on your own terms, not by the terms that have been laid out by societal constructs.

There is some data to back this up. According to a 2015 Gallup poll, 16% of Americans viewed the concept of a married person having more than one partner as "acceptable." This, compared to a 7% acceptability rating in 2001, showed a 9% increase over time. ...